Over time, crop insurance coverage levels chosen by farmers have increased, and there are regional patterns in coverage elections.  Coverage level choices tend to be highest for corn and soybeans in the heart of the Corn Belt.  These regional distributions will impact the economic attractiveness of the Supplemental Coverage Option (SCO), a new crop insurance product specified in the 2014 Farm Bill (see here).  Because SCO will be more attractive where lower coverage levels predominate, SCO use likely will be more attractive outside of the Corn Belt.

Over time, acres insured with higher coverage levels have increased.  Figure 1 shows percentage of acres insured by coverage level for revenue products on corn in the United States.  Prior to the introduction of the COMBO product in 2011, revenue products included Crop Revenue Coverage, Income Protection, and Revenue Assurance.  From 2011 through 2013, COMBO plans are Revenue Protection (RP) and Revenue Protection with the Harvest Price Exclusion. 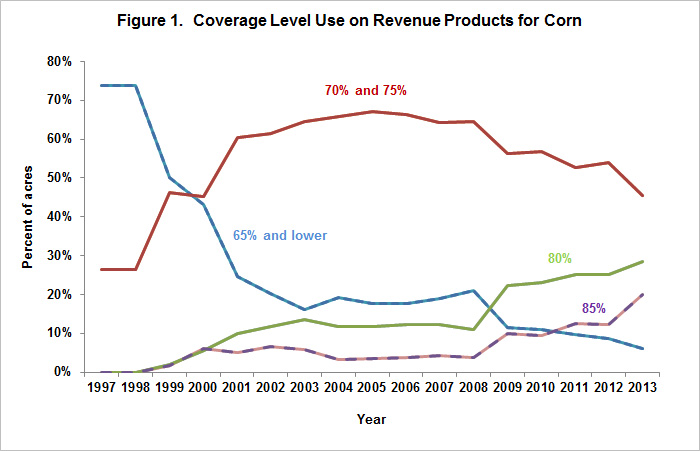 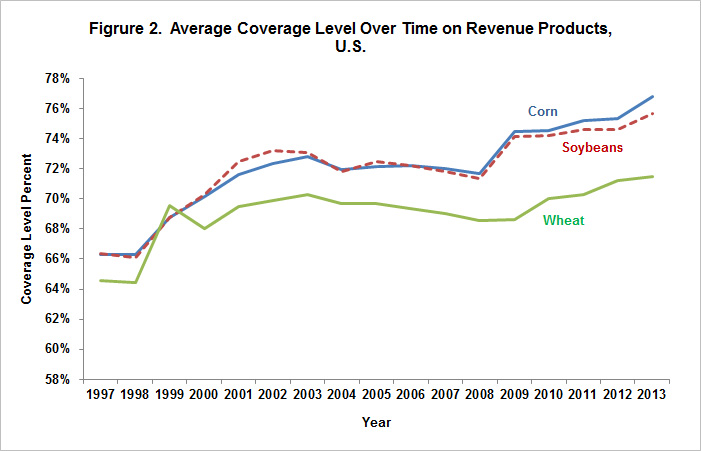 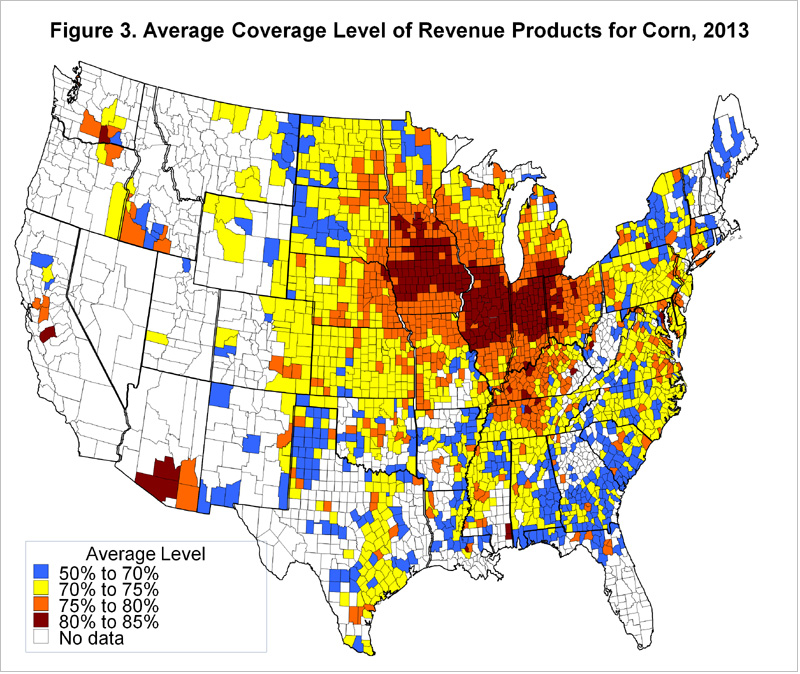 Soybeans had a similar geographical distribution.  Counties within the heart of the Corn Belt had average coverage levels above 80%, with the remaining Corn Belt counties averaged between 75% and 80%.  Lower coverage levels predominated in the Great Plains and the South. 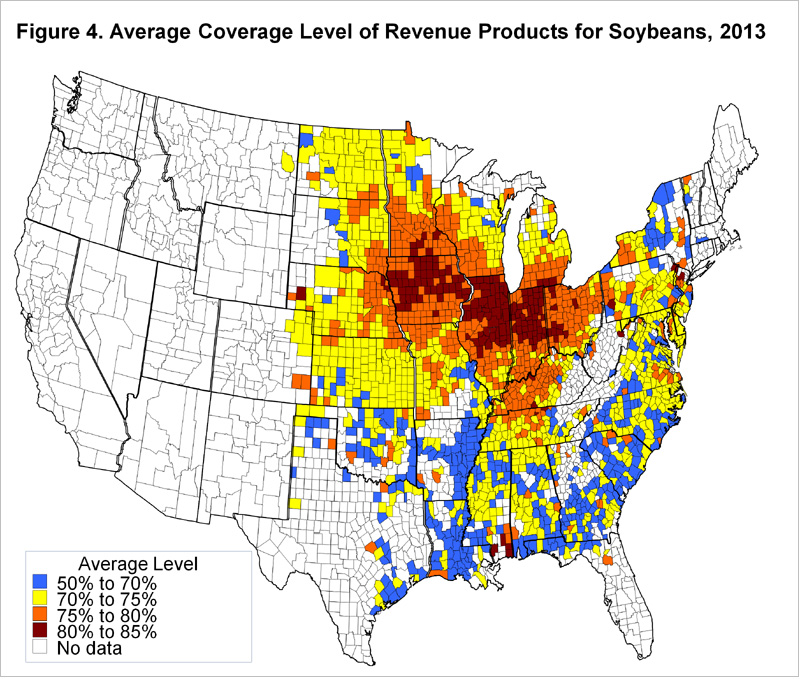 The highest average coverage levels for wheat occurred in the Northwest United States (Washington, Oregon, and Idaho), California and Arizona, and in Indiana, Ohio, and Michigan (see Figure 5).  Counties in the Great Plains tended to have lower coverage levels.  Many counties with below 70% coverage levels occurred in Montana, South Dakota, Texas, Alabama, Georgia, South Carolina, and North Carolina. 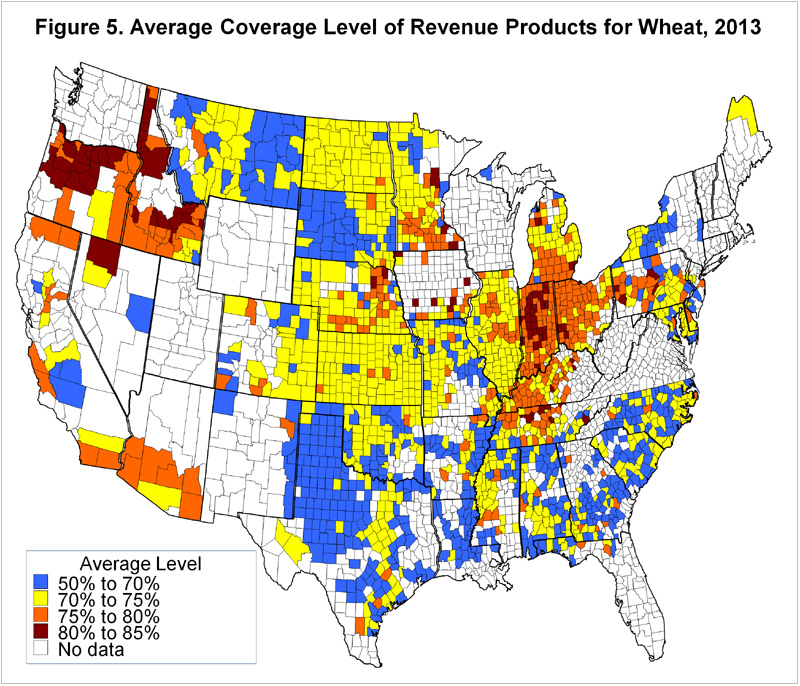 SCO will provide crop insurance at a county-level from an 86% coverage level down to the coverage level of the farm-level policy (see here for more detail).  All else equal, SCO will be a more attractive insurance option to those taking lower coverage levels on the COMBO product.

To illustrate, consider a Midwest farmer using Revenue Protection at an 85% coverage level.  Buying an SCO product from 86% down to 85% provides little coverage, and extremely small risk mitigation benefits.  There may be an incentive to reduce the coverage level on the RP policy, say to 80%.  Then, SCO could be purchased from 86% down to 80%, potentially offering modest savings in premiums because SCO has a higher subsidy than the COMBO product at high coverage levels.  However this strategy introduces additional basis risk in that a farm could suffer a yield loss while the county does not have a loss, leading to non-payments from 86% to the farm-level coverage (see here for more detail). Reducing the COMBO product coverage level and using SCO usually will result in less risk management benefits than simply purchasing RP at an 85% coverage level.  Therefore, use of SCO is questionable where high coverage levels are used.

Key to the above observations are the rates associates with SCO.  After the Risk Management Agency releases SCO rates, further judgments on SCO’s use can be made.

Where 85% coverage levels are used extensively, it is difficult to see how SCO provides meaningful risk management benefits.  SCO may have a place where lower coverage levels are used.  Even in these cases, the use of SCO is questionable and will depend on final premiums.  If higher coverage levels are not chosen because of higher premiums, it is not certain that SCO will be attractive, as SCO could have high premium costs as well.  The extent to which this is true will depend on premiums associated with SCO.  Further judgments can be made after the Risk Management Agency releases rates for SCO.

Limited risk benefits and questions on the level of SCO use leads to a question of why introduce SCO at all.  A better approach likely would have been to more directly address why lower coverage levels occur in certain geographical regions.  Making 85% coverage levels available in all areas is one response.  Making the higher subsidy SCO subsidy available on COMBO products would have been another.

Another question is why tie availability of SCO to the choice of the Price Loss Coverage commodity title alternative.  SCO is not available under the Average Crop Revenue election. Making SCO available under only one Farm Bill alternatives complicates Farm Bill commodity program decision-making, and forces producers to learn about an SCO program that in all likelihood has limited risk mitigating potential.  This will be particularly problematic if SCO rates are not known when insurance decisions are made.  Moreover, linking the decision complicates crop insurance delivery, as commodity program choice will now have to be determined prior to offering SCO.