In recent years, there have been shifts in corn and soybean acres in Illinois.  Between 1998 and 2013, corn acres have ranged from 55% of harvested acre in 2008 to 43% in 1998.  In 2013, corn acres were 50% of all acres harvested in Illinois while soybeans were 40%.  Prospective plantings released by the U.S. Department of Agriculture do not suggest large shifts in acres for 2014.  Of course, actual planting could vary from prospective plantings.

Acres harvested in Illinois were obtained for the years from 1993 to 2013 from the National Agricultural Statistical Service (NASS) for the four crops with the most acres in Illinois: corn, soybeans, wheat, and hay.  Also obtained from NASS were total acres in principal crops.  For each of the four major crops, a percentage of total acres in that crop were calculated for each year from 1993 to 2013 (see Figure 1).  For example, corn represented 50% of the acres harvested in 2013.  The 50% was calculated by taking the 11.800 million acres harvested in 2013 and dividing by the sum of acres in principal field crops (22.680 million acres) and acres in hay (680,000 acres). 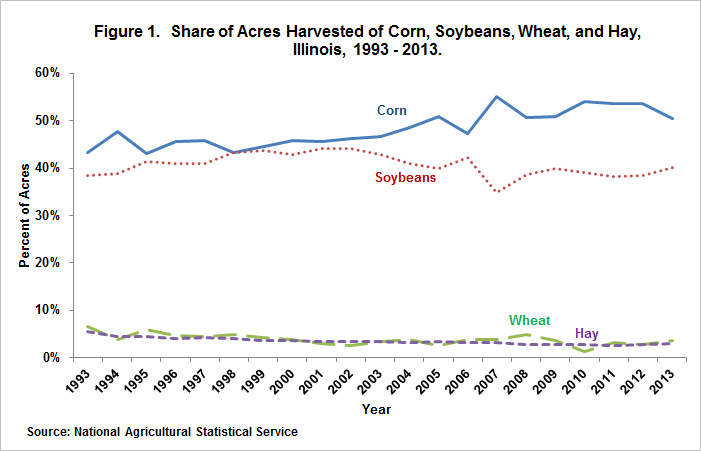