Previous posts in this series looked at issues shaping the fate of the farm bill (see here and here) prior to passage, including shifts in the political landscape and the debate over the Supplemental Nutrition Assistance Program (SNAP).  On January 29, 2014, the House of Representatives agreed to the conference report for the farm bill.  It passed the Senate on February 4th and was signed by President Obama on February 7th.  Ink from the President’s pen propelled the Agricultural Act of 2014 into law and much attention now focuses on understanding the bill’s provisions and on its implementation (more on the farm bill can be found here).  This post revisits the use of mapping technology to gain a better understanding of this farm bill’s dynamics by comparing specific farm bill votes in the House of Representatives.

On June 20, 2013, the U.S. House of Representatives voted on final passage of the Federal Agriculture Reform and Risk Management Act (H.R. 1947), the House Agriculture Committee’s version of the Farm Bill.  After a very contentious debate especially with regard to SNAP, 234 Members of the House voted against passage (roll call vote number 268 can be found here) and 195 voted for it.  With that vote, the farm bill was defeated on the House floor and the path forward was uncertain at best.  Map 1 provides a graphic representation of the vote by district and production region:  “yes” votes were in favor of passing the farm bill; “no” votes were opposed to passing the bill.

After the June vote, House Leadership then proceeded to remove the Nutrition title (which included SNAP) and passed the remaining titles of the Farm Bill with only majority party (Republican) votes (roll call vote number 353 can be found here).  A second bill that cut an even larger amount from the SNAP program was subsequently agreed to by a majority of House Members, but again only the votes of the majority party (roll call vote number 476 can be found here).  In the Fall, House leadership combined the two bills and proceeded to conference with the Senate.  Conference negotiations concluded in January and passage of the conference report was agreed to by 251 Members of the House of Representatives (roll call vote number 31 can be found here).  Map 2 provides a graphic representation of the vote by district and production region, with “yes” votes being in favor of passage and “no” votes being opposed to passage.

The analysis in this post provides an initial comparison of these two votes in the House – the first to defeat the Farm Bill, the second to pass the conference product.  While there are myriad differences between the two bills, one of the most notable involves the changes to SNAP.  The bill defeated in June would’ve reduced spending in SNAP by approximately $20 billion and included the controversial work requirements contained in the amendment by Representative Southerland.  The conference report included approximately $8 billion in spending reductions for SNAP and did not include the Southerland amendment work requirements.   Based on common knowledge of farm bill politics, the assumption is that many of the Representatives who changed their votes from “no” to “yes” were Democrats whose support was due to the smaller reduction in SNAP spending and the agreement not to include the controversial work requirements.  Map 3 provides a graphic representation of only those votes that changed from “no” and “not voting” in June 2013 (i.e., opposed to the farm bill) to “yes” (i.e., supporting the farm bill) in January 2014. 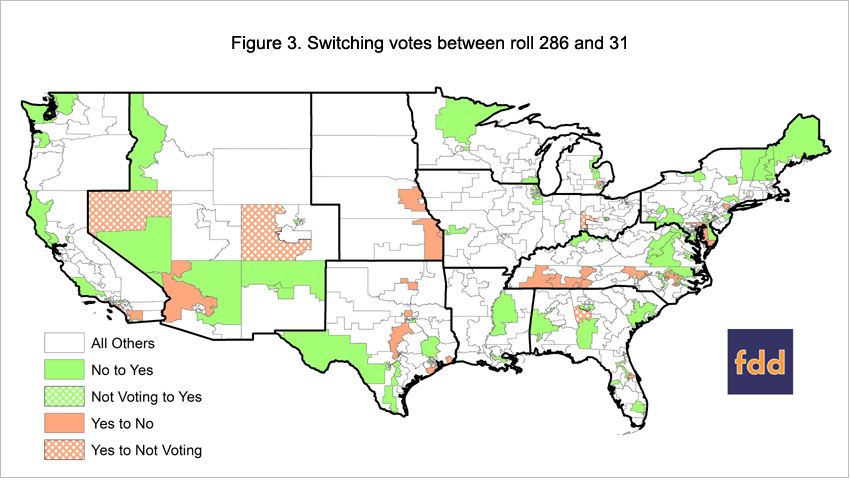 In total, 100 Members changed their vote between the two roll calls:  77 Members went from opposing the farm bill (or not voting) to supporting it and 23 Members changed from supporting the bill to opposing it.  In our previous posts (here and here) in this series, we discussed how the current political climate created a difficult environment for building the coalition needed to pass a farm bill.  The conference report demonstrates that coalition building in action as leaders on both sides of the aisle gathered enough support to pass it.  The table below provides an initial overview of the characteristics of the 77 Members who changed from opposing the initial farm bill to supporting the final bill. 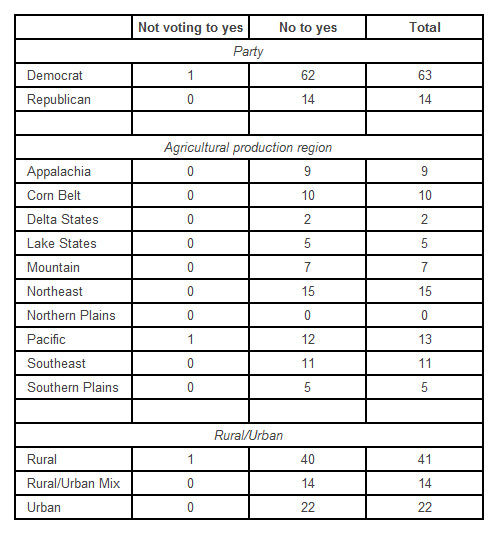 Of the votes that changed in favor of the farm bill, 63 were Democrats (82%) and 14 were Republicans (18%).  In contrast, all 23 votes that moved to opposing the farm bill were Republicans.  Looking at the regional shifts in voting and support, 15 Members from the Northeast changed in favor of the farm bill (19%), followed by 12 Members in the Pacific region (16%), 11 in the Southeast (14%), and 10 in the Corn Belt (13%).  Finally, of the 77 Members who switched to supporting the farm bill, 41 of the districts could be classified as rural (53%), and 22 could be classified as urban (29%). (For classification of rural and urban district, see this previous post.)

Additional analysis of each district and the reasons behind the Representative’s voting decision is needed to gain a better understanding of all the dynamics involved.  For example, additional work could focus on the level of SNAP participation in each district, as well as looking for other factors that drove the decision to support the farm bill.  Looking at the 14 Republican votes that changed in favor of the farm bill and the 23 that changed in opposition would also enhance the understanding of this farm bill’s dynamics.  In sum, however, we can see that much of the change in support from the farm bill came from Representatives in the Democratic Party, the coastal regions of the country, and rural areas.

In the common law of torts, there is a Latin phrase res ipsa loquitur that roughly translated means “the thing speaks for itself” and it seems particularly appropriate here.  The 2014 Farm Bill’s long, difficult journey ended successfully because a significant number of Representatives changed their support for the bill based on the compromises produced in conference negotiations between the House and Senate.  The most substantial compromise in conference was likely that involving SNAP.  The lessons of this farm bill add weight to the wisdom behind the coalition begun in 1973 between farm safety net support and food assistance for low income Americans.  A farm bill without either of those pillars is unlikely to become law.