Today’s farm bill is the direct descendant of the twin disasters of the 1930’s:  the Great Depression and the Dust Bowl.  Over time the underpinnings of farm policy have shifted from direct price support with production controls toward more market-oriented programs.  The farm bill has also expanded to include, among others, conservation programs and both international and domestic food assistance programs.

Writing and passing omnibus legislation with the scope of a farm bill has historically been a coalition building exercise – pulling together enough votes not only to pass the bill through both chambers of Congress but also to fend off problematic amendments and opposition.  For the 40 years dating to the 1973 Farm Bill (Agriculture and Consumer Protection Act of 1973), this has been accomplished by adding non-rural votes that support food assistance programs to the agricultural votes that focus on the design of commodity assistance programs.  Most of the farm bills during that time passed with bipartisan majorities in the House and Senate.

Among modern farm bill debates, the current one has exceeded past efforts in degrees of difficulty.  In 2012, it passed the Senate but was never considered on the House floor.  The 2013 iteration passed the Senate but was initially defeated on the House floor before the food assistance programs in Title IV (including the Supplemental Nutrition Assistance Program (SNAP) formerly known as food stamps) of the bill were removed.  The remaining provisions were subsequently passed by the House on a straight party-line vote, meaning only Republicans voted for the bill and all Democrats opposed it.  Reductions to the food assistance provisions were passed separately and also on a party-line vote before being recombined for purposes of conferencing with the Senate.  (More information on the current farm bill and conferencing process can be found here and here.)

The current farm bill debate has consumed nearly three calendar years spanning two Congresses.  Its tortured path and uncertain outcome raise difficult questions about the future for U.S. farm policy.  Exploring why it has been so difficult to complete can help policy makers and the agricultural community understand not only this farm bill but also provide insights for future efforts.  One way to begin is to look at the lay of the land.

Discussion:  A Picture is Worth a Thousand Words

A suitable comparison to the current effort can be found in the 1996 Farm Bill, known as the Federal Agricultural Improvement and Reform Act (FAIR).  FAIR was written under similar political circumstances such as intense budgetary scrutiny with efforts to reduce federal spending, hyper-partisan politics when a Democratically-controlled White House was at significant odds with a Republican-controlled House of Representatives – the make-up of which had substantially been altered by recent elections, strong commodity prices and farm income, and significant, substantive shifts in farm policy.  FAIR also suffered extraordinary difficulties getting through Congress and to the President’s desk, making it into law only with the help of the budget reconciliation process.  By comparison, the 1996 Farm Bill initially passed the House with a bipartisan vote and the final version that came out of conference passed overwhelmingly.  (A thorough history of the 1996 Farm Bill can be found here).

The following are two maps of the Congressional districts of the contiguous United States by party affiliation (Red for Republican; Blue for Democrat) and include the USDA farm production regions.  USDA defines ten Farm Production Regions for the lower 48 states. The regions provide rather simple and consistent groupings that are agriculturally and economically similar.  The regions follow state boundaries, however, and sometimes group areas that are not alike, particularly in states with a diverse agricultural sector.

Figure 1 shows party affiliation for the 432 voting Congressional Districts in the 113th Congress of the lower 48 states by USDA Farm Production Region.  The Republican Party, as the majority party in the House of Representatives, holds a simple majority (53.9%) of all of these districts (also referred to as seats).  Most of the regions, however, indicate an even greater degree of party control.  The Republican Party controls an overwhelming majority of the seats in the Northern Plains (100%), the Delta States (85.7%), Appalachia (72.1%), the Southern Plains (70.7%) and the Southeast (69.1%).  The minority Democratic Party holds an overwhelming majority of the districts in the Pacific (70.6% Democrat) and the Northeast (69.8% Democrat).  As shown in Figure 1, the 2013 Farm Bill was considered by a Congress with substantial differences in party alignment among the regions. 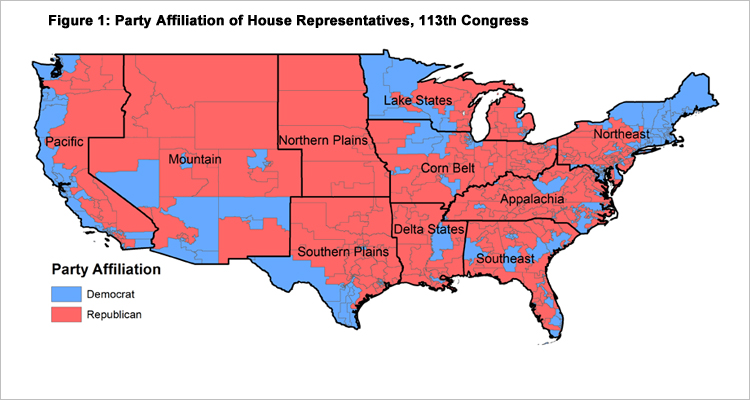 Figure 2 shows the party affiliation for the 432 voting Congressional Districts in the 104th Congress of the lower 48 states by USDA Farm Production Region.  The 104th Congress began in January 1995 with the Republican Party assuming majority status in both the House and the Senate based on the historic 1994 midterm elections.  The Republican Party also held a simple majority of all 432 districts in the 104th Congress (53.7%), yet the degree of party control within USDA production regions was less than it is today. The Republican Party controlled an overwhelming majority of the seats in only two of the regions:  Northern Plains (77.8%) and Mountain (75%).  Comparing Figure 2 with Figure 1 appears to indicate real shifts in partisan alignment in the current Congress compared to the Congress that passed the 1996 Farm Bill. 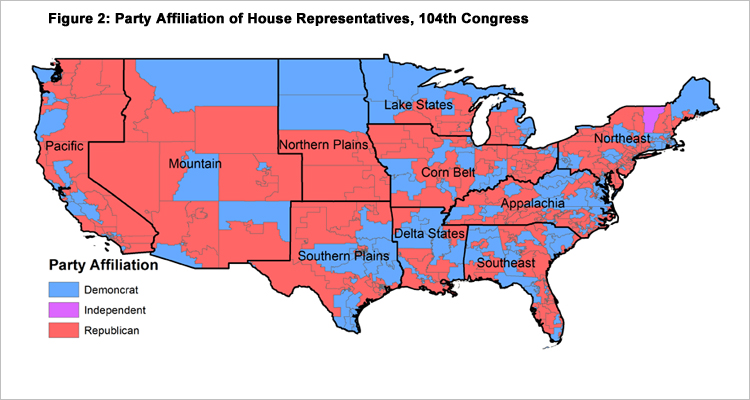 The maps provide a snapshot comparing the parties’ relative regional strengths in the 104th and 113th Congresses and Figure 3 compares the number of seats held by each party across the same production regions.  The left hand bar for each region represents the 104th Congress, and the right hand bar represents the 113th Congress.  Figure 3 also shows which regions have gained or lost seats and further highlights the shifts in party alignment seen in Figures 1 and 2.  The Republican majority has increased its control of the combined Southern regions (Appalachia, Southeast, Delta States, and Southern Plains), going from holding 53.6% of the seats in 1996 to 71.9% in the 113th Congress.  The combined Southern regions also expanded their total allotment of seats from 140 to 153 over this period.  Meanwhile, the partisan alignment in the Pacific and the Northeast has shifted in the exact opposite direction, moving to stronger representation by the Democrats.  The Pacific region has gone from 53% Republican in 1996 down to only 29.4% now.  In the Northeast, Republican control went from 45.4% of the districts to 30.2% between 1996 and 2013.  The Republican Party has also increased control in the Lake States region (45.5% to 56.7%).  Republican control of the Corn Belt, by comparison, has remained relatively constant (60.3% in 1996 to 60.0% today), although the region’s allocation of seats has declined slightly from 63 to 55. 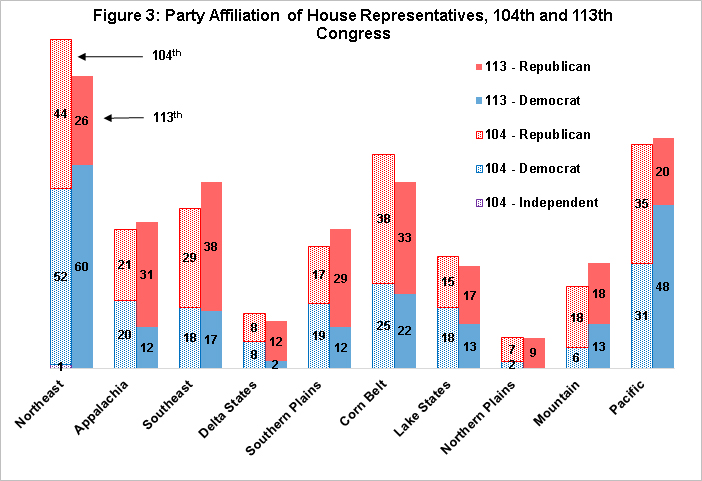 Shaping this analysis is the understanding that food assistance has arguably been the predominant farm bill issue for the country’s large urban population centers.  Other issues, such as natural resource conservation, may also be significant and require further exploration.  Because representation in the House is based on population, the regions with the greatest number of seats should also be those with the most people and cities.  While urban population centers exist throughout the country, there is a strong concentration of them in the Pacific and the Northeast regions which, as discussed above, are the only regions to see significant shifts away from the majority Republican Party to the minority Democratic Party.  SNAP has certainly been one of the most contentious issues in this farm bill discussion.  Combined, the three figures may provide an initial perspective regarding the difficult, partisan nature of this farm bill debate, particularly as it concerns SNAP.  (More perspective on SNAP can be found here).

Farm bills are not single-issue debates and generally involve significant disagreements over the commodity support programs in Title I.  (More perspective on this can be found here, here, here and here).  Farm policy for just the major row-crops supported in the bill can be divided into a three-way discussion based on regional interests.  One set of interests are the predominantly corn and soybean producing regions of the Corn Belt and the Lake States.  A second set contains the cotton, rice and peanut production interests that are found almost exclusively in the four southern regions (Appalachia, Southeast, Delta and Southern Plains).  And a third includes the predominantly wheat producing regions in the Northern Plains and parts of the Mountain region.  This breakdown is admittedly overly-simplified (for example, dairy and sugar have been excluded) but does provide for an initial comparison between the two farm bills.  The breakdown appears to indicate a more bipartisan situation in 1996.  Combined, the Corn Belt and Lake States region went from 55.2% Republican control to 58.8% Republican control from 1996 to 2013, while the Republican Party substantially increased its control of the combined southern regions from 53.6% to 71.9% of the districts between those years.  The Northern Plains has the fewest seats but has shifted entirely to the Republican Party since consideration of the 1996 Farm Bill.

The shifts in party affiliation and the degree of party control across the various regions discussed above may well provide important clues about the political hurdles that have caused many of the difficulties plaguing the current farm bill.  Further analysis is needed, particularly regarding the differences between rural and non-rural districts, as well as to examine and compare commodity assistance and food assistance in both rural and non-rural districts.  Additional analysis into commodity production across the various regions, and including dairy and sugar, is also needed.

As an introductory matter, it appears that significant partisan shifts have taken place in the House of Representatives for certain regions of the country that are key to passing a bill due to the importance of major farm bill issues to the districts in those regions.  The shifts highlighted herein could be clues to the current farm bill’s troubles and may provide lessons for future debates, but further analysis and feedback are needed.  This series is part of a much larger farm bill discussion and seeks to better understand the key dynamics behind successful development of farm bills with an eye toward the future for farm policy and the legislation that carries it into law.