Futures prices for 2014 harvest-time contracts provide estimates of prices at 2014 harvest.  During the past seven months, futures contract prices ranged by $.60 per bushel for corn and $1.00 per bushel for soybeans.  This variation results in differences in revenue forecasts and can cause difficulty in decision making.  While these price changes do cause difficulty, similar price changes should be expected in the future.  Current futures price levels suggest near long-run price levels for 2014. 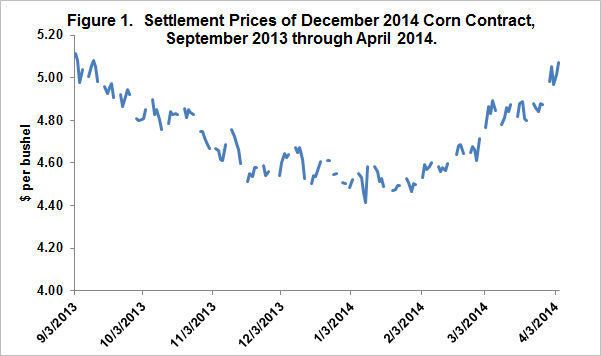 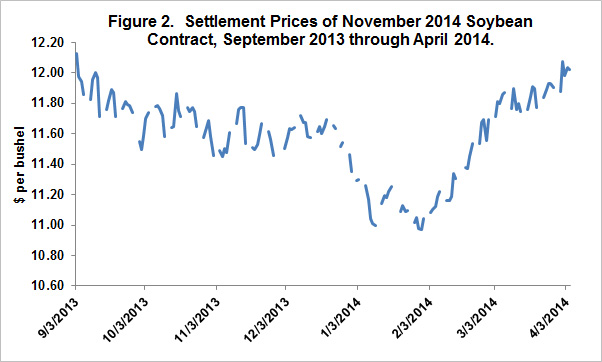 The following observations are drawn from these recent price changes.  First, price changes during the past seven month are “normal”.   While information has become available providing accurate estimate about yields, supply, and demand during this period, there was nothing to suggest structural changes were occurring that which would influence overall price levels.  Changes of $.60 per bushel in corn and $1.17 per bushel for soybeans occurred as information on supply and demand became more certain.  Just as these price changes occurred in the past, they are likely to occur in the future.

Second, this price variability makes decision-making more difficult.  Harvest time contract prices serve as indicators of price at harvest.  On farmland yielding 180 bushels, a $.60 change in corn price result in a $108 change in revenue ($108 = $.60 x 180 bushels per acre), which will result in a similar change in returns.  One decision is in setting cash rents.  A $108 change in revenue projections based on a price differences would likely result in different cash rents.  Moreover, estimates of the floor offered by 2014 crop insurance products varied between September 2013 and February 2014, potentially impacting a farmer’s risk management decisions.  Similarly, acreage decisions become more difficult as variability changes relative prices.  For example the soybean-to-corn price ratio was at a high of 2.58 on December 16, 2013 ($11.62 soybean price / $4.50 corn price.  On April 5th that ratio was 2.38, indicating that corn production is relatively more profitable on April 5th than on December 16th.

Third, there has been some pessimism regarding price. At the recent Agricultural Outlook conference, USDA released a 2014-15 marketing year price forecast of $3.90 per bushel for corn.  It is quite possible that prices may be at these levels, perhaps below, but futures contracts now suggest higher prices, leading to the fourth point.

Recent price variability represents the normal type of variability likely to exist in agriculture, presenting the usual difficulty in making decisions.  Current levels of prices are slightly above where long-run prices are expected to average, thereby currently suggesting 2014 will be a near normal year as far as prices are concerned.  Of course, this could change.  Excellent yields could lower prices and vice versa.  Demand situation could also change pricing outlook.