ACRE, or the Average Crop Revenue Election, is a revenue-based commodity program contained in the 2008 Farm Bill.  Farmers were allowed to extend enrollment in ACRE for the 2013 crop year.  This post provides estimates of state ACRE payments in 2013 for corn, soybeans, and wheat.  If ACRE pays, the payments will be made after September, 2014.  ACRE likely will make payments for corn in several Midwestern states.  ACRE is not projected to make payments for soybeans.  ACRE likely will not make wheat payments in Midwestern states.  ACRE payments are not projected for Illinois in corn, soybeans, or wheat.

ACRE makes payments when a crop’s state revenue, as measured by the state yield times the national market year average (MYA) price, is below state benchmark revenue. If this state benchmark is met, a farm benchmark also must be met before ACRE will make payments on an individual farm.  More detail on the calculation of guarantees is provided here.

To estimate payments, estimates of state yields and MYA prices are needed. State yields have not been released by the Farm Service Agency (FSA).  In this post, data from the National Agricultural Statistical Service are used to estimate yields.  Procedures used in the post will result in state yields close to those used by FSA, but will not be exactly the same yields.  Most of the deviations in state yields likely will occur in wheat.

MYA prices will not be known until the end of the marketing year: August for corn and soybeans, May for wheat.  The midpoint of ranges estimated by the World Agricultural Supply and Demand Estimates (WASDE) are used for MYA prices. 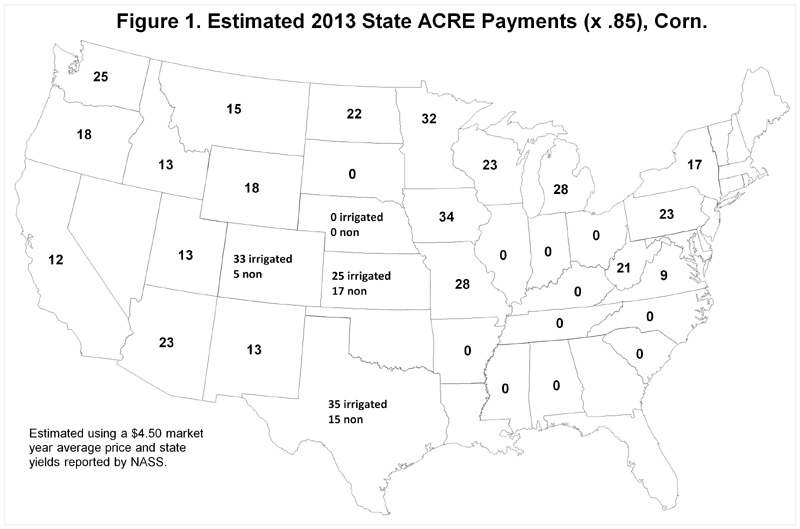 The midpoint of WASDE’s soybean price range is $12.95 per bushel.  At that price, ACRE likely will not make payments in any state. Iowa comes the closest to having a payment. A MYA price below $12.91 would result in an ACRE payment in Iowa. For Illinois to receive an ACRE payment, the MYA price would have to be below $10.92.

State wheat yields used by FSA are more difficult to estimate than state yields for corn and soybeans.  If anything, state yields are likely overestimated in this post, result in conservative estimates of 2013 ACRE payments for wheat.  Variations in state yields from those presented here are potentially larger in Western states than in Midwestern states.  No payments on wheat should be expected in the Midwest. 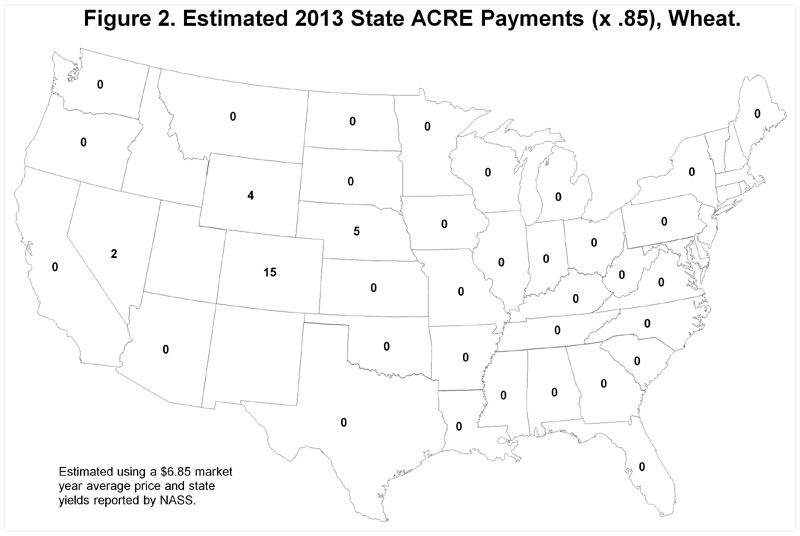