In 2013, there were 19.1 million acres insured in Illinois (see Table 1). On these acres, a total of $824 million of premium were paid, of which $368 million were paid by farmers and $456 million were risk subsidies.  These subsidies are paid by the Federal government to crop insurance companies.  Insurance payments in 2013 were $661 million. 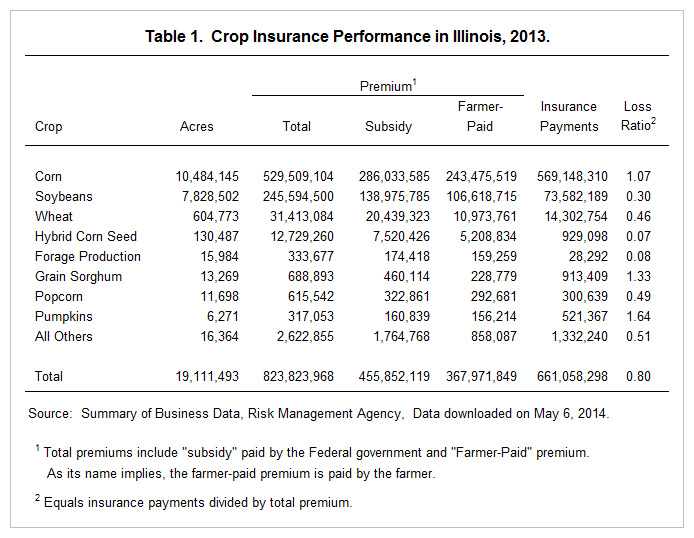 In 2013, corn had a 1.07 loss ratio.  A general price decline contributed to corn losses.  The 2013 projected price was $5.69 and the 2013 harvest price was $4.39, a decrease of 22%.  Individuals purchasing revenue products at 80% and higher coverage levels had losses unless yields were above Trend-Adjusted Actual Production History yields.

Soybeans had a .30 loss ratio.  In 2013, both the projected and harvest prices were $12.87 per bushel.  For insurance payments to occur, yield losses had to occur.  Many farmers have near to above average soybean yields, leading to few soybean insurance payments in 2013.

Losses experienced in Illinois during 2013 were considerably lower than the drought induced losses of 2012.  The 2013 loss ratio was slightly higher than the 2000-2012 average.   The harvest price for corn was 22% lower than the projected price.  This decrease was a major factor contributing to corn payments in 2013.

Payments in this post are based on Summary of Business data from the Risk Management Agency.  This data was accessed from the RMA website on May 6th.  Insurance payments may increase as additional payments are recorded in RMA’s system.  It is likely that the vast majority of payments have been already entered into the Summary of Business.