The magnitude of marketing year ending stocks may be the single most important factor that summarizes the price implications of the U.S. corn balance sheet. While there are obvious limitations to the explanatory power of a single price factor in a market in which price is determined by the dynamics of a number of supply and demand factors, the corn market clearly reacts to the USDA forecast of marketing year ending stocks contained in monthly WASDE reports. Given the importance of those forecasts, it is useful to examine the accuracy of the forecasts. In addition there has been considerable discussion of the corn stocks estimates in the most recent May 2014 WASDE report, with many analysts arguing that the old crop estimate was too low and some arguing that the new crop estimate was too high. Here, we summarize the accuracy of the forecasts of marketing year ending stocks of U.S. corn for the 1990-91 through 2012-13 marketing years and discuss the implications for the May 2014 WASDE ending stocks estimates.

Figure 1 summarizes the accuracy of each of the 17 monthly forecasts of ending stocks for the 23 years from 1990-91 through 2012-13 using box and whisker plots. For each month the box represents the range of forecast errors in the 25th to the 75th percentile of all errors over the 23 year period. That is, the middle 50 percent of the forecast errors were within the range represented by the box. Fifty percent of the errors occurred outside the range of the box and the whiskers (lines) represent the maximum forecast errors for each month over the 23 year period. As an example, the middle 50 percent of the errors in the forecasts released in May before harvest were between an over-estimate of 475 million bushels and an under-estimate of 301 million bushels. The maximum over-estimate was 1.268 billion bushels and the maximum under-estimate was 1.371 billion bushels. As would be expected, the forecasts tended to become more accurate through the forecast cycle as more and more information about crop size and consumption became available. Still, surprisingly large errors were experienced late in the forecast cycle. 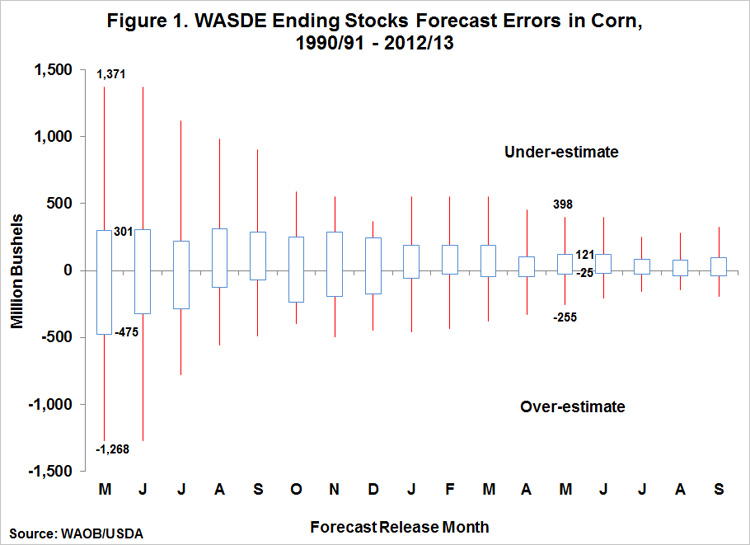 In addition to the general pattern of errors, there are other important aspects of forecast errors. One important aspect of the forecasts of ending stocks is whether the forecasts are unbiased. That is, are the average errors near zero? As can be seen in Figure 1, the monthly forecast errors do not center on zero, with a tendency towards under-estimation of final ending stocks in 15 of the 17 months. The magnitude of the monthly bias is generally small, less than 50 million bushels for 10 of the 17 months. The largest bias is associated with August (+85 million bushels) and September (+95 million bushels) forecasts in the year of harvest. None of the monthly bias calculations are statistically different from zero. So, from a statistical standpoint the ending stocks forecasts in all months are unbiased.

A second important aspect of the forecast errors is the source of the errors. Errors are the result of errors in the forecast of other elements of the corn balance sheet. Throughout the forecast cycle, there may be errors in forecasting corn consumption in each of the three major categories of feed and residual use, food, seed, and industrial use, and exports. In addition, errors in the forecast of crop size may be present from May before harvest through December after harvest since the USDA final production estimate is not released until January after harvest. Finally, errors in the estimate of stocks at the beginning of the marketing year may be present from May before harvest through September of the harvest year since USDA’s September 1 stocks estimate is not released until the end of September. The estimated magnitude of imports may also be a source of error in the forecast of ending stocks, but since that is typically a small amount it was not considered in this analysis. 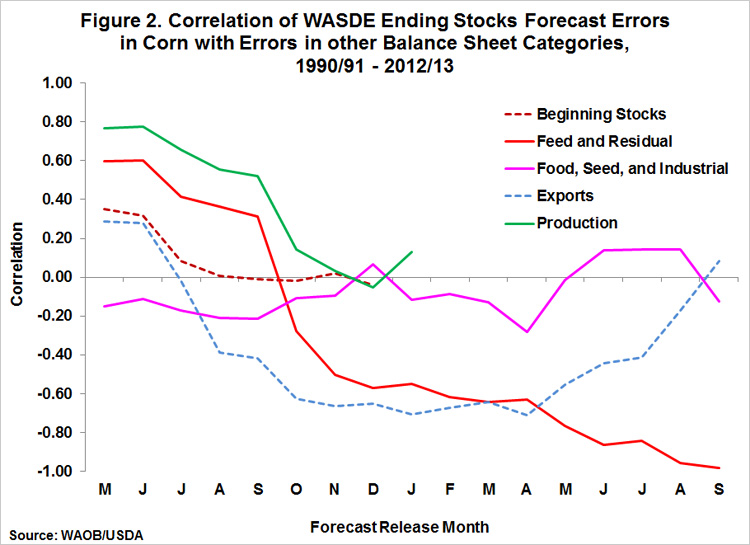 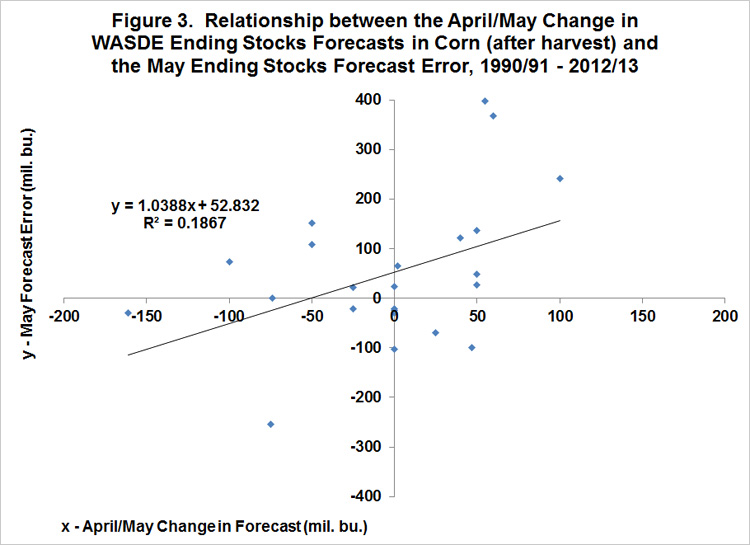