Ethanol prices went on a tear in March and April 2014 and reached new record levels exceeding $3 per gallon (farmdoc daily March 14, 2014 and May 7, 2014). A single factor did not appear explain the price rise, but instead, a combination of factors created something of a perfect storm. The question addressed in today’s article is whether the rising ethanol prices caused ethanol blending margins to go negative. The ethanol blending margin is important for several reasons, including the net impact of ethanol on gasoline prices at the pump, compliance costs for the RFS, and the pricing of RINs.

The conventional approach to computing the E10 blending margin is to compare wholesale ethanol and CBOB (or RBOB) gasoline prices. We focus here on CBOB prices because this is the feedstock for about two-thirds of the finished gasoline used in the U.S. Positive ethanol blending margins in this approach result from ethanol prices that are below the price of CBOB gasoline and vice versa. Positive (negative) margins result from blenders purchasing ethanol at a lower (higher) price per gallon than CBOB and selling the blend at the retail level at an equivalent price to CBOB. This type of analysis assumes that E10 at the retail level does not have to be priced at a discount to reflect the lower fuel efficiency of ethanol since ethanol is such a small portion of the blend and the loss of efficiency is not easily discernible by the consumer. As indicated in Figure 1, the wholesale price of CBOB gasoline at Chicago was generally higher than the price of ethanol from January 25, 2007 through May 15, 2014. The difference in the two series, however, varied considerably over that period. Close inspection of Figure 1 reveals that ethanol prices moved well-above CBOB prices during the heart of the ethanol price spike in March and April 2014. Specifically, ethanol prices exceeded CBOB prices by an average of $0.30 per gallon during the four weeks between March 20 and April 10. Since that time ethanol prices have once again settled well-below CBOB prices. 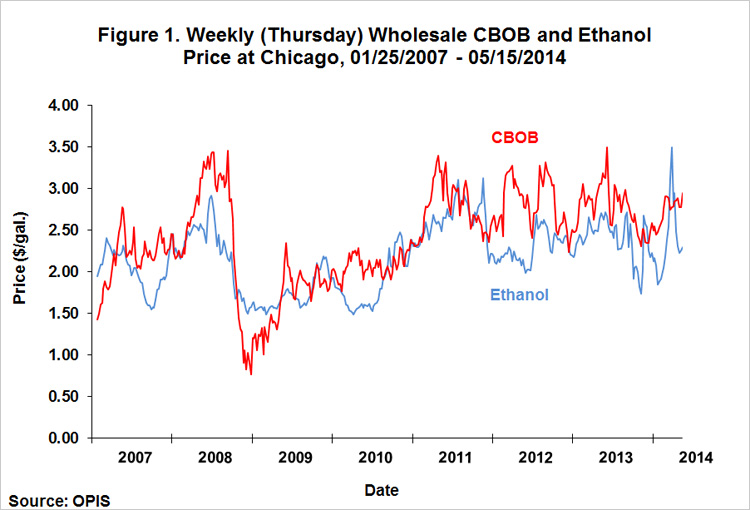 An alternative approach to measuring ethanol blending margins is presented in Figure 2. This approach accounts for the advantage ethanol has over other alternatives for enhancing octane in the motor fuel supply. For example, an analysis by the U.S. Department of Energy in November 2012 calculated a “break-even price of ethanol, above which it is more economic for the refiner to reduce ethanol volumes and alternatively produce more octane within the refinery.” That analysis indicates that the breakeven ethanol price is about 10 percent higher than the price of CBOB gasoline. That is, if the price of ethanol is less than 110 percent of the price of CBOB gasoline, there are positive economic returns to blending E10 for octane enhancement rather than producing more octane from other petroleum processes in the refinery. Figure 2 shows the ratio of wholesale ethanol to CBOB prices at Chicago over same period as in Figure 1, January 25, 2007 through May 15, 2014. The ratio was much less than 110 percent for most of the period, and during the recent ethanol price spike rose above this breakeven level only during the last two weeks of March 2014. So, despite the huge spike in ethanol prices (about 60 percent) this analysis shows that ethanol blending margins remained positive for all but a brief period. The key to explaining this surprising outcome is two-fold. First, wholesale gasoline prices were substantially above ethanol prices when the spike in ethanol prices began. This reflected crude oil prices that remain at relatively high levels and a drop in corn prices. Second, not only did wholesale gasoline prices start at relatively high levels, they increased substantially at the same time as ethanol prices. At the end of December 2013 the Chicago CBOB price was $2.49 per gallon, but had risen to $2.95 per gallon by mid-May 2014. This is an increase of almost 20 percent. 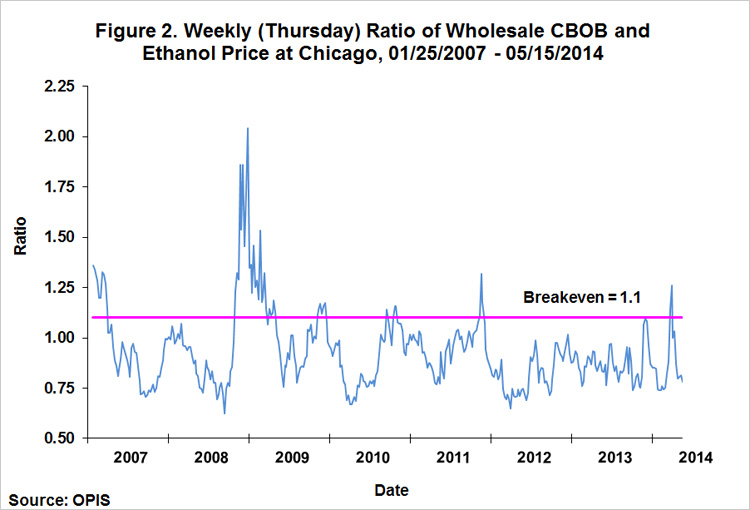 Ethanol prices increased about 60 percent to new record levels in late winter. Despite this huge increase, ethanol blending margins remained positive for all but a few weeks. This surprising outcome can be traced to the highly positive blending margins that existed at the start of the spike, providing a healthy margin cushion as ethanol prices rose, and the 20 percent increase in wholesale gasoline prices that occurred in parallel with the ethanol price spike. The fact that the ethanol blending margin became negative for such a short period of time with record high ethanol prices speaks to the firmly entrenched position of ethanol as the cheapest source of octane currently available for E10 gasoline blends.