We are approaching the six-year anniversary of the economic meltdown resulting from the financial crisis. Although many of the problems emanated from Wall Street institutions, Main Street banks also incurred losses and liquidity problems. The entire financial sector continues to deal with the long wake of the financial crisis. New bank regulations have resulted in increased lending standards, reduced investments in exotic derivatives, and higher capital positions across the commercial banking landscape.

Many of the agricultural banks did not participate aggressively in the high-risk housing or commercial real estate markets. The profitability of agriculture the past decade has helped mitigate the nonfarm real estate losses for banks lending to agriculture. However, the increase in regulatory compliance costs impacts the profitability of banks. Typically, as a share of total operating costs, these compliance costs are greater for smaller banks. There is continued pressure to merge institutions and gain potential cost economies and synergies.

Table 1 shows the distribution of commercial banks lending to agriculture by bank size. Banks with assets of less than $100 million exhibited the largest decrease in number of banks (2,502 to 1,685) as well as largest share decline (17% to 10%). These changes are a combined result of a mergers as well as asset growth of banks.

Although agricultural loans at commercial banks have increased 30 percent from 2007 to 2013, overall loan balances relative to bank deposits are at the lowest level in the banking sector in 30 years. The decline in the loan to deposit ratio at banks lending to agriculture is shown in Figure 1. The declines are a signal of weak loan and economic growth in the country. Because loans are typically the highest earning asset for most banks, the reduced level of loans relative to deposits is also a headwind for bank profitability. The average profitability of commercial banks lending to agriculture is shown in Figure 2. Bank profitability has recovered from 2010 to 2013 across all size groups. However, the smaller banks tend to trail the profitability of the larger banks.

After the crisis, regulators and policy makers have focused on the capital levels of commercial banks. The capital level of a bank is one of the strongest indicators of the financial health of the institution. Higher levels of bank capital signal a higher buffer for unexpected loan losses and declines in values of assets. A commonly used measure is the tier 1 risk-based capital measure. It is the ratio of the “core capital” relative to its risk-weighted assets. Each bank asset is assigned a risk category and an associated risk weight. For example, cash at a bank has a lower risk weight than loans. Among other factors, bank regulators consider a bank well capitalized when this ratio exceeds 6 percent, adequately capitalized when it is 4 percent or more, undercapitalized below 3 percent, and critically undercapitalized at 2 percent or below. The average tier 1 risk-based ratio increased from 15.8 percent in 2007 to 16.9 percent by year end 2013 for banks lending to agriculture. Figure 3 shows that banks have been increasing their tier 1 capital ratios since the crisis and are at levels that exceed regulatory requirements. Over 96 percent of the banks that lend to agriculture have tier 1 capital ratios that exceeded 10 percent at year-end 2013. The major improvements in capital levels have been at the larger institutions. 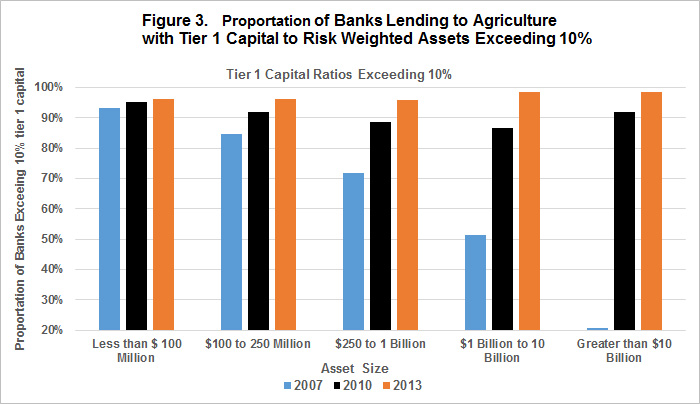 In summary, the financial health and profitability of commercial banks lending to agriculture continues to improve. There will continue to be new challenges and headwinds. New regulations will add regulatory compliance costs. Tighter profit margins for producers combined with volatile commodity prices increase the risks faced by borrowers. Moreover, interest rate risk may increase in the next 18 months. Banks will need to continue to implement prudent risk-management strategies, monitor economic conditions, and explore new opportunities to enhance competitiveness and viability. The strong financial health of the sector provides a solid base. The commercial banking sector is in a strong position to meet the capital needs of agricultural borrowers.