Price discovery is the process of finding the price through the interaction of buyers and sellers. It allows the forces of supply and demand to arrive at a transaction price, and typically assumes a competitive marketplace in which buyers and sellers are similar in number, size, and influence. This should not be confused with price determination, in which the price is established by some means – or simply announced by some authority – and buyers and sellers agree beforehand to accept whatever the price turns out to be.

Price discovery requires the interaction of buyers and sellers in some type of negotiation process to arrive at a price. These negotiations may be one-on-one, or in group settings such as a central market, an auction, or a commodity exchange where multiple buyers and multiple sellers compete for each transaction. Negotiated trading is considered by most economists and policymakers to be the fairest for both parties because it simultaneously provides the highest selling price and the lowest buying price at that particular point in time.

There has been a definite trend away from negotiated prices for most ag commodities. Despite its advantages, negotiated trading has a number of drawbacks. For one thing, it can be very time-consuming. Finding a willing counterparty, going through the back-and-forth discussions that are part of the negotiation process, and taking all the other steps necessary to successfully complete a transaction can take a lot of time. When prices are volatile, the market may move against one side or the other while negotiations are taking place.

The negotiation process also creates an adversarial relationship between buyer and seller, and few people enjoy the haggling that goes along with purchasing a vehicle, real estate, or other big-ticket item. Given the choice, most shoppers prefer going to a store and paying the listed price instead of dickering with a merchant or vendor. Even after negotiations are successfully completed, there may be a feeling of having been taken advantage of by the other party.

The USDA price reporting system was created to give buyers and sellers timely, detailed information about recent transactions so they can make informed decisions. But in agriculture as well as other industries, many buyers and sellers have decided that the benefits of receiving the “best” price are outweighed by the time, inconvenience, and other costs of one-on-one bargaining each time they need to buy or sell. The pricing methods they have adopted vary widely from one commodity to the next. In grains, much of the price discovery function has been outsourced to the larger and more liquid futures market. Basis levels are used to reflect local supply-demand conditions, and may contain some room for adjustment depending on how badly the buyer needs the commodity.

For livestock, prices at the major terminal markets served for decades as the reference point for a variety of other transactions. With the demise of the terminal markets, selective reporting of prices and the resulting loss of transparency led to the Livestock Mandatory Reporting Act of 1999 and the requirement that packers must report all prices paid for livestock and prices received for meat. Some of these prices are pegged to the prices negotiated by others, creating what economists call a “free-rider problem” in which one party does the work and others reap the benefits. Other prices are based on formulas or other mathematical relationships involving such factors as cutout values, futures prices, or feeding costs. These so-called alternative marketing arrangements (AMA) have become the predominant method of livestock pricing. In 2013 the number of slaughter cattle and hogs priced via negotiation between producer and packer had fallen to just 20.5% in cattle (Figure 1) and 3.8% in hogs (Figure 2); additional details are available here. 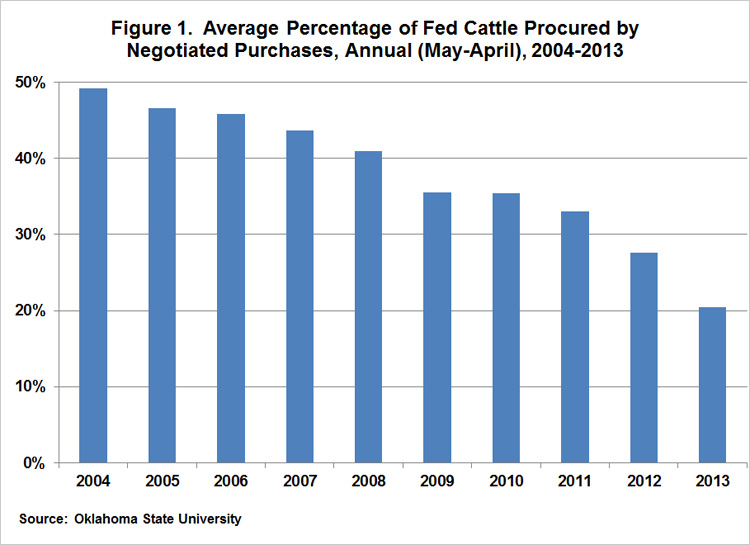 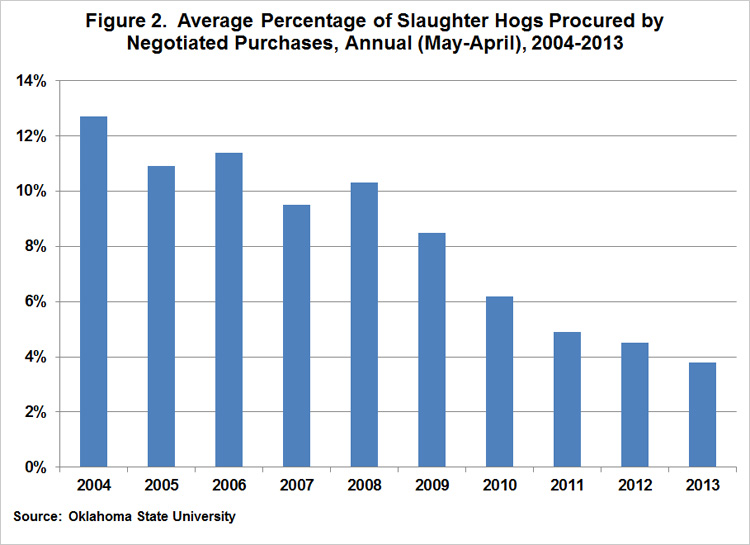 Notice that in all these situations, someone or something else performs much or all of the actual price discovery function, and everyone simply follows along. These so-called reference prices – such as the London gold fix, which serves as the global benchmark for gold – provide a convenient price that greatly simplifies matters for buyers and sellers alike. Consequently, reference prices are used in many industries for a broad spectrum of raw and semi-processed commodities.

There are two major risks associated with using reference prices: inaccuracy and manipulation. Inaccuracy occurs when the price does not correctly reflect the true value of the commodity, generally due to accidental factors, and leads to misallocation and inefficiency. In simplest terms, all that most buyers and sellers want is a price that is fair and reasonable. Without a negotiated price on a representative sample of transactions for comparison, it is impossible to know if a non-negotiated price is fair or reasonable.

Manipulation occurs when the price is intentionally distorted, and likewise leads to misallocation and inefficiency. This can happen when the current price on a small number of transactions and/or a small dollar value is used to establish the price on a later transaction involving a large quantity of the commodity – also known as “the tail wagging the dog.” Under these conditions there is an economic incentive to distort the price.

These issues are not unique to the agricultural markets. In the 2012 LIBOR case, quotes supplied by a handful of entities were used to value $350 trillion in interest rate derivatives; creating an incentive to misreport prices and manipulate the market. A similar problem was uncovered in 2013 in the $5.3 trillion-a-day foreign exchange markets; this investigation is still underway. In both instances, fines and other sanctions were imposed on major European and American financial institutions, prompting market participants and regulators to take a closer look at how prices are established.

Last week the World Gold Council announced plans to reform or replace the London gold fix. This follows last month’s statement by the London Bullion Market Association that it will stop conducting the London fix for silver prices on August 14, after 117 years of operation. Both steps have been attributed to a recent rash of antitrust lawsuits against the banks involved in setting these prices.

As the world’s financial markets come under increasing scrutiny, policymakers and regulators could benefit from reviewing the history and performance of pricing methods in the U.S. ag markets. While the scope and potential impact are much greater in the financial markets, the agricultural markets demonstrate that these problems are anything but new, and that developing effective solutions will be anything but easy.