July 10 marks the two-year anniversary of the Peregrine Financial Group/PFG Best brokerage firm bankruptcy. While PFG did not attract nearly as much attention as the MF Global collapse, it contains some important lessons for readers directly or indirectly involved in the futures/options markets.

PFG was founded by Russell Wasendorf, Sr. in 1992 and grew rapidly by acquiring part or all of brokerage firms with histories of regulatory problems. Questionable practices at the acquired firms continued at PFG, leading to fines and other sanctions by the CFTC and the National Futures Association, the industry’s self-regulatory group. PFG’s disciplinary history is available here.

In 1993 a routine audit raised questions about PFG’s handling of customer funds. Subsequent audits led regulators to order PFG to raise additional capital, but instead PFG falsified its financial statements to bulk up its capital position.

Wasendorf began to systematically forge PFG’s financial statements in 2006. The scheme involved renting PO Box 706 in Cedar Falls, Iowa, where PFG had it headquarters. Wasendorf himself received all bank statements from US Bank. He then used a computer, scanner, and Photoshop to doctor the numbers and replace the bank’s return address with PO Box 706. These falsified statements were forwarded to regulators and to PFG’s accounting department, who were unaware of his actions.

Regulators concluded from the bank statements that PO Box 706 belonged to the bank, not Wasendorf, so all requests for financial information were sent to PO Box 706. Wasendorf intercepted these requests, forged the necessary documents and sent them directly to the regulators, bypassing the bank. This ruse continued until the National Futures Association switched from hard copies to electronic statements, leading to Wasendorf’s attempted suicide on July 9, 2012 and the collapse of PFG the following day.

Wasendorf also had been embezzling customer funds, possibly going back as far back as the 1990s. An audit conducted immediately after the firm collapsed revealed a $200 million shortfall in customer funds. Wasendorf pleaded guilty to stealing “at least” $100 million and is serving 50 years in federal prison. The exact amount taken remains unknown, in large part because the firm had been operating on fabricated financial information for so many years.

According to the bankruptcy trustee, PFG had approximately 17,000 futures customer accounts. Settling these customer claims has been extremely difficult for a number of reasons. First, because PFG’s records were in such poor shape, it was unclear how many customers the company actually had. When customers were asked to step forward, there were three times as many claims as initially expected. Eliminating duplicate and disputed claims – such as those by general creditors who attempted to be classified as futures customers so they could receive preferential treatment under the bankruptcy laws – has been a time-consuming process.

Second, there is an ongoing legal battle between over-the-counter (OTC) accountholders who traded foreign currencies and precious metals with PFG as the counterparty or who held physical precious metals in their accounts, and regular futures/options customers who traded on exchanges with PFG as the broker. The trustee has argued that these OTC and physical metals traders are not “customers” under CFTC rules, and the next step in this dispute will be a court ruling on July 16.

Third – and perhaps most important – there isn’t enough money to go around. Customers who traded on non-US exchanges, known as “30.7 customers” after the relevant section of the CFTC regulations, have received 85% of their funds so far, and eventually could recover 100% of the approximately $28 million in 30.7 customer funds held at PFG. But customers who traded on US exchanges, known as “4d customers,” are likely to come up considerably short. To date they have recovered just 37% of the estimated $372 million in 4d customer funds held at PFG.

Since the latest distribution of customer funds in December 2013, the bankruptcy trustee has obtained the release of $14 million in customer funds plus a $1.25 million cash payment from JP Morgan, and clawed back $2.85 million paid to Wasendorf’s ex-wife as part of a 2010 divorce settlement. Still pending is a suit filed by the CFTC against US Bank, alleging that the bank was negligent in allowing Wasendorf to use customer funds as security against loans for:

In addition to various penalties, the CFTC complaint calls for full restitution to PFG customers. Readers can read the complete details here.

Despite these actual and potential recoveries, they total far less than the $212 million needed to make PFG’s 4d customers whole. This $212 million figure is based on a calculated estimate of $372.5 million in 4d customer accounts held at PFG when it failed, minus the initial 4d distribution of $111.75 million when the accounts were transferred to another brokerage firm, the interim (second) 4d distribution of $27.5 million in December 2013, and 4d reserves of $21.099 million held by the trustee on June 15, 2014 (see Table 1). 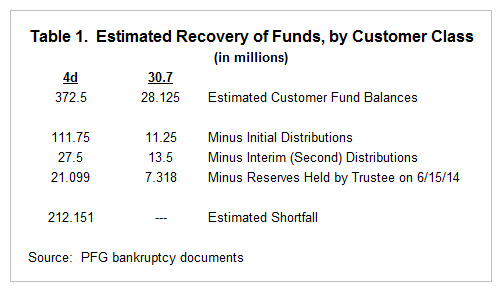 In the MF Global bankruptcy, several legal settlements with major financial institutions allowed customers to recover 100 cents on the dollar. In contrast, PFG was a much smaller firm, so there are fewer avenues for recovery and most of the damage was done by Wasendorf, whose assets were sold early in the bankruptcy process. Even if US Bank pays CFTC the full $44.5 million listed above, and the OTC and precious metals accountholders receive nothing, PFG’s 4d customers still will be missing 45% of their money.

Despite all the safeguards built into the system, determined criminals always seem to find ways to get around the rules. However, this fact doesn’t excuse the lack of progress in finding ways to protect customer segregated funds and quickly make customers whole while the bankruptcy process recovers any missing money. The MF Global failure was the eighth-largest bankruptcy of all time and involved some prominent individuals, all of which helped to keep the customer funds issue on the front page. But since the final MF Global payments were made, protecting customer funds in a brokerage firm failure has dropped out of sight as priority issue.

A four-part series of farmdoc daily articles (January 15, 2014; January 24, 2014; February 5, 2014; February 26, 2014) describe various proposals to better protect customer funds, and like all proposals each has its own strengths and weaknesses. Unfortunately, it appears that the opportunity to fix this issue is slipping away. This also happened in the late 1970s, when interest in making industry-wide changes faded away and the underlying problems were left unaddressed, only to reappear in 2011-2012.

It should be emphasized that the vast majority of brokerage firms and employees are law-abiding and ethical, and situations like PFG and MF Global are rare events. But without any substantive progress to better safeguard customer funds, customers are being left to fend for themselves. The CFTC website and the NFA website provide information that may help customers avoid an unpleasant and costly experience.