In a previous farmdoc daily article (June 11,2014) we concluded that the recent shift in the U.S. net ethanol trade balance, particularly since October 2013, has contributed to the continuation of high ethanol prices relative to corn prices and the resulting historically large margins for ethanol producers. Here we examine some of the details of the shifting trade pattern. In addition, we discuss the potential implication of this shift along with the recent increase in crude oil prices for the prospects of U.S. ethanol production and corn consumption.

Figure 1, which was included in last week’s article, clearly reveals the recent decline in U.S. ethanol imports and expansion in U.S. exports starting in October/November 2013. Imports and exports were evenly balanced in September 2013, but net exports were 25 million gallons in October 2013 and averaged nearly 60 million gallons per month from November 2013 through April 2014. U.S. imports are almost entirely from Brazil, directly or indirectly through countries in the Caribbean Basin Initiative. The decline in imports since late 2013 reflects the declining role of Brazilian ethanol in meeting the advanced biofuels portion of the Renewable Fuels Standards (RFS) in favor of biodiesel. 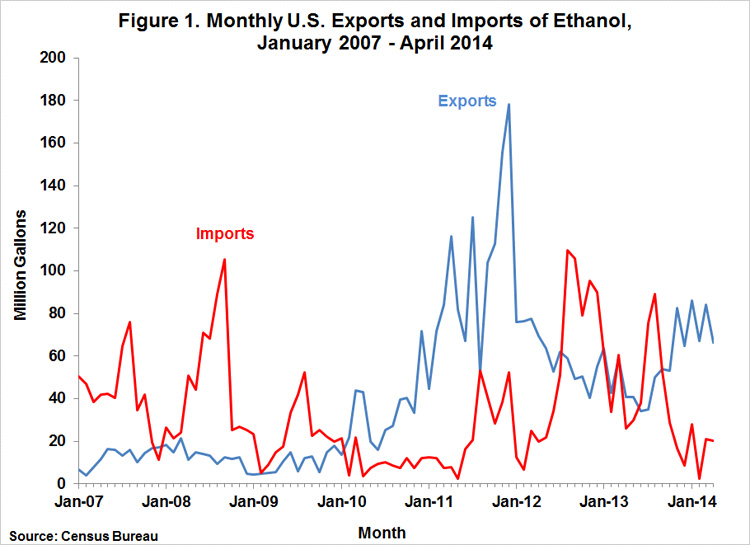 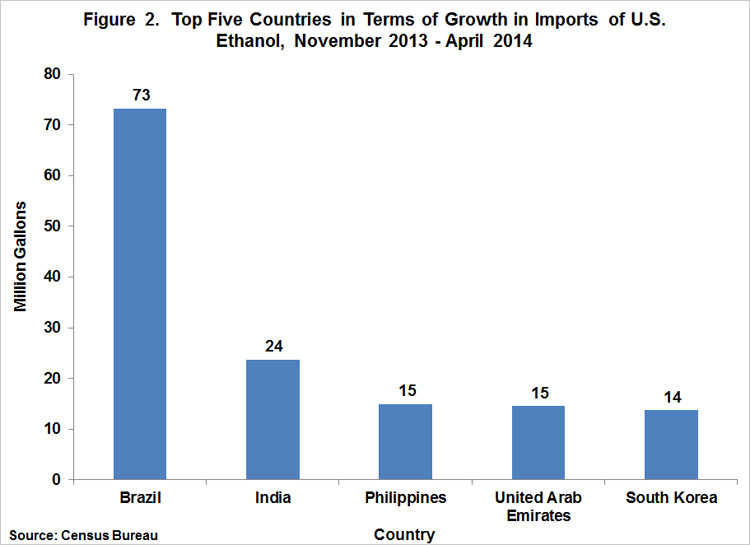 Prospects for a continuation of the positive trade balance depend on a number of factors, but two will be most important. One is the relationship between ethanol and gasoline prices. The recent run-up in crude oil and wholesale gasoline prices and the decline in wholesale ethanol prices (Figure 3) have made ethanol attractively priced as an octane enhancer and as a substitute for other gasoline feedstocks. A continuation of that favorable price relationship would be expected to increase both world consumption of ethanol and exports of U.S. ethanol. A second factor is the fate of the biodiesel tax credit. If that tax credit is extended, biodiesel will continue to be favored in meeting the RFS for advanced biofuels resulting in minimal imports of Brazilian ethanol. Prospects seem favorable for both of these conditions to continue. Monthly U.S. trade data will be monitored closely to see if the favorable trade balance in fact does continue. 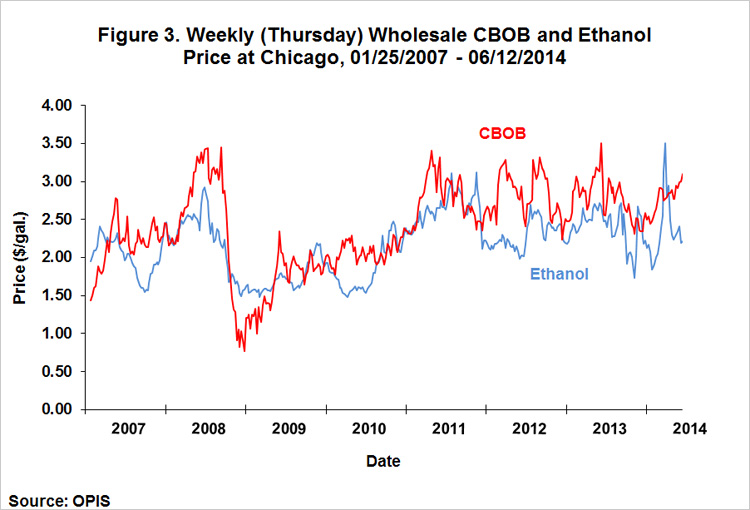 Much of the discussion about domestic ethanol consumption is centered on the EPA’s final rulemaking for the renewable fuel mandates for 2014 and beyond. That discussion tends to imply that the EPA rule making represents both a minimum and maximum for domestic renewable biofuel (ethanol) consumption. However, there is growing opportunity for domestic ethanol consumption to expand beyond both the E10 blend wall and mandated consumption levels due to higher gasoline prices relative to ethanol prices. Positive blending margins should incentivize the expansion of consumption of higher blends of ethanol, both E15 and E85. The pace of expansion will be determined by expectations for the duration of favorable blending margins and the speed at which the deployment of infrastructure can be put in place. The duration of higher crude oil prices will be influenced by the extent and duration of production interruptions in the Middle East.