The ethanol production industry is in the midst of a long “winning streak” in terms of profits. The current run of historically high profits began in March 2013 and was punctuated by a spectacular spike during February-April 2014. As highlighted in two recent farmdoc daily articles (March 14, 2014 and May 7, 2014), the high profits have been driven by a combination of steady or rising ethanol prices and falling corn prices. The latest article concluded that, “Economic logic suggests this situation is unsustainable, and either ethanol prices must adjust lower or corn prices higher to restore a long-run equilibrium in profitability. The most likely scenario is one where ethanol prices bear the brunt of the adjustment, eventually dropping as much as $0.40 per gallon from present elevated levels.” While ethanol prices are currently much lower than the peak in April, they persist at high levels relative to corn prices, which have continued to decline (Figure 1). As a result, ethanol production profitability remains about a dollar per bushel above the long term average that has been experienced since January 2007. The purpose of today’s farmdoc daily article is to propose an explanation for this pricing and profitability puzzle. 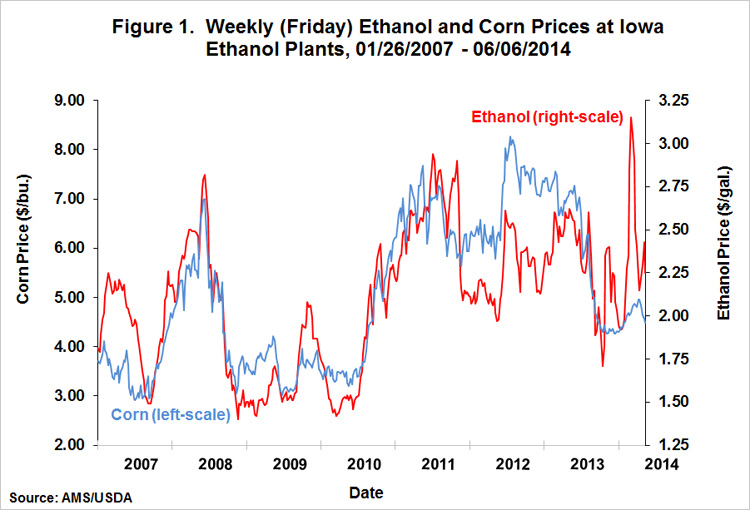 As the above discussion highlights, the extended period of ethanol production profitability appears to defy basic economic logic. In simplest terms, if the ethanol price is too high relative to the price of corn, then either the ethanol price must fall or the corn price must rise in order to restore the level of profits to a long-run equilibrium. The constraint represented by the E10 blend wall actually allows an even more specific prediction to be made, as outlined in a farmdoc daily article on October 9, 2013. The model presented in that article suggests that with a binding E10 blend wall, as now exists, ethanol prices should be ultimately determined by corn prices regardless of the RFS mandates. (This result has been noted previously by several other writers, including Professor Wallace Tyner of Purdue University.) This expected relationship is depicted in Figure 2. The ethanol demand curve has a vertical (perfectly inelastic) segment at 5 billion gallons in order to represent the demand for ethanol as an MTBE oxygenate replacement. It is vertical since non-ethanol alternatives are assumed to be prohibitively expensive. The demand curve then becomes flat (perfectly elastic) for ethanol prices equal to 110 percent of CBOB gasoline prices between 5 and 13 billion gallons. This breakeven point reflects Department of Energy research on the value of ethanol as an octane enhancer in gasoline blends. The demand curve becomes vertical again to reflect the E10 blend wall, which is assumed here to be 13 billion gallons. The price of CBOB in this particular example is assumed to be $3.00 per gallon. 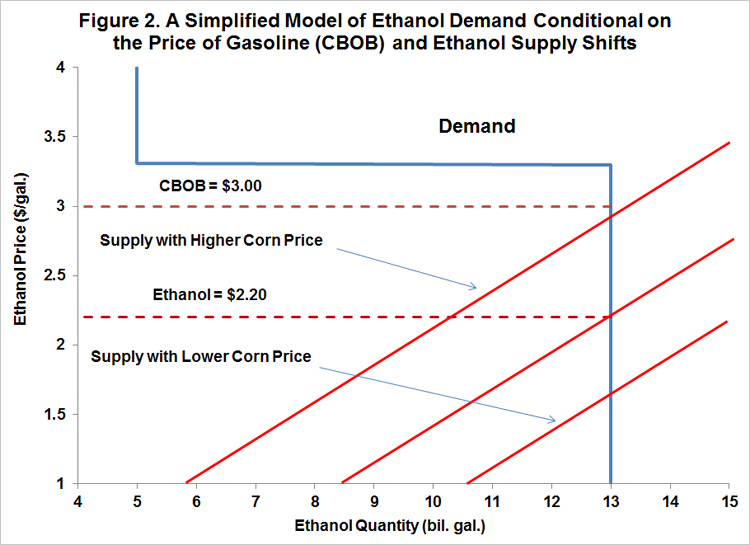 The supply function assumes the typical continuous positive relationship between ethanol price and quantity produced (absent trade), all other factors constant. It is assumed, however, that ethanol supply in the short run cannot exceed production capacity of about 15 billion gallons. The intersection of the supply and demand curves determines the equilibrium price and quantity of ethanol blended. The primary shifter of the supply function is the price of corn because corn is the most important input cost associated with ethanol production in the U.S., representing about 80 percent of total variable costs of ethanol production. At higher corn prices (all other factors unchanged), less ethanol would be supplied at each price of ethanol, shifting the supple curve to the left. Similarly, lower corn prices would shift the supply function to the right. The model in Figure 2 shows that the equilibrium quantity of ethanol produced and blended is unchanged for a wide range of shifts in the supply curve. In this particular example, the equilibrium quantity of ethanol is stuck at the E10 blend wall for all shifts in the supply curve that result in an ethanol price less than $3.30 per gallon. If one assumes that shifts in the supply curve of ethanol are solely due to the changing price of corn, then, up to an ethanol price of $3.30, the price of corn completely determines the price of ethanol.

If the theory outlined in the previous section is correct, ethanol prices should have reasonably quickly receded back to a level consistent with corn prices and a small profit level and continued to recede as corn prices declined. Factors such as a harsh winter that disrupted ethanol transportation might explain large ethanol production profits in the short run, but are not helpful in understanding the extended period of large profits. So, what is the explanation for the long period of relatively high ethanol prices and large profits? Notice that the previous discussion of ethanol pricing theory explicitly excluded the role of ethanol trade. The demand curve for ethanol in Figure 2 is altered if net ethanol trade is included in the analysis. In particular, the demand for ethanol exceeds the domestic blend wall in the case of net ethanol exports. That is, the portion of the demand curve depicted as vertical at the blend wall would have some negative slope beyond the blend wall, depending on the magnitude of net exports. This would effectively “unbind” the ethanol market from the constraint represented by the E10 blend wall.

As shown in Figure 3, the U.S. has experienced large swings in both imports and exports of ethanol, due to a variety of factors. Early in the period shown in Figure 3, ethanol imports were driven by limited domestic ethanol production and the necessity of replacing MTBEs as an octane enhancer in the domestic motor fuel supply. Later in the period, imports were influenced by the meeting of a large portion of the advanced RFS mandate with Brazilian ethanol. The magnitude of imports has also varied depending on the price and availability of Brazilian ethanol. Imports declined last year as biodiesel became a cheaper alternative for meeting the advanced RFS mandate and imports continued to decline in 2014 due in part to the EPA preliminary rulemaking to reduce biofuels mandates. U.S. ethanol exports have been driven by a number of factors that include biofuels mandates in other countries, availability of ethanol from Brazil, and U.S. ethanol prices relative to other motor fuel feedstocks. The surge in exports in 2011 was driven by reduced supplies of Brazilian ethanol. After declining for much of 2012 and 2013, however, exports began to increase in late 2013. 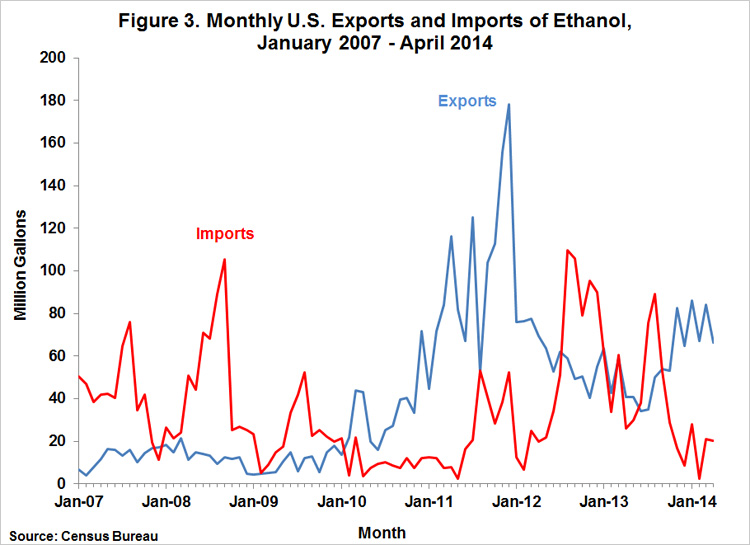 The relationship between monthly net U.S. ethanol exports (exports minus imports) and domestic ethanol production profits is depicted in Figure 4, where the recent surge in net ethanol exports is very evident. The monthly production profits are computed by taking the monthly average of weekly profits net of all variable and fixed expenses presented in recent farmdoc daily articles on ethanol profits (March 14, 2014 and May 7, 2014). The figure suggests some positive relationship between net trade and ethanol production profitability. The correlation coefficient (which can range from -1.0 to +1.0) is +0.22 for the entire period. However, the correlation between net trade and profitability for the period beginning in 2013 is +0.63. This relationship provides compelling evidence that surging U.S. ethanol exports and declining imports in recent months explains the high ethanol prices relative to corn prices and the resulting extended period of large ethanol production profits. These results suggest that, at the margin, importers of ethanol are outbidding U.S. ethanol buyers. 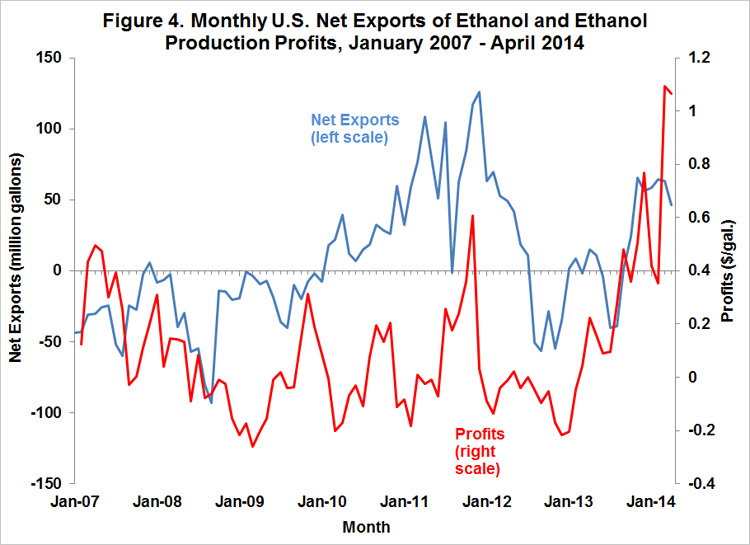 With generally good growing conditions and prospects for a large U.S. corn crop, the expectation is that corn prices will remain well below the levels experienced in 2012 and 2013. Lower corn prices in turn, have been expected to result in declining ethanol prices and a return to more normal profit levels for the domestic ethanol producers. However, it appears that the recent surge in net ethanol exports has prevented those expected declines. If that is the case, prospects for ethanol trade will continue to be a crucial factor in determining ethanol prices and production profits. This in turn can have important implications for usage of corn in ethanol production. Next week, we will examine the details of the recent surge in net U.S. ethanol exports in order to assess those prospects.