The 2015 Illinois Crop Budgets are available in the management section of farmdoc (click here for the budgets). Budgets are given for corn, soybeans, wheat, and double-crop soybeans grown in northern, central, and southern Illinois. Central Illinois is further divided into categories for high and low productivity farmland. Overall, 2015 returns are projected at the same levels as 2014 returns, which are considerably lower than returns from 2010 through 2013. These lower returns signal the need to reduce 2015 cash rents. 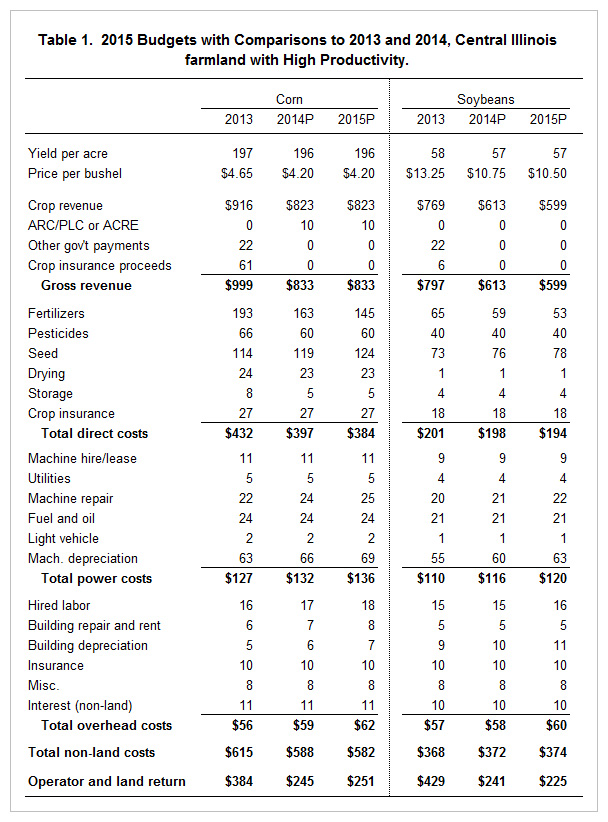 Crop yields are identical between 2014 and 2015 projections: 196 bushels per acre for corn and 57 bushels per acre for soybeans. Both the 2014 and 2015 projected yields are near trend levels. Weather in 2014 so far suggests that yields may be above trend, potentially leading to higher yields than those shown in the 2014 budgets. An increase in 2014 yields; however, may be offset by lower prices.

The 2015 soybean price is $10.50 per bushel, $.25 per bushel lower than the 2014 price of $10.75 per bushel. The lower price for 2015 is based on the assumption of increased supply of soybeans, leading to a continued movement back toward the historical soybean-to-corn price relationship. 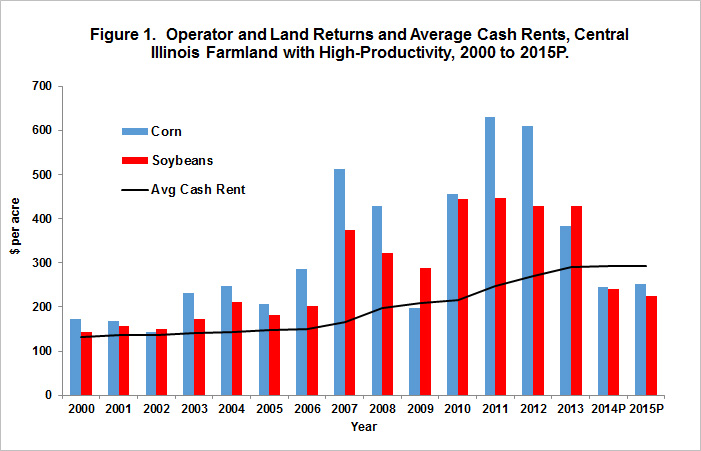 If return projections hold, average cash rents will be above operator and land returns for both 2014 and 2015 (see Figure 1). This would indicate farmer would suffer losses in both years. Higher returns could occur in either 2014 or 2015 if prices or yields are higher than those in the projections shown in Table 1.

These projected losses have implications for the setting cash rents for the 2015 crop year. Many of these rental rates will be set during the late summer and early fall. At this point, returns projections suggest that cash rents at or above average levels need to be set lower for 2015, as current average levels will result in farmer losses. This would result in two years with operator and land returns below average cash rents (see Figure 1). Cash rents rose from 2006 through 2013. Just as cash rents rose in recent years as a result of increased in operator and land returns, now cash rents should decrease as a result of lower return projections.