Revenues and costs for the 2013 cropping year have now been finalized and are reported in the publication entitled “Revenues and Costs for Corn, Soybeans, Wheat, and Double-Crop Soybeans” available in the management section of farmdoc (see here). Overall, costs increased in 2013 from 2012 levels (farmdoc daily June 3, 2014) and returns were lower in 2013 than in 2012. Projections are for much lower returns in 2014. The “Revenue and Costs” publication has revised measures of returns, as described in this article’s first section. Then, perspective is given on potential changes to 2014 returns projections resulting from information contained in USDA’s Acreage and Grain Stocks report released on June 30th. 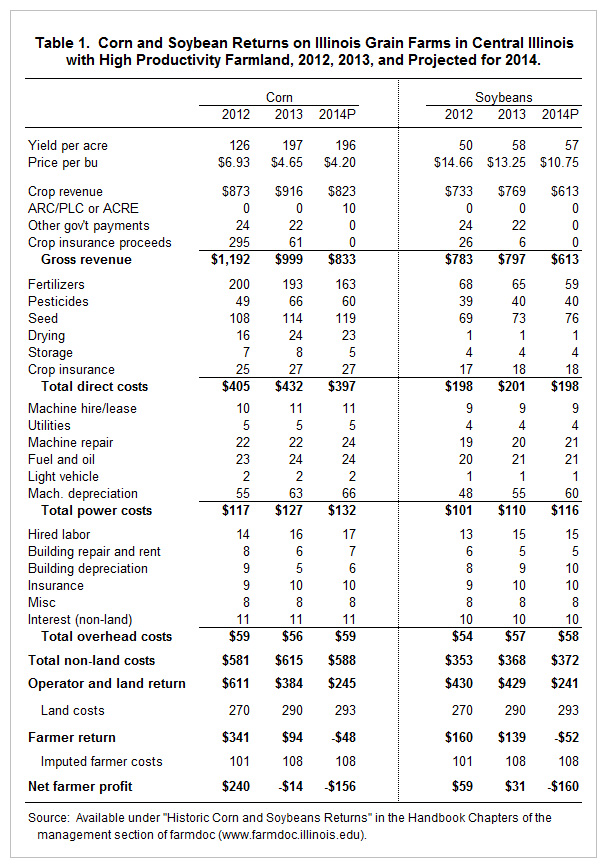 As can be seen in Table 1, three measures of returns are reported: operator and land return, farmer return, and net farmer profit. Operator and land return equals revenue minus non-land costs and where included in previous “Revenue and Costs” publications. Farmer returns and net farmer profits were not reported in previous publications.

As before, operator and farm return represents the return remaining to pay for farmland and to provide a return for the farmer. Division between land owner and farmer is easily illustrated for a cash rent situation. Take an operator and land return of $384 per acre and a cash rent of $290 per acre, as occurred for corn in 2013 (see Table 1). In this case, the land owner is compensated $290 per acre (the cash rent) for use of the farmland while the farmer is compensated $94 per acre ($384 operator and land return minus $290 of cash rent).

This farmer compensation is called the “farmer return”, and equals operator and land return minus land costs. In Table 1, land costs equal the average cash rent paid by farmers to land owners. This data is obtained from the Nationally Agricultural Statistical Service. Other means of controlling farmland, such as owning farmland or share-renting farmland, would have different costs than average cash rents. In the publication, farmer return represents the return to cash rent farmland, given that farmland is rented at the average level. Obviously, situations where cash rents are higher than the average level will result in lower farmer returns, and vice versa.

From farmer return is subtracted imputed farmer costs to result in net farmer profit. The imputed charges are for the farmer’s equity capital and unpaid labor used in the operation. For example, farmers have equity capital invested in the operation. Interest for this equity capital is included at the current average interest rate on farm debt. Similarly, operators’ labor is valued at the going charge for farm employees. Over time, a farmer needs to cover these imputed costs to provide compensation for capital and time invested in the farming operation.

Net farmer profit then equals farmer return minus imputed farmer costs. Over time, net farmer profits must be positive for the farmer to generate positive return for use of his or her resources. If net farmer profit is negative, a farmer could generate a higher return by not farming and investing equity capital in interest-bearing assets whose rate or return equals the average rate on farm debt, and taking an off-farm job generating an hourly wage equal to that of farm employees.

Farmer returns and net farmer profit are distinctly different measures of returns. Farmer return is close to an income statement measure of profitability given that farmland is cash rented. Non-land costs and land costs measured by cash rent represent the financial costs of operating and renting farmland. Net farmer profit is lower than farmer return because opportunity costs for equity capital are subtracted. This points out that having a positive farmer return does not imply that a farmer is generating a fair rate of return to capital and labor invested in the farming operation.

Lower projected prices will lower income projections. Take for example, a $4.00 corn price, $.20 per bushel lower than the $4.20 price used in Table 1. In this case, farmer return would equal -$87 per acre, $39 per acre lower than the -$48 projection at $4.20 corn price. Higher yields would increase return. To have a farmer return equal to $0 per acre, yield would have to be 217 bushels per acre at a $4.00 per bushel corn price

Final costs estimates for 2013 have been released on farmdoc, with a newly designed set or return measures. Returns in 2013 were lower than 2012. Farmer returns in 2014 are projected to be negative in 2014, the first time negative returns occurred in the 2000s. The June 30th reports suggest lower prices, which did not improve the return outlook. Negative returns became a higher probability after the June 30th reports.

Projections for 2014 will be updated as more information is revealed on price and yield levels.