The USDA’s August Crop Production report forecast the 2014 U.S. average corn yield at 167.4 bushels per acre. That exceeds the previous record yield of 164.7 bushels in 2009 and is 7.4 bushels above our calculation of the 2014 (unconditional) trend yield based on actual yields from 1960 through 2013. The forecast was smaller than expected, but this seemingly bullish news was shrugged off by the market. Comments by traders and market analysts indicate there is a widespread expectation that the forecast will increase in subsequent Crop Production reports. This would explain the weak reaction of market prices to the release of the August report.

There is an old market saying that “big crops get bigger” and this appears to be the basis for the expectation that USDA corn yield forecasts will increase in subsequent Crop Production reports. That is, in years when the final yield estimate is well above trend, the USDA forecast of the average yield tends to increase from August forward. Recent research by Isengildina, Irwin and Good documents this tendency in USDA corn and soybean forecasts. However, these same authors argue that the shortcoming of this type of analysis is that it is backward-looking. Specifically, the analysis starts by identifying years when the final yield estimate (typically January) is well above an in-sample calculation of trend and then traces the pattern of yield forecasts from August through the final estimate in January after harvest. That analysis can be more aptly identified as answering the question “did big crops get bigger.” Isengildina, Irwin, and Good go on to analyze whether crops that are expected to be big actually get bigger, or “do big crops get bigger.” Specifically, they identify years when the August USDA forecast is large relative to an out-of-sample trend yield estimate and then test whether forecast changes in following USDA Crop Production reports (September, October, November, and January) can be predicted based on the trend-deviation of the August forecast. Very little evidence for either corn or soybeans is found that “big crops get bigger” (or “small crops get smaller”) based on this forward-looking analysis and the authors conclude that, “…this bias may appear obvious to market analysts in hindsight but it is difficult to anticipate.”

The purpose of this article is to update and extend the analysis of patterns in USDA forecasts of U.S. corn yield in big crop years. We first update the sample used by Isengildina, Irwin, and Good through 2013 and then determine whether the additional data change their results. Next, we extend the analysis by limiting our focus only to years with large expected positive deviations from trend in August. In addition, we compare summer weather in 2014 to previous years identified as having a similarly large expected trend deviation and look for other statistical clues that might be helpful in projecting future changes to USDA corn yield forecasts. The analysis should provide an objective basis for forming expectations about changes in yield forecasts this year based on what is known in August.

We begin by calculating the deviation from August USDA corn yield forecasts from the out-of sample trend yield for each year over 1970-2013 using the same procedure as Isengildina, Irwin, and Good. Out-of sample trend yield is calculated based on actual U.S. average yield (January estimate) from 1960 through the year prior to the current year. For example, the 1970 trend yield is estimated based on 1960-1969, the 1971 trend yield is based on 1960-1970, and so on. The magnitude of deviations can be calculated as bushels or as percentages. We then compute for each year the change in the USDA corn yield forecast from August through the January estimate (this “final” estimate was actually released in December in the early part of the period). The changes can also be computed as bushels or percentages. With an R2 of zero, there is a total lack of relationship between the two variables in bushel terms (Figure 1). A similar lack of correlation is found if the analysis is repeated in percentages. 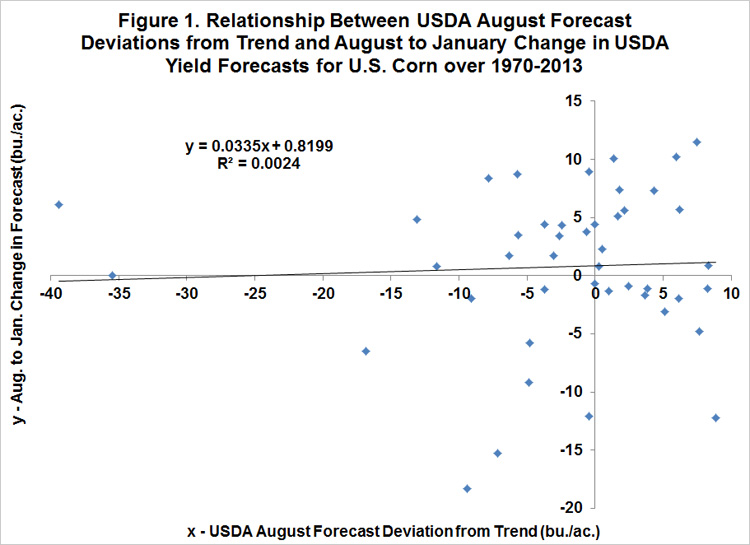 Clearly, adding recent years to the sample does not alter the findings of Isengildina, Irwin, and Good that the deviation of the August USDA corn yield forecast from trend does not predict subsequent changes in USDA corn yield forecasts. However, there are some notable outliers (1988, 2012) that could influence the results and a significant relationship in years with large positive trend deviations could be masked by the large overall variability in the sample. So, we next identify the 10 years over 1970-2013 when the August USDA yield forecast had the largest positive deviations from the calculation of out-of sample trend yield for that year. In this instance, the same 10 years are identified as having the largest positive deviations whether the deviation is denominated in bushels or percentages, although the rank ordering of the years varies for the two calculations.

The relevant yield data for the identified 10 years of large August forecast trend deviations are presented in Table 1. That data consist of the magnitude of the deviation of the USDA August corn yield forecast from out-of-sample trend yield, the monthly USDA corn yield forecasts, the January USDA corn yield estimate, and a calculation of the monthly and total change in the USDA yield forecasts through the forecast cycle for each year. The deviations of the August yield forecast from trend yield ranged from 4.4 bushels to 8.9 bushels and averaged 6.9 bushels, close to the 2014 deviation of 7.4 bushels (167.4 – 160.0). But, contrary to the expectation that big crops get bigger, the January yield estimate in those 10 years was above the August forecast in only five years. The positive differences (rising forecasts) ranged from 0.9 to 11.5 bushels and averaged 7.1 bushels. The differences in the five years when the January estimate was below the August forecast ranged from -1.1 to -12.2 bushels and averaged -4.6 bushels. So, there are years with large expected positive deviations from trend associated with large subsequent upward revisions in USDA corn yield forecasts (e.g., 1979, 1994, 2004), but there are just as many years with large expected positive trend deviations and subsequent large downward revisions in yield forecasts (e.g., 2000, 2006, 2010). This has important implications for interpreting the USDA’s August 2014 forecast of 167.4 bushels. As noted above, the out-of-sample trend deviation for this forecast is 7.4 bushels, near the middle of the range of large positive trend deviations. Our analysis indicates there is an equal chance that subsequent revisions to this forecast will be upward or downward. The widely-held view that USDA corn yield forecasts will rise in the future is equivalent to arguing that 2014 is the same type of year as a 1979, 1994, or 2004, instead of a 2000, 2006, or 2010. This may turn out to be true, but the historical record indicates such statements are not justified based simply on the size of the August 2014 forecast relative to trend. 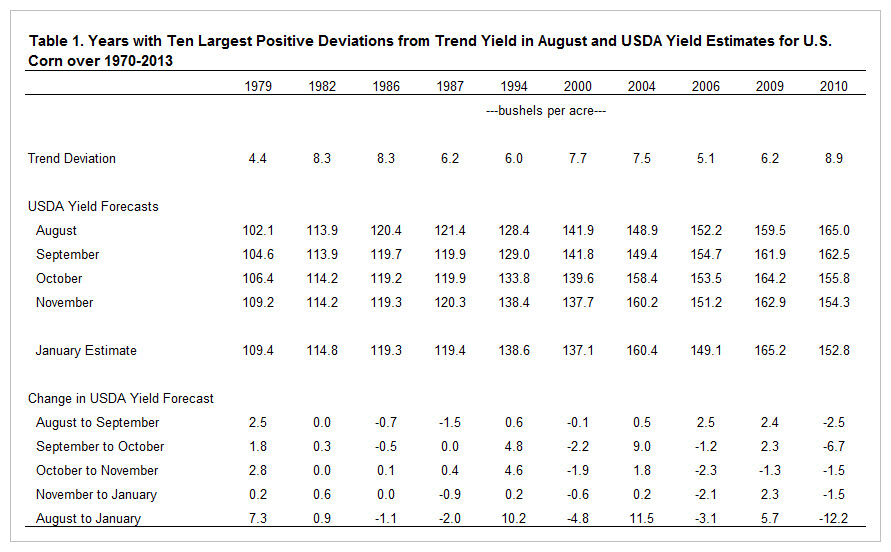 While the August forecast deviation from trend is not helpful in predicting USDA yield forecast changes, this does not eliminate the possibility that conditioning on other information might allow one to better characterize which type of year 2014 represents. One obvious source of conditioning information is summer weather. In a recent article (farmdoc daily, July 9, 2014), we examined weather and corn yields in years of large positive trend deviations. The analysis showed that June weather conditions in Illinois, Indiana, and Iowa in 2014 were not consistent with previous years of very high U.S. average corn yields. Specifically, June was wetter and warmer than the previous six years with the highest positive yield deviation from trend. Not surprisingly, those six years included the five years identified here when the August USDA corn yield forecast was well above out-of-sample trend and also increased by January (1972 was included in the earlier analysis, but is not here because the earlier analysis was based on in-sample trend estimates).

Table 2 updates our previous analysis by adding July weather in Illinois, Indiana, and Iowa this year. We compare June and July 2014 weather to the five high-yielding years included in the current analysis. June this year was wetter and warmer and July was drier and cooler than those previous five years. The dryness in July this year was particularly notable, as it fell 1.5 inches short of the average in other high yielding years when the USDA yield forecast increased by a notable amount. It remains to be seen whether this precipitation deficit was offset by cool July temperatures. August weather in Illinois, Indiana, and Iowa in the five previous very high yielding years was consistently wetter and cooler than the long-term average. Average precipitation and temperatures for August this year are obviously not yet known. The first half of the month was cooler than average, with temperatures moving well above average during the third week of the month. Temperatures are expected to moderate as the month ends, likely resulting in slightly below average temperatures for the month. Precipitation in August has been moderately above normal and is expected to continue this way. Overall, the picture that emerges from this examination of key weather variables is that 2014 does not uniformly match weather patterns in previous high-yielding years when USDA yield forecasts increased. Compared to other high-yielding years, June precipitation this year was substantially higher, July precipitation was substantially lower, and it appears that August temperature will be higher as well. The bottom-line is that the summer weather pattern in 2014 is not a close analog to summer weather in other high-yielding years (e.g., 1979, 1994, or 2004) when USDA corn yield estimates rose substantially after August. The fairly unique weather in the summer of 2014 does not appear to point towards either upward or downward changes in the USDA corn yield forecast. 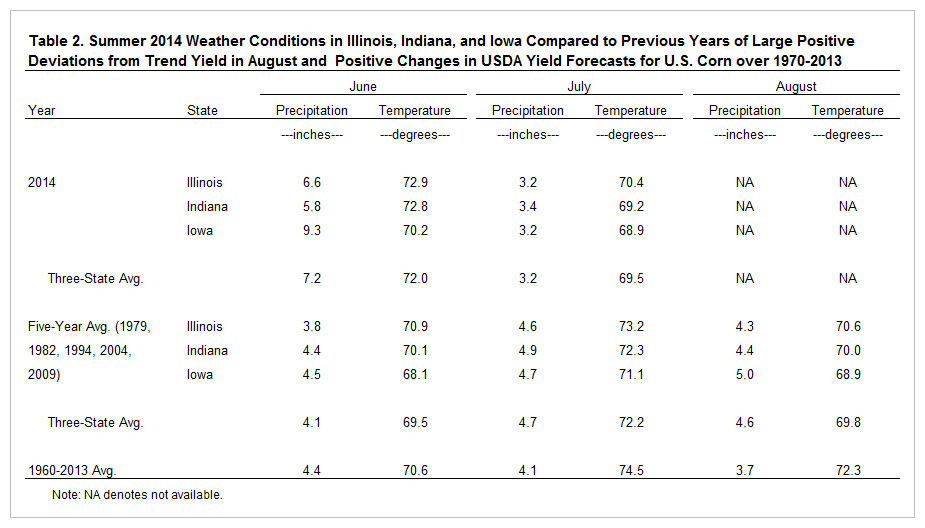 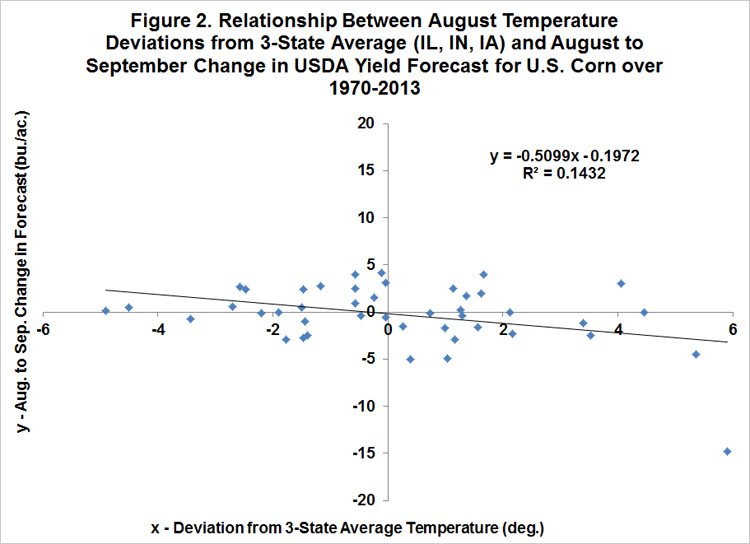 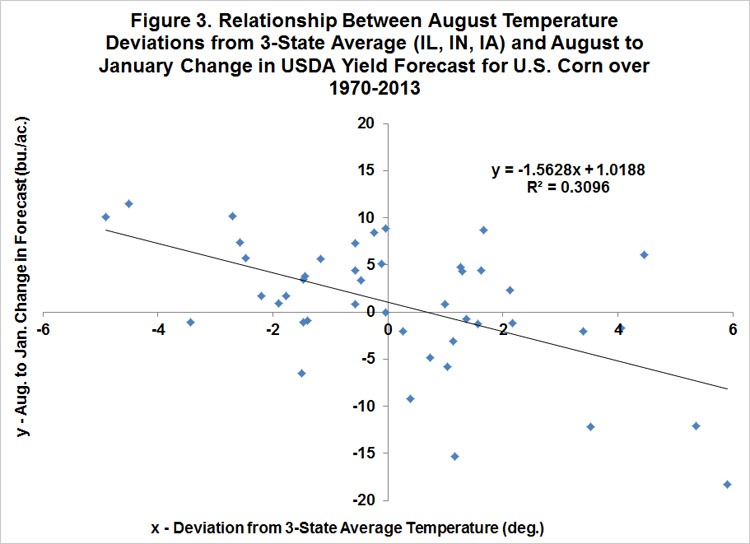 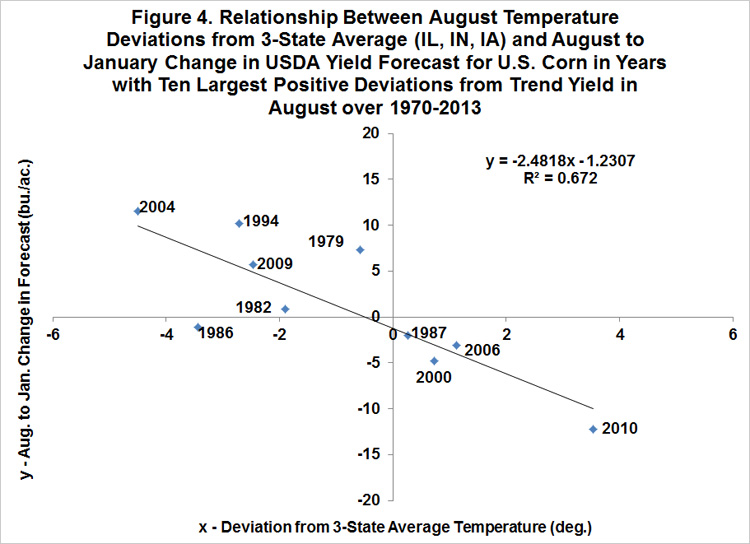 The final USDA estimate of the 2014 U.S. corn yield will have obvious implications for corn prices for an extended period. History suggests that the September forecast will give some indication of the direction of change in yield forecasts from August to January, but will not provide much insight on the possible magnitude of change. Many analysts are on record anticipating that the final yield estimate will be well above the August forecast of 167.4 bushels and it appears that the corn market is trading a much higher yield. Much of the expected yield increase is based on the concept that “big crops get bigger,” with support also coming from relatively high crop condition ratings late in the season. The analysis in this article, however, reveals that 1) historically, not all big crops get bigger, 2) weather conditions through July were not completely consistent with an average corn yield that has one of the highest positive deviations from trend, and 3) average August temperatures this year may not be consistent with a large increase in the USDA yield forecast from August to January. These results do not imply that the U.S. average corn yield this year will not be large and will not increase, only that such outcomes would be highly unique given the nature of the growing season.

Isengildina, O, S.H. Irwin, and D.L. Good. "Do Big Crops Get Bigger and Small Crops Get Smaller? Further Evidence on Smoothing in U.S. Department of Agriculture Forecasts." Journal of Agricultural and Applied Economics 45(2013):95-107.