This article provides payment level indicators for ARC-CO and PLC payments based on the October 10, 2014 WASDE U.S. yield and U.S. price projections for barley, corn, oats, long grain rice, medium (and short) grain rice, sorghum, soybeans, and wheat. This article updates previous indicators given on August 13, 2014 and September 18, 2014 based on the August and September WASDE (World Agricultural Supply and Demand Estimates). Estimated payments are referred to as indicator estimates because they use U.S. yield not the county yield used by ARC-CO or farm payment yield used by PLC. The estimates are not payments an individual FSA farm will receive. Nevertheless, the indicator estimates using U.S. yields should help frame perspectives and questions for FSA farm owners and operators regarding program choices.

ARC-CO makes a payment if county revenue is below 86% of the county’s benchmark revenue. Benchmark revenue is the product obtained by multiplying 5-year Olympic moving averages (removes high and low values) of county yield and U.S. crop year price. ARC-CO payments are capped at 10% of the benchmark revenue. PLC makes payments when U.S. crop year average price is less than the crop’s reference price. Congress specified the reference price in the 2014 farm bill. For an extended discussion of various topics related to these two programs, see the August 13, 2014 farmdoc daily article. Topics include the third program option, ARC-IC (ARC-individual farm). The formulas used to calculate payments by ARC-CO and PLC are presented in an Appendix in the August 13, 2014 article.

Table 1 contains the October 2014 WASDE price projections for the 2014 crop year. The mid-price projections indicate payments by ARC-CO for corn, sorghum, and wheat and by PLC for corn, long grain rice, and sorghum (see Figure 1). Indicated payment is highest for corn from ARC-CO at $79 per acre. Next highest is $78 per acre by PLC for long grain rice. Remember, actual payments depend upon county yield for ARC-CO and FSA payment yield for PLC, and payment is made on only 85% of base acres (65% for ARC-IC). 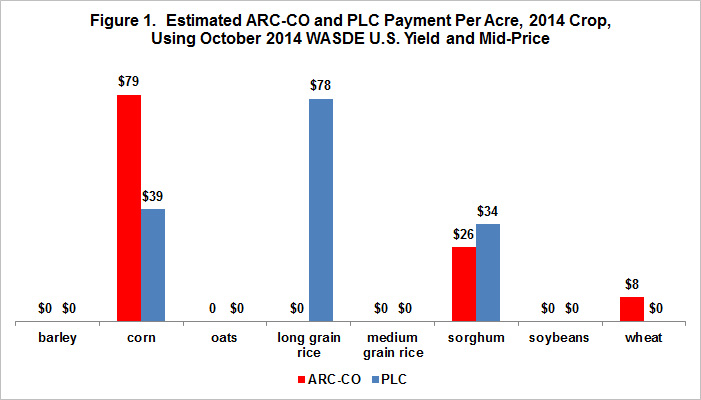 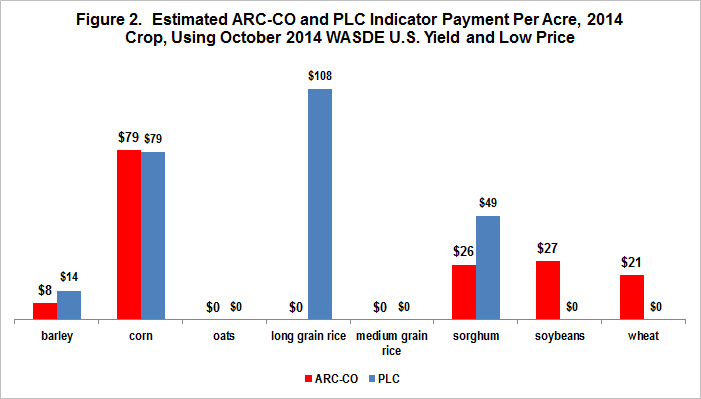 Since ARC-CO and PLC make the same payment at a crop year average price of $3.10 per bushel for corn, the higher paying program at prices around $3.10 for corn will depend on the relationship among the yields that affect payment: farm program yield for PLC, and actual and benchmark county yield for ARC-CO. As crop year price increases above (decreases below) $3.10 for corn, the higher paying program will tend toward ARC-CO (PLC), especially as price moves further from $3.10.

For sorghum the difference between indicated payments by ARC-CO and PLC increased from the mid-price to low price calculation (Figure 1 vs. Figure 2). The reason is that ARC-CO payment was at its cap or maximum value of $26 per acre at the projected mid-price. In contrast, PLC has a much higher cap, which is determined by the difference between the reference price and loan rate. Again, remember, actual payments depend upon county yield for ARC-CO and FSA farm payment yield for PLC, and payment is made on only 85% of base acres (65% for ARC-IC).

Corn – ARC-CO, long grain rice – PLC, and sorghum – both programs had payments indicated at the high October WASDE price (see Figure 3). Because payment is indicated at the high price, likelihood of payment for these crop-program combinations is higher. However, payment is not 100% certain as U.S. crop year price can end up higher and, for ARC-CO, high county yields can offset low prices. 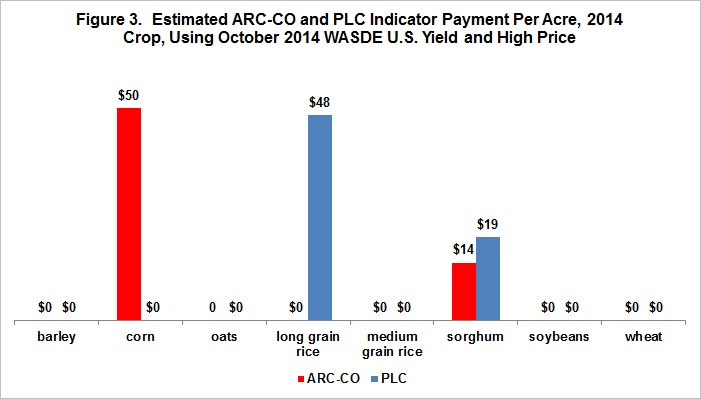 The sizeable difference in estimated indicator payment at the low and high October WASDE price projections needs to be underscored. The current range on U.S. crop year price projections is such that both high payments and no payments may occur. To emphasize this point, Figure 4 presents the largest difference between the October WASDE mid-price forecast and final crop year price for corn, soybeans, and wheat over the 1979 through 2012 crop years. Largest difference is $1.00 for corn, $1.75 for soybeans, and $0.38 for wheat. Wheat is smallest because its crop year begins June 1, which is earlier than the September 1 start for the corn and soybean crop year. Simply put, it is too early in the 2014 crop year to talk with much certainty about the size of payments. It is reasonable to say that 2014 crop year payments may occur, that they may be large if the right combination of price and yield materialize, that they will likely vary by crop, and that they will likely vary by program for a given crop. 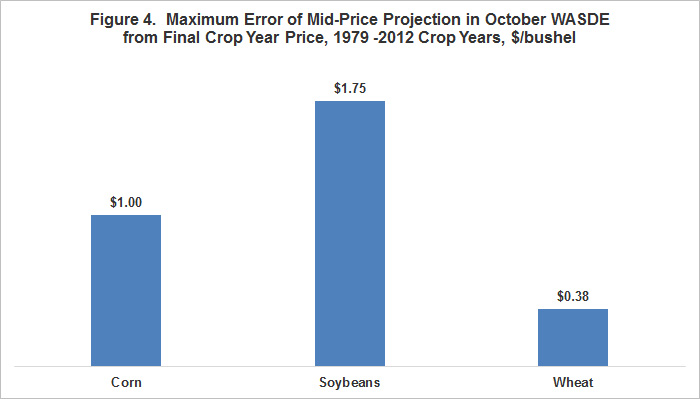 In policy it is important to think at both the micro (individual farm or acre) level and macro (national) level. However, given the uncertainty surrounding 2014 crop year price (and to some degree yield) projections and the critical unknown issue of which program farms will choose, we think it is too early to provide estimates of total farm program payments. However, simple sensitivity assessments suggest that total payments could be both smaller and larger than the $4 billion plus in direct payments that farmers gave up in the 2014 farm bill. Also corn is likely to account for the bulk of payments based on current information because of its large program acres, its current price projection, and the fact that the 2014 mid-price estimate is 46% below the average price for the 2010 through 2012 crop years.