Anhydrous ammonia prices averaged $717 per ton in Illinois according to the October 2nd edition of the Illinois Production Cost Report (see here). The 2014 price was higher than the 2013 price of $678 per ton. Changes in nitrogen prices between now and spring could influence plantings of corn versus soybeans in 2015.

The September 2014 version of the 2015 Crop Budgets (see here) suggests that soybeans will be more profitable than corn in all regions of Illinois. This profitability outlook is unusual. Usually, corn is projected to be more profitable than soybeans. Commodity prices used in the budgets are $3.80 per bushel for corn and $9.75 per bushel for soybeans. Relative changes in these prices will change the relative profits of corn versus soybeans.

Historical nitrogen prices provide a gauge of potential for price changes into spring. Table 1 shows monthly anhydrous ammonia prices for Illinois as reported by the Agricultural Marketing Service. For each year, this table begins with a price in September and ends with a price in June. For example, the first row of the report gives prices for September through December of 2008 and January through June of 2009. The 2008 fall prices are assumed to be related to 2009 crop production. 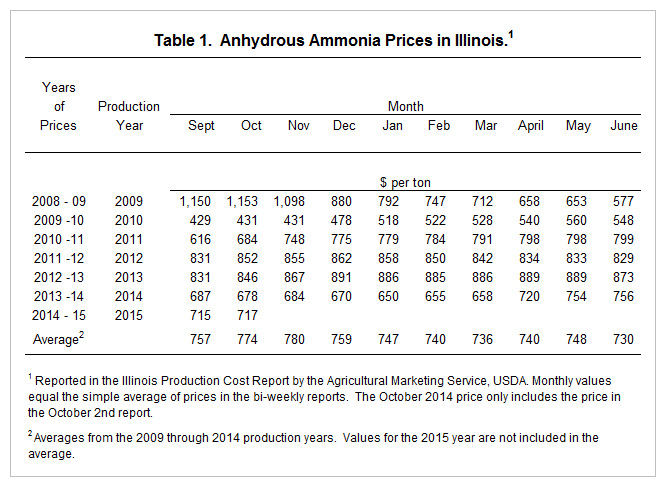 From 2009 to 2014, the October anhydrous price of $774 per ton was $34 per ton higher than the April average of $740 per ton (see Table 1). However, within-year price changes can be large and of varying direction. To summarize changes between October and April by production year: