Corn returns in 2014 likely will be negative on many farms, with losses near $100 per acre on cash rent farmland in northern Illinois (farmdoc daily, October 24, 2014). Projections indicate that soybeans will be more profitable than corn in 2014. Having a higher return for soybeans is unusual and may have implications for 2015 planting decisions. 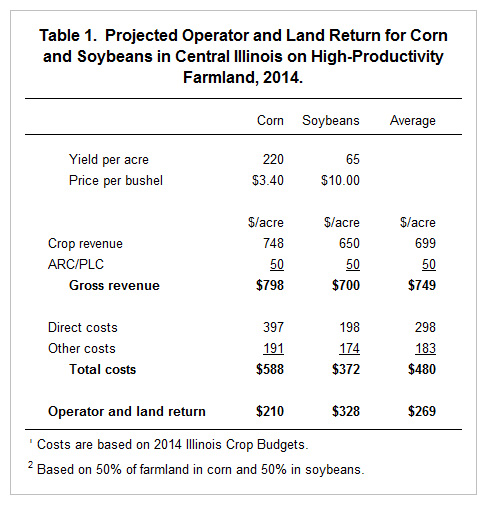 Projections use a $3.40 per bushel corn price and a $10.00 per bushel soybean price. Both prices are at the midpoint of the range given in World Agricultural Supply and Demand Estimates (WASDE) released by the U.S. Department of Agriculture in October. These WASDE prices currently are above cash bids farmers are receiving for crop sold directly out of the field. Also included in revenue are projected ARC/PLC payments of $50 per acre.

Costs shown in Table 1 come from 2014 Illinois Crop Budgets. Total costs equal $588 per acre for corn and $372 per acre for soybeans.

Differences in prices, yields, and costs impact relative returns between corn and soybeans. In Table 1, corn will have the same return as soybeans if each of the factors changed independent of the others:

The sizes of the above changes illustrate that soybeans will be more profitable than corn in most situations.

The 2014 projections may hold implications for shifts in acres in 2015. Similar to 2014 returns, return projections for 2015 suggest that soybeans will be more profitable than corn. Central Illinois has a larger comparative advantage in corn production over soybean production than many other areas of the United States. Hence, relative return differences between corn and soybeans likely are larger outside of central Illinois. Hence, economic incentives to switch acres outside of Illinois likely will be larger than those for central Illinois.

Schnitkey, G. "Cash Deficits Projected for Corn in 2014 and 2015." farmdoc daily (4):206, Department of Agricultural and Consumer Economics, University of Illinois at Urbana-Champaign, October 24, 2014.