The 17 October 2014 farmdoc daily article reviewed the average family living (non-farm) expenses in Figure 1 and on a ‘per operator acre’ basis in Figure 2 for a ten year period. Today’s article will review some of that same data, but from a different perspective. 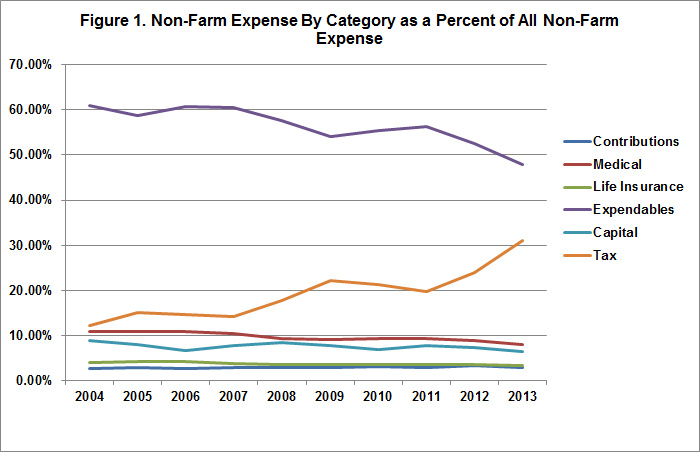 Figure 2 depicts the average non-farm expenses as a percentage of average net farm income plus any non-farm income as one attempts to roughly identify sources of income and the eventual use of that income for the farm businesses in the data. A challenge with this data lies in the fact that some of the metrics are cash and some are accrual making a reconciliation difficult. Average non-farm income increased steadily (by approximately $10,000) over the ten year period leaving average net farm income as the driver of changes of the two combined. The three high years of 2005, 2009, and 2013 are easily seen as are the large swings. Interestingly, the data show that three of the five highest years (2004, 2005, and 2006) are years where net farm incomes were generally lower while the two highest years (2009 and 2013) are years where net farm income were very high. 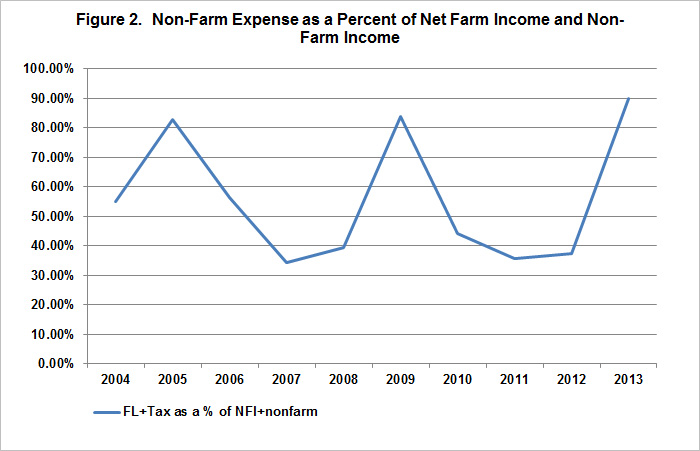 Relative to other non-farm expenses, family living expendables exhibit a down trend while income and social security taxes exhibit an up trend over the ten year period. Future years will reveal if these two trends continue. The remaining four expense categories exhibit a more steady pattern indicating that they expand and contract and income (farm and non-farm) rise and fall.

Zwilling, B., B. Krapf, and D. Raab. "With Tightening Margins, Keep in Mind Family Living." farmdoc daily (4):201, Department of Agricultural and Consumer Economics, University of Illinois at Urbana-Champaign, October 17, 2014.