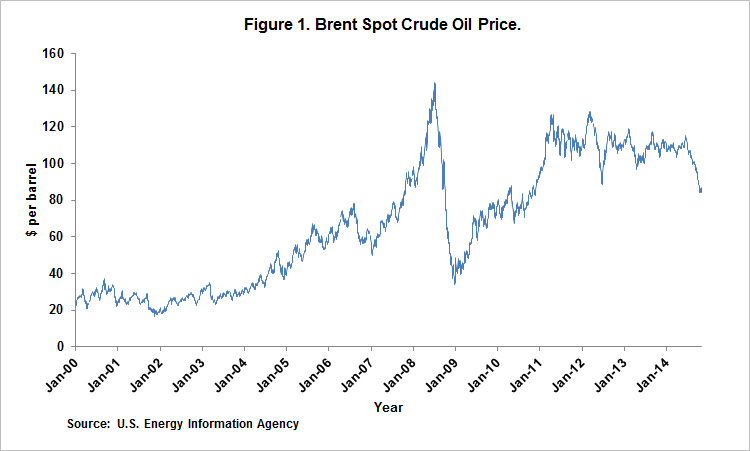 The spot price of Brent crude oil fell below $100 per barrel on September 5, 2014, the first time Brent Crude has been below since June 2013. On November 3rd, the spot price of Brent Crude was $84.90. A number of factors have contributed to this decline including increases in North American oil production, hesitancy by Saudi Arabia to cut its own oil production, drops in Asian demand for oil due to slower growing economies, and concerns about demand for oil in Europe due to the potential of economic recessions.

Currently, the outlook for oil prices continues to be below $100 per barrel for 2015. Prices on Intercontinental Exchange (ICE) future contracts for Brent crude oil are in the low $80 per barrel for all contracts with expirations in 2015. Of course, any number of events could change that outlook. Crude oil prices can exhibit sharp swings, as is illustrated by the prices shown in Figure 1.

Fuel and lube costs in 2013 were $24 per acre for growing corn on high-productivity farmland in central Illinois. Fuel and lube accounted for 4% of the $615 of non-land costs associated with corn production. Current crude oil prices are roughly at the same level as occurred in 2010. In 2010, fuel costs for corn equaled $17 per acre. If 2015 fuel costs equal 2010 costs, an $8 per acre reduction will occur in fuel and lube costs. Overall an $8 reduction in fuel costs would reduce non-land costs by 1.3%.

Fuel and lube costs for soybean in 2013 averaged $21 on high-productivity farmland in central Illinois. In 2010, fuel and lube costs equaled $15 per acre. Using 2010 as a benchmark, fuel price decreases of current magnitudes could equal a $6 per acre decrease or 1.6% of the $368 non-land costs of producing soybeans in 2013. 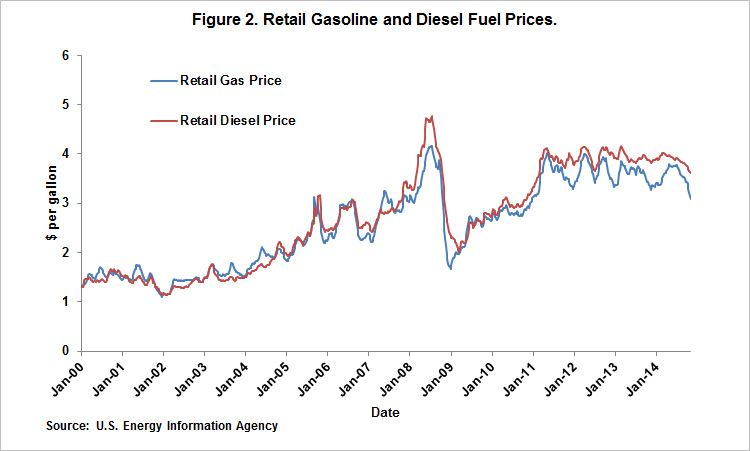 Impact on Other Costs

Declines in fuel costs could lower other production costs, such as fertilizer and seed. If there is an impact, these costs likely have a lagged relationship to fuel costs. As a result, crude oil price decreases likely will be felt not in 2015, but in 2016 and years thereafter if prices decreases persist.

From the standpoint of costs, fuel price reductions will reduce non-land costs of producing corn and soybeans. Cost decreases, however, will be modest compared to total production costs.

A countervailing impact of lower costs may be the impact that lower crude oil prices have on ethanol prices. Lowering crude oil prices could reduce the price of ethanol, which could lower commodity prices. Whether these impacts happen will be traced out over time.