The prices used in this study are price indexes for all crop prices received by farmers and 6 categories of inputs – ag services and rents, chemicals, fertilizer, fuels, machinery, and seed. The data for ag services and rents does not begin until 1971. We want to examine changes up to 10 years in length. Hence, our analysis cannot begin until 1981 due to the need for a 10 year window. It would be nice to have rent as a separate category, but such data does not begin until 1990. Since 1990, the price indexes for rent and ag services plus rent have a high but not perfect correlation and thus findings are similar but not the same for both input categories. The data ends with 2013, the last year with complete information. Source for the price data is the U.S. Department of Agriculture (USDA), National Agricultural Statistics Service (NASS) Quick Stats website.

Because general price inflation is likely to differentially impact the various price indexes and was a factor over the analysis period, we deflate all price indexes by the Gross Domestic Product (GDP) implicit price deflator. The GDP deflator is generally considered the best measure of general price inflation in a country’s economy. Source for this deflator is the Economic Report of the President.

To provide a broad perspective, average annual change in real price is calculated over the 1981-2013 period (Figure 1). This period begins at the end of the 1970 period of farm prosperity. Between 1981 and 2013, the real price index of all U.S. crops declined -0.3%/year. Also declining was the real price of chemicals (-0.3%/year) and ag services and rent (-0.2%/year). Real price of seed increased the most (+3.1%/year), which was not unexpected. Real price of fuels and machinery both increased +2.0%/year while real fertilizer price increased +1.0%/year. The diversity in long-term real price trends across farm inputs is the key message of Figure 1. 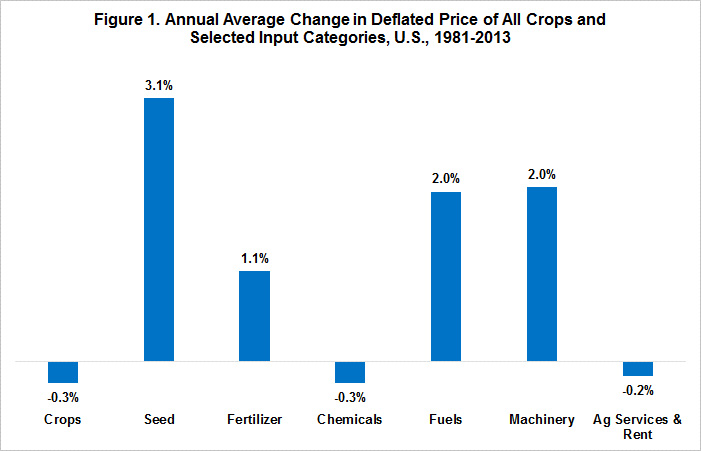 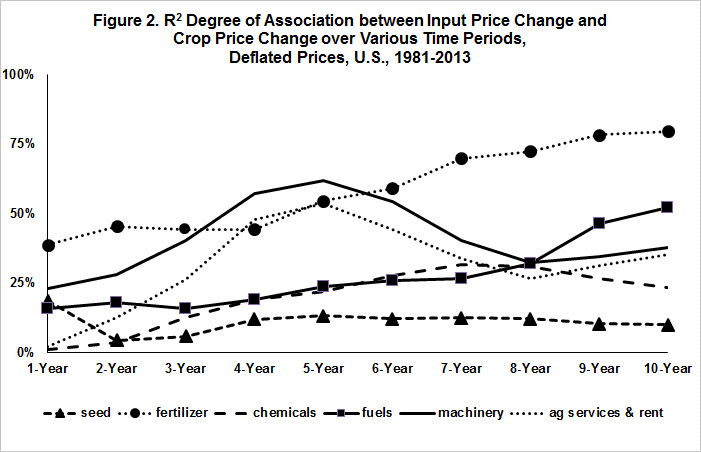 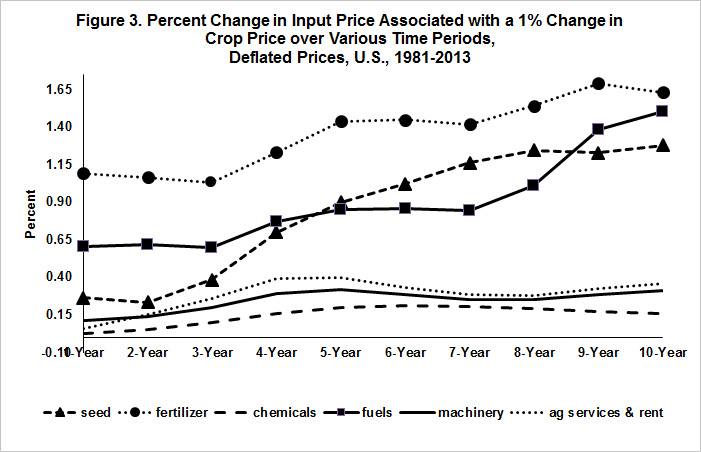 Both Figures 2 and 3 reveal an association that increases as the period of time lengthens. Figures 4 and 5 help draw out this observation. Figure 4 presents the slope coefficient for a length of time relative to the slope coefficient for year 10. In essence, Figure 4 depicts the percent of adjustment at year 10 that is achieved as of a shorter period of time. Figure 5 presents the average value of the slope ratios for all 6 inputs by time period. One reason for benchmarking the slope coefficients to their year 10 value is that there is no reason to believe that all inputs should have the same adjustment path to a 1% change in the real price of crops. This observation is consistent with the variation across inputs observed in Figures 2 and 3. A factor that helps explain some of the variation is the commonly-accepted argument that productivity increases have varied by input. The higher the increase in the productivity of an input, the higher the price farmers can pay for the input, given all other factors. Despite the observed variation in adjustment paths across the 6 inputs, it appears that the input price adjustment path is mostly completed by year 5. Moreover, Figure 5 suggests that, across all inputs, it appears that in general about one third of the adjustment occurs in year 1, with the remaining adjustment occurring throughout the next 4 years. 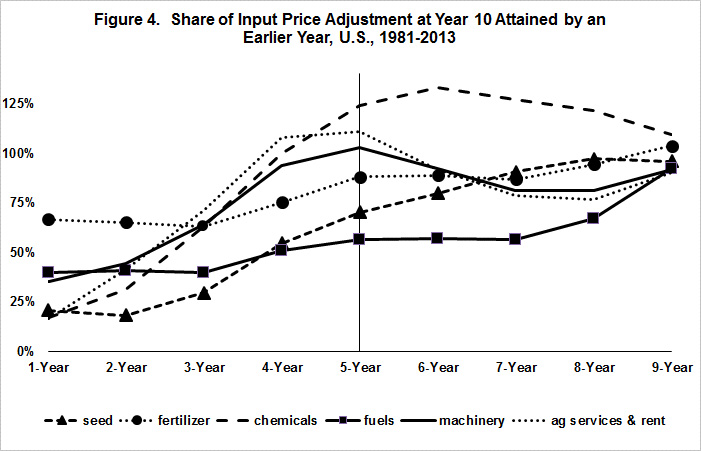 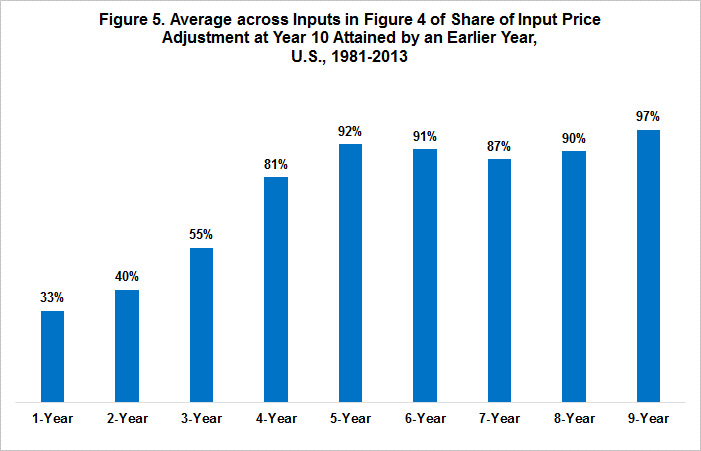