The 2014 Farm Bill gives landowners a choice between two alternatives for determining the allocation of base acres across program crops (see here for an overview of the three decisions). Land owners will either 1) retain current base acres or 2) reallocate base acres based on plantings to program crops from 2009 through 2012. For most Midwest situations, the allocation with the highest corn acres, thereby having fewer soybean acres, likely will be the alternative that maximizes expected program payments.

Each Farm Service Agency (FSA) farm has a current allocation of base acres in program crops. FSA sent this information to land owners and producers in a letter received in August 2014 (see Step 2 of the ARC/PLC decision steps). Summing up these acres gives total base acres on the FSA farm. As an example, suppose a farm has 75 acres in corn and 20 acres in soybeans, and 5 acres in wheat. This farm then has 100 total base acres (75 acre in corn plus 20 in soybeans plus 5 acre in wheat).

Several notes about the base acre allocation choice:

Impacts of this Decision

The 2014 Farm Bill is scheduled for the 2014 through 2018 crop years. In each of these years, Price Loss Coverage (PLC) and Agricultural Risk Coverage at the county level (ARC-CO) payments will be made by crop according to base acres. Suppose a farm has 60 base acres in corn. This farm will receive payments on 60 base acres if ARC-CO or PLC makes payments in 2014 through 2018. Plantings do not matter. There could be no corn planted in the year of payments and the farm would still receive payments on 60 base acres of corn. Therefore, this decision is determining the number of which PLC and ARC-CO payments will be received for the life of the 2014 Farm Bill.

Another program alternative for receiving commodity program payments is Agricultural Risk Coverage with Individual Coverage (ARC-IC). If the choice is made, the base acre reallocation decision will not impact payments from ARC-IC. Payments are made on total base acres not on the base acres in individual crops.

Tools for Determining Reallocated Base Acres

The University of Illinois has been involved in making two tools available for calculating base acre alternatives. One is available on the web at the Agricultural Policy Analysis System (APAS) website (click here). This site has a “Base Acre Reallocation Quick Calculator” tool that will directly calculate reallocated base acres.

Figure 1 shows an example of the section used for entering information from FSA for calculating the acre reallocation alternatives. This section has the same format as the August 2014 letter from FSA. Users of the spreadsheet enter current base acres. In the example in Figure 1, current base acres are 75 base acres in corn, 20 base acres in soybeans, and 5 acres in wheat. Users also enter planted, prevented planted, double crop, and subsequent acres for each year from 2008 through 2012. This information was provided by FSA in the August 2014 letter. In the example, 60 acres are planted in corn each year and 40 acres are planted in soybeans. 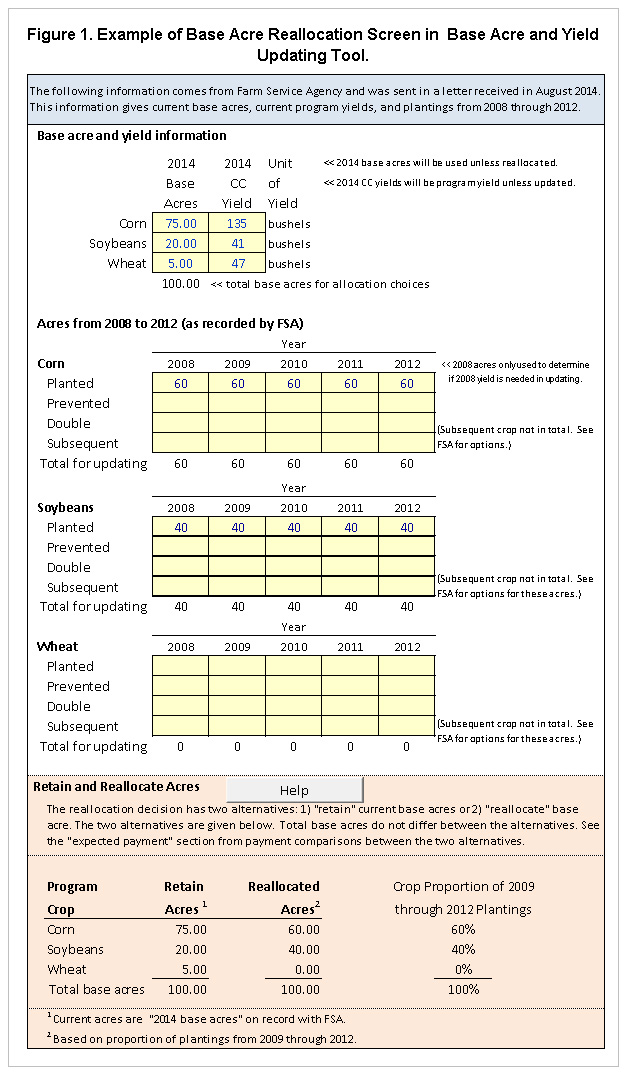 Given the input, the “Base Acre and Yield Updating” tool then states the two allocation alternatives (see bottom of the screen). For the example shown in Figure 1, the alternatives are:

Choosing Between the Alternatives

Many land owners will want to choose the allocation that has the highest expected payments. To aid in these comparisons, expected payments have been calculated and are available in the “sample farms” section of APAS and also are given in the Base Acre and Yield Updating spreadsheet.

These expected payments have been calculated for program crops in all major producing counties in the United States. Expected payments give an estimate of what the programs could average over the next five years. For example, an estimate of ARC-CO payments on corn in DeKalb County, Illinois using FAPRI prices is $41 per acre. If the years 204 through 2018 could be repeated many times, the average payment per base acre would average $41 per acres. Some years would be higher and some years would be lower.

Expected payments are given for three sets of prices: 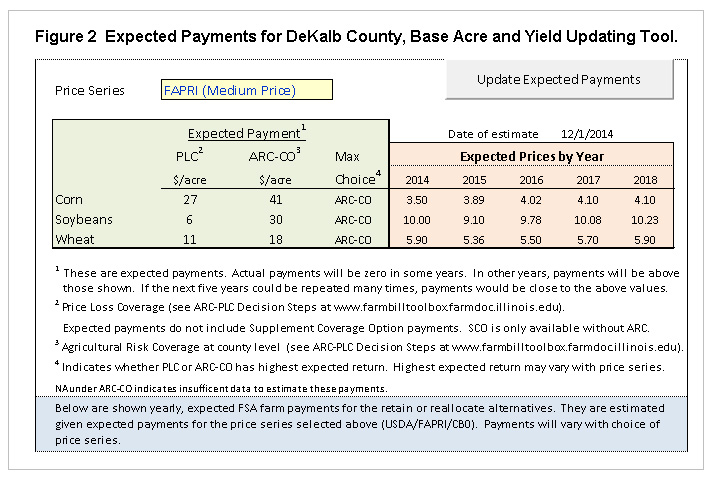 Several observations from these expected payments:

The Base Acre and Yield Updating spreadsheet also compares expected payments for the “retain” and “reallocate” alternatives. Figure 3 shows this information for the DeKalb county example with 100 base acres in the following two allocations: 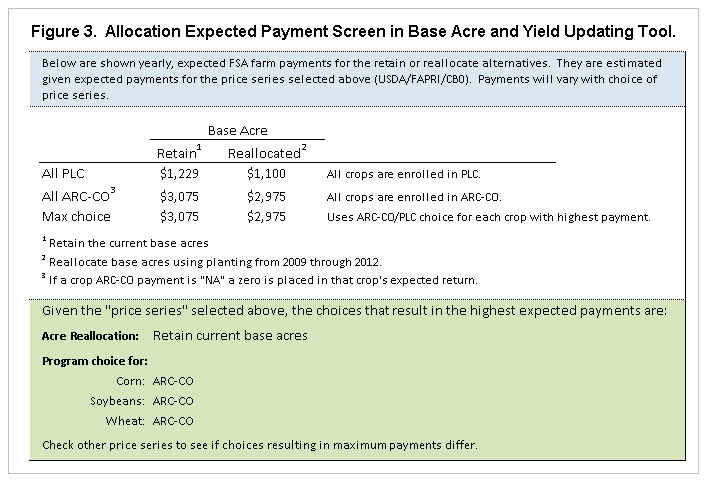 Obviously, we are projecting the future when calculating expected payments. Soybeans could pay more over the next five years than corn. However, expectations are that corn will pay more than soybeans.

Two alternatives exist for reallocating base acres. In the Midwest, the alternative with the most corn acres, and the fewest soybean acres, is expected to result in the highest payments levels. More detail on the 2014 Farm Bill decisions is available in the Farm Bill Toolbox on farmdoc.

Schnitkey, G. "Base Acre and Yield Updating Tool: A Release of Spreadsheet to Aid in Making Farm Bill Decisions." farmdoc daily (4):235, Department of Agricultural and Consumer Economics, University of Illinois at Urbana-Champaign, December 9, 2014.