Today’s article provides an update on Renewable Identification Numbers by looking at estimates for RIN carry-in and generation numbers for 2014 based on available data through October from EPA’s EMTS. There still exists a significant amount of uncertainty regarding actual mandate levels for 2014 in light of the EPA’s recent announcement that the finalization of rules for 2014 will be delayed into 2015. This article examines the range of 2015 RIN stock scenarios that could occur assuming the final mandate levels range somewhere between proposed and statutory levels for 2014. 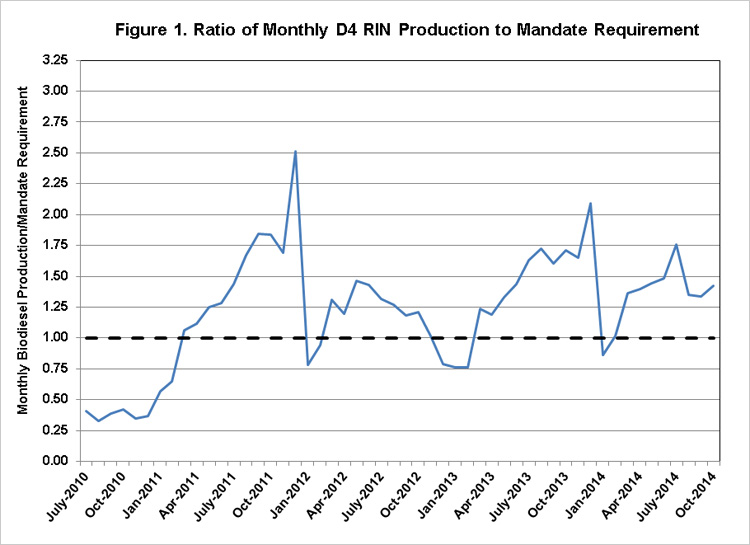 Generation of D5 advanced biofuel RINs increased throughout the early part of 2014 to 15 to 20 million gallons per month from April through July. However, generation of D5 RINs has since declined dramatically, averaging 5 million RIN gallons per month from August through October. Assuming another 5 million D5 RINs are generated in the months of November and December, total generation of D5 RINs for 2014 would be just over 135 million RIN gallons, providing additional RINs for use towards the undifferentiated advanced mandate component of 280 million gallons (2.2 billion total less 1.92 billion biodiesel). 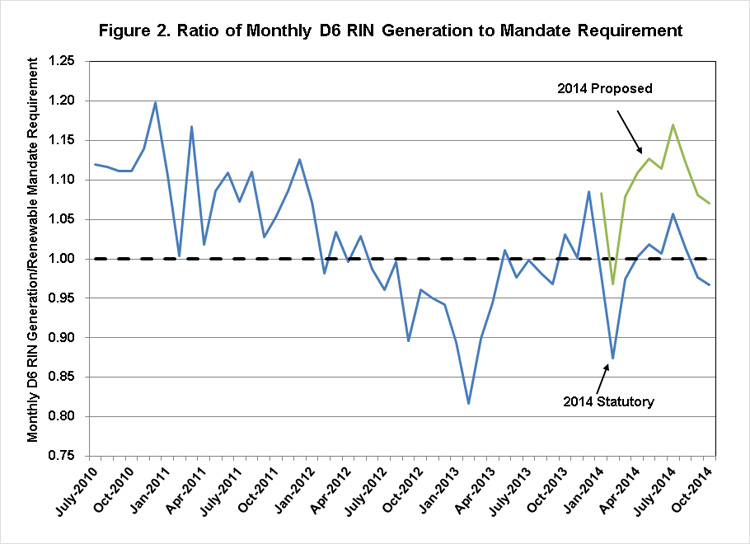 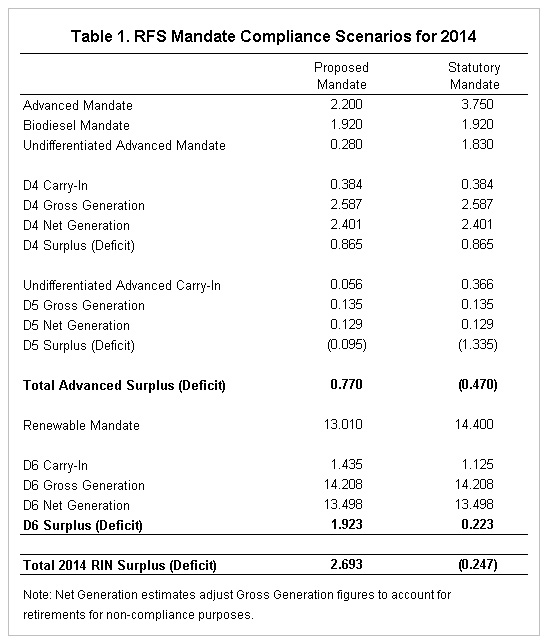 The first column in table 1 provides estimates for a compliance scenario in 2014 assuming the mandate levels are finalized at their proposed levels for 2014. Estimated carry-in plus net generation of D4 RINs in 2014 is estimated to be more than sufficient to cover the 1.92 billion RINs required for compliance with the biodiesel mandate, resulting in a surplus of D4 RINs totaling 865 million RIN gallons. Estimates of D5 carry-in plus net generation would fall just short of the required amount for the undifferentiated portion of the 2014 mandate at proposed levels, but the surplus of D4s would allow for a total advanced RIN surplus of 770 million RIN gallons.

Under proposed mandate levels, estimates of carry-in plus net generation of D6 RINs in 2014 would generate a surplus of 1.923 billion RIN gallons after compliance with the 13.01 billion gallon mandate. Combining the advanced and renewable categories would imply a total surplus for carry-in to 2015 of 2.693 billion RIN gallons.

The second column of table 1 provides estimates for a 2014 compliance scenario if the original statutory mandate levels are used in the final rule. This scenario does not impact the biodiesel component of the mandate. However, it does result in an estimated deficit of D5 RINs totaling 1.335 billion gallons, and a deficit of total advanced RINs (D4 and D5) of 470 million gallons.

Using data through October from EPA’s EMTS system, estimates can be obtained for total RIN generation in 2014 across all D code categories. Projecting average pace over the past 3 months for each category through the end of the year results in gross generation estimates of 2.587 billion D4, 135 million D5, and 14.208 billion D6 RINs. These estimates represent marginal increases from those in my mid-year RIN update for the D4 and D6 categories, and a reduction in the estimate for the D5 category.

Adjusting for retirements for non-compliance purposes and combining these with carry-in estimates provides projections useful for examining possible RFS mandate compliance scenarios in 2014. If the mandate levels in EPA’s proposed rulemaking for 2014 are upheld, the current pace of RIN generation suggests that a surplus of both advanced and renewable RINs will be available for carry-in to 2015. Examining a scenario at the original statutory mandate levels suggests a deficit of advanced RINs, a small surplus of D6 RINs, and an overall deficit to rollover into 2015.

These estimates suggest that the market’s expectation is for finalized mandate volumes to be below statutory levels, as net RIN generation in 2014 plus carry-in from 2013 are estimated to be insufficient to meet statutory mandate levels for 2014. Generation levels for both advanced (D4 and D5) and renewable (D6) RINs remains well above the pace needed to meet the mandate needs implied by EPA’s proposed levels. Thus, the market may expect some increase from proposed levels in the final rulemaking.