Landowners have the option of updating yields as one of the three decisions under the 2014 Farm Bill (see ARC-PLC Decision Steps for more detail). Part of the process of updating yields is providing farm yields to the Farm Service Agency (FSA). Documentation for the provided farm yields is not required at sign up, but will be required if the farm is audited sometime in the future. If available, Risk Management Agency (RMA) records can be used for documentation and are likely the easiest option for providing documentation.

Each program crop on a FSA farm has a current program yield. Current program yields by crop were provided for each FSA farm in a letter received from FSA in August 2014. A landowner can update a crop’s program yield. The updated yield will equal 90% of the average of farm yields from 2008 through 2012, with a plug yield equal to 75% of county average replacing missing yields and actual yields below the plug yield. Program yields can be updated on a crop by crop basis. For example, a landowner could choose to update a corn yield and not update a soybean yield.

The program yield will impact payments under Price Loss Coverage (PLC) with higher yields resulting in higher payments when PLC makes payments. It seems prudent to update a yield when the updated yield is higher.

When updating, yields will need to be provided for years in which the crop is planted and documentation exists. Yields will be reported to FSA on a worksheet with the designation CC-859. Figure 1 shows an example of CC-859 in which corn was planted in 2008, 2010, and 2012 and soybeans were planted in 2009 and 2011. Only years in which the crop was planted will be used in calculating the updated yield. For the example, yields in 2008, 2010, and 2012 will be averaged for corn and yields in 2009 and 2011 will be averaged for soybeans. 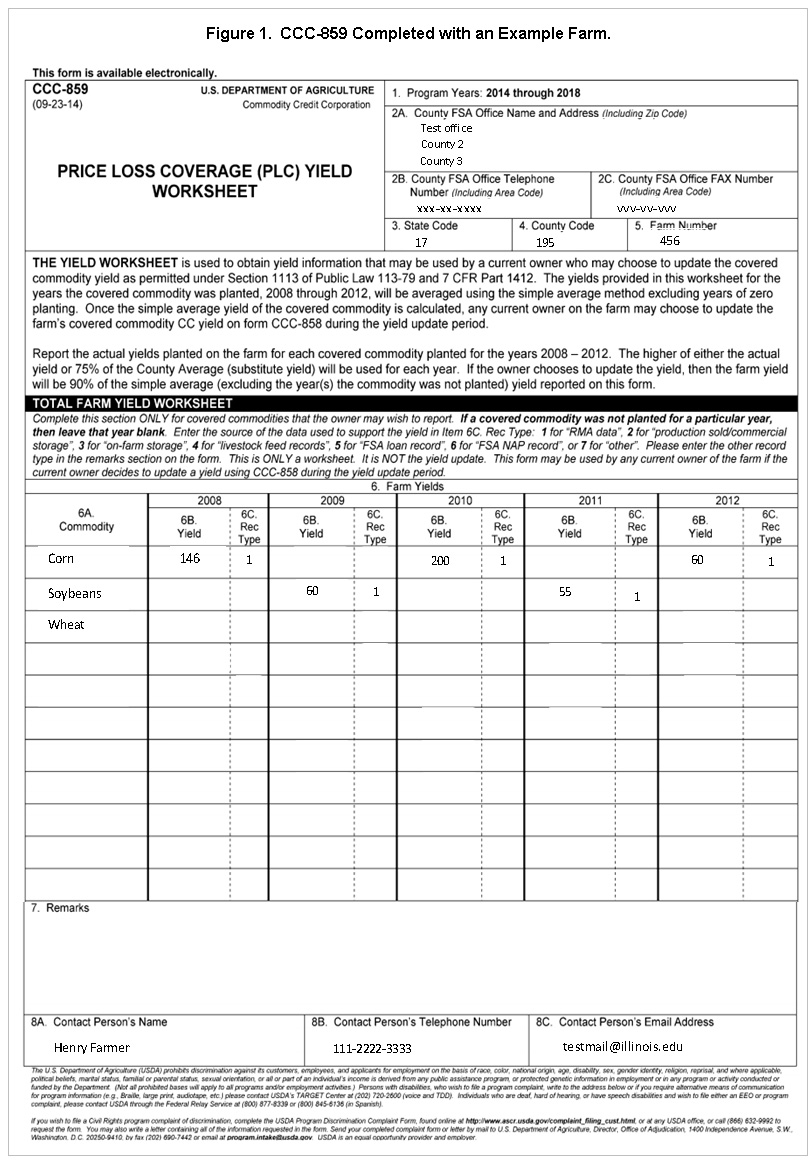 Yields should only be provided for years in which the crop was planted and documentation exists. If documentation does not exist, the plug yield will be used rather than the farm’s actual yield. Documentation source will be indicated by numbers next to each year’s yield. Alternatives are:

For the example, RMA records are used for all yields.

Appropriate RMA records are those used to calculate Actual Production History (APH) yields for crop insurance purposes. Figure 2 shows an example for corn of the types of information associated with an APH record. In this example, the yearly yields records with “A” associated with them would be used to report yields to FSA. For this example, yields report to FSA are 223 bushels per acre for 2009, 203 for 2009, 143 or 2010, 154 for 2011, and 60 for 2012. 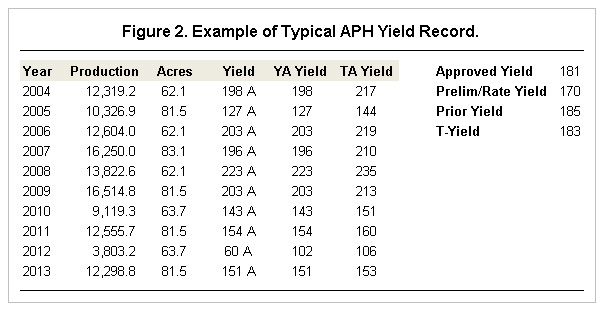 To be used, the yield from a crop insurance record must be an actual yield. In most cases, this will be designated as “A” on the crop insurance record, as is the case in the example in Figure 2. Other codes that are considered actual yields are “A”, “AY”, “G”, “GY”, “NA”, “NG”, “NV”, “V”, and “VY”. Yields without the above designations cannot be used. For example, transitional yields are used when in calculating APH yields for crop insurance records when limited years of yield data exist. These values are indicated by a “T” on the APH record. A “T” yield can not be used to provide documentation to FSA.

When an FSA farm unit includes more than one insurable unit calculating an acre-weighted average is appropriate. As an example, take an FSA farm that contains two insurable units and the 2009 yield is being calculated. In 2009, insurance unit A has 60 acres and insurance unit B has 50 acres. In 2009, unit A had a 180 bushels per acre yield and unit B has a 170 bushels per acre yield. An appropriate yield to report for this FSA farm is 175 bushels per acre (180 yield unit A x 60 acres unit A /110 total acres + 170 yield unit B x 50 acres unit B/ 110 total acres).

In other cases, multiple FSA farms will be part of one insurance record. For example, a farm uses enterprise units for insurance, which include all of one crop in one county. Two or more FSA farms may exist in one enterprise unit. In these cases, the same yield from the RMA record can be used for each FSA farm in that unit. Alternatively, yields can be allocated to each FSA unit. However, this will require evidence for this allocation, such as settlement sheets or some other outside verifiable record.

Yield updating will require reporting farm yields to FSA that can be documented with evidence acceptable to FSA. Updating should be considered if the updated yield is higher than the current yield. RMA records can be used to document yields reported to FSA.