Differences in expected payments between Agricultural Risk Coverage – County Coverage (ARC-CO) and Price Loss Coverage (PLC) will be an important factor when making the program choice decisions offered under the 2014 Farm Bill. (See Step 4 on Farm Bill Toolbox for other factors – type of risk covered and availability of SCO –that influence the ARC-CO and PC decision). Realization of Market Year Average (MYA) prices and county yields from 2014 through 2018 will affect differences in payments. Much of the focus will be on price levels. General rules of thumb are: 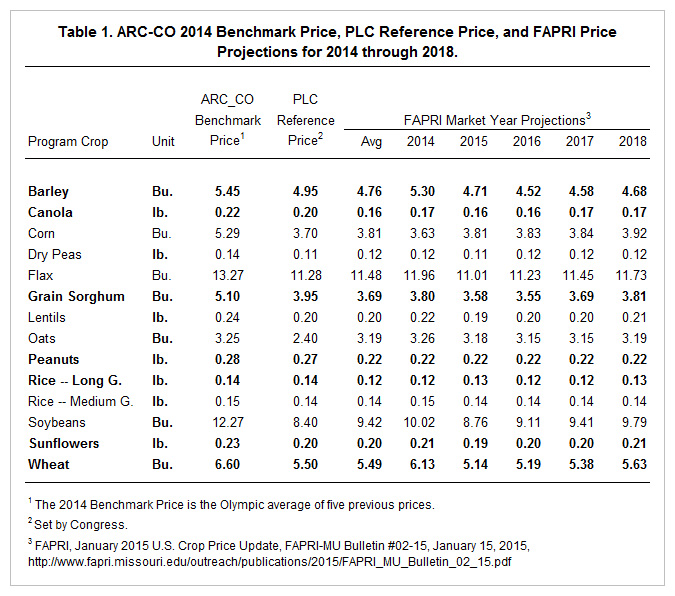 In Table 1, a crop is bolded when FAPRI’s average MYA price for 2014 through 2018 is below the reference price. These crops include barley, canola, grain sorghum, peanuts, rice – long grain, sunflowers, and wheat. In these cases, PLC often has higher expected payments than ARC-CO.

The Sample Farms section of Agricultural Price Analysis System shows expected payments for ARC-CO and PLC for program crops. These are county specific. A user can select a county and then see expected payments for three price series. One of those is the FAPRI series shown above. Expected payments in APAS are generated by a stochastic process that varies prices and yields (see farmdoc daily October 16, 2014 for more detail). Yearly prices will equal the expected prices from FAPRI. 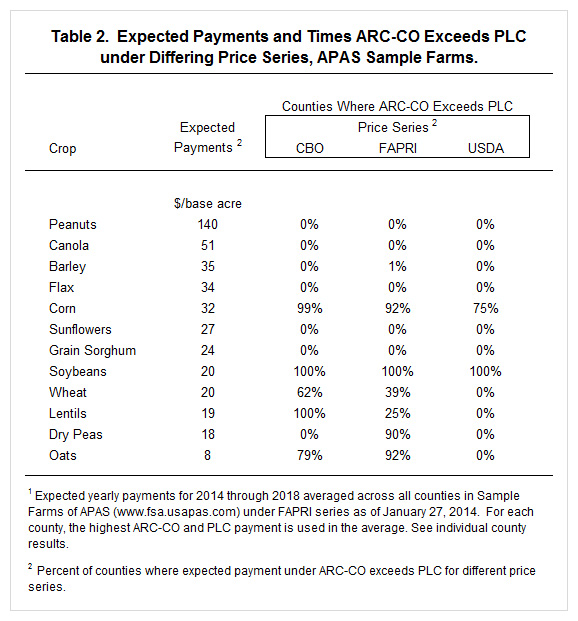 These rankings are useful for choosing between the two choices for base acre allocations. Many landowners will wish to choose the allocation with the majority of the acres in program crops with the higher expected payments (see farmdoc daily January 21, 2015 for more detail).

These percentages are shown for three price series: CBO, FAPRI, and USDA. FAPRI prices are shown in Table 1. For most crops, CBO has higher prices than FAPRI, and FAPRI has higher than USDA. For corn, ARC-CO makes higher payments than PLC in 99% of counties under CBO prices, 92% under FAPRI, and 75% under USDA. These percentages are explainable based on expected prices in those series. CBO prices have average expected prices above $4.00, resulting in few payments to PLC. FAPRI prices are near $4.00, still leading to ARC-CO having higher payments. USDA prices are lower and below the reference price. PLC payments increase in these scenarios.

PLC is expected to have higher payments in most counties for many of the crops in all three price scenarios. These crops are peanuts, rice, canola, grain sorghum, sunflowers, and flax. PLC likely will be the preferred choice in these cases. Crops where ARC-CO often has higher expected payments are corn, soybeans, lentils, wheat, dry peas, and oats. Here price expectations influence which program will have the higher payments.

For corn, ARC-CO usually will have higher expected payments than PLC when the 2014-2018 prices are above $3.30 per bushel. In 2014, ARC-CO likely will pay more than PLC in many counties, except for those counties with exceptionally high yields. Many high-yielding counties will be located in central Illinois and Missouri (see Figure 1 in farmdoc daily January 22, 2015 for state estimates).

For soybeans, ARC-CO usually will have higher expected payments than PLC when 2014-2018 prices are above $7.80 per bushel. For 2014, most areas as are projected to have low ARC-CO payments and no PLC payments (see Figure 2 in farmdoc daily January 22, 2015).

For wheat, ARC-CO usually will have higher expected payments than PLC when 2014-2018 prices are above $5.50 per bushel. The $5.50 break-even point is close to where both CBO and FAPRI are projecting prices. For 2014, ARC-CO is projected to make payments in many areas because of low yields (see Figure 3 in farmdoc daily January 22, 2015). PLC is not projected to have payments

Besides APAS, a FAST spreadsheet called the ARC-CO PLC tool (available here) can be used to compare payments under differing MYA prices and county yields. A comparison of APAS and the spreadsheet is given in farmdoc daily October 16, 2014.

Expected payments are one factor for choosing between ARC-CO and PLC. Expectations are coming into clearer focus. More guidance will be available in early March after release of 2014 county yield estimates.