Supplemental Coverage Option (SCO) is a new crop insurance product available this year when producers do not choose to receive 2014 Farm Bill payments through Agricultural Risk Coverage (ARC). We compare Revenue Protection (RP) farmer-paid premiums to RP+SCO premiums. In northern and central Illinois, RP+SCO premiums often exceed RP premiums at the 80% coverage level. Sometimes, RP+SCO premiums are lower than 80% RP premiums in southern Illinois. Overall, use of SCO as a means to reduce farmer-paid premium costs is questionable, particularly in northern and central Illinois. Furthermore, additional protection offered by SCO is limited when 85% coverage level products are available in the COMBO product. These factors suggest that commodity program decisions between ARC and Price Loss Coverage (PLC) should be based on the merits of those commodity programs rather than on the availability of SCO.

SCO is a crop insurance product that provides protection from an 86% coverage level down to the coverage level of the underlying COMBO product. In most cases, farmers use the Revenue Protection (RP) plan associated with the COMBO product. If a farmer purchases RP at an 80% level, SCO provides protection in a band from 86% down to 80%. Unlike the underlying RP product, losses within the 86% to 80% band will not be triggered by farm losses but will be triggered by county revenue losses. In essence, SCO offers county level coverage above the underlying COMBO product. More discussion of SCO is available at farmdoc daily April 24, 2014.

Premium costs for RP and SCO are illustrated for corn in Logan County, Illinois in Table 1 (see the footnote for parameters used to generate premium). These quotes were generated using the 2015 Crop Insurance Decision Tool, a Microsoft Excel spreadsheet available for download in the FAST section of farmdoc. RP premiums range from $.69 per acre for a 50% coverage level up to an $18.96 per acre premium for an 85% coverage level. 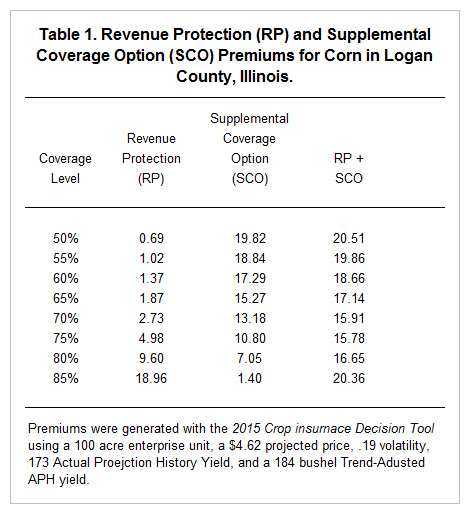 SCO for Corn in Other Counties

Figure 1 shows the minimum RP+SCO premium minus the 80% premium for all counties in Illinois. Premiums were generated for example farms whose yields were based on average county yields. 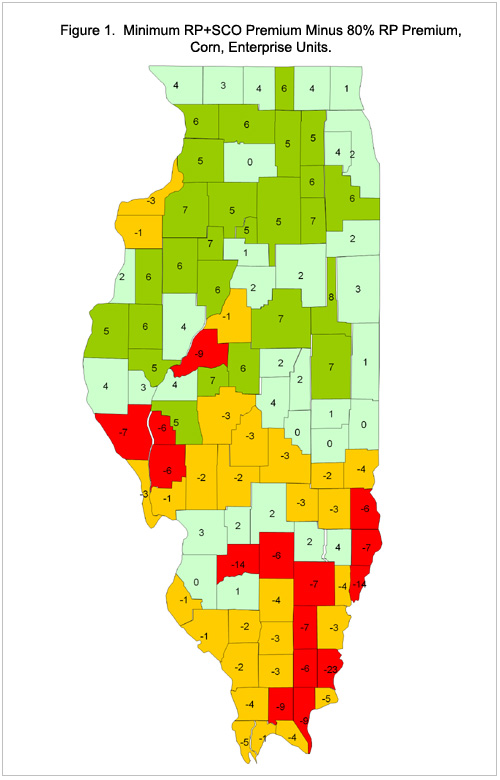 Many of the counties in southern Illinois have risks that are idiosyncratic to farms. These idiosyncratic risks include being located near rivers that flood and farmland with low water-holding capacity resulting in very low yields in low rainfall years. Because of this, some farms in a county will have low yields while other do not, resulting in high RP premiums.

Figure 2 shows premium differences for soybeans. Northern and central Illinois have minimum RP+SCO premiums above 80% RP. Southern Illinois counties have the opposite. 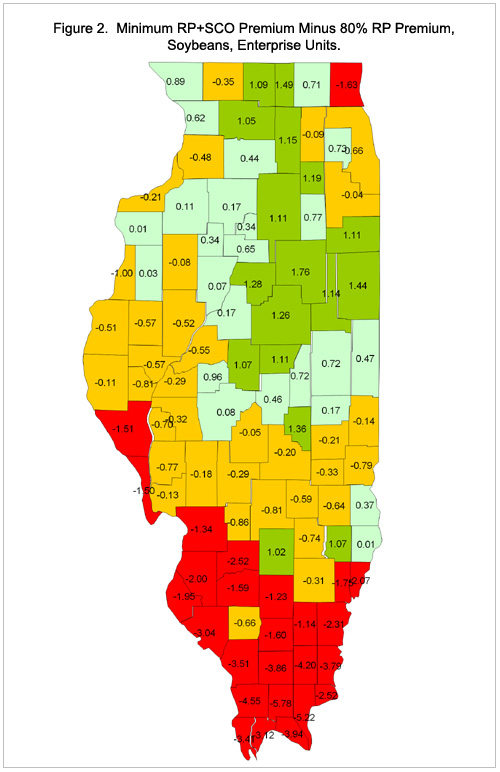 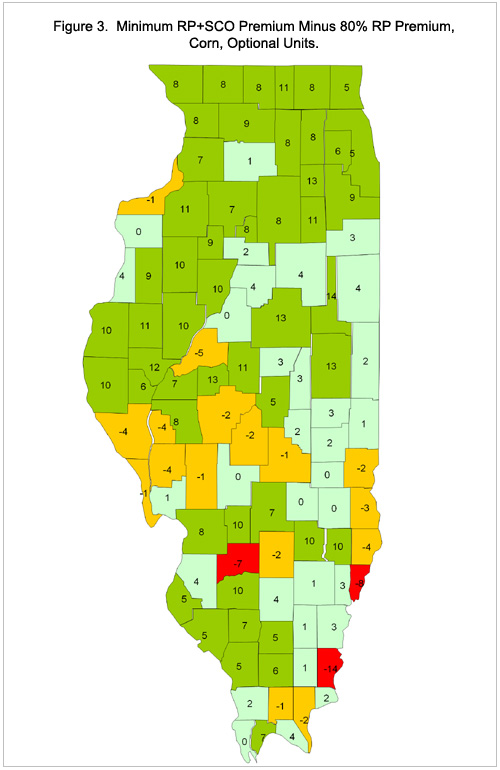 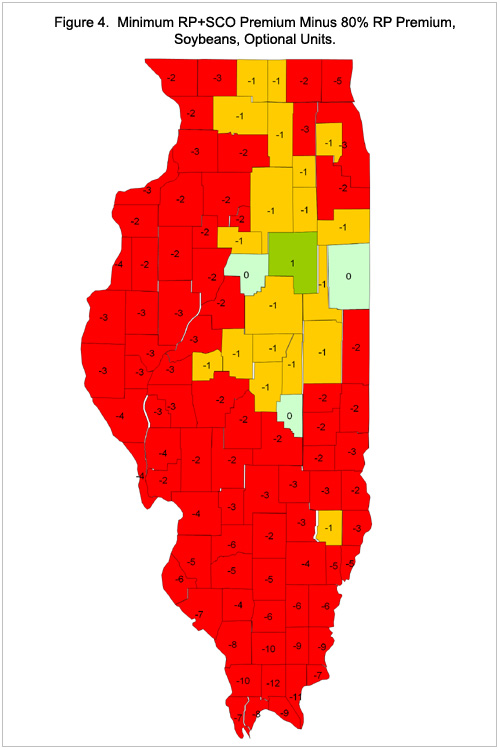 In northern and central Illinois, RP+SCO premiums will be above those for 80% RP for corn. This factor significantly reduces the incentives to use SCO. Furthermore, use of SCO will not greatly enhance risk protection as the introduction of SCO introduces a small band of coverage not available under RP. SCO introduces a band from 86% to 85%, with the caveat that this is county-level protection, not farm-level. In these regions, commodity program decisions likely should focus on relative differences between ARC and PLC, as those differences likely will be larger than gains from SCO.

There may be more incentives to use SCO to southern Illinois, as RP+SCO premiums will cost less than an 80% RP policy. However, southern Illinois has idiosyncratic risks where some farmers will face low yields in a county while others do not. This introduces the problem of the farm having a loss and the county not having a loss. On the other hand, if low coverage levels are in use, SCO will provide additional risk protection, particularly with that related to price losses.