The idea that larger farms have a more efficient cost structure was explored in the July 18, 2014 article. That earlier article looked at some of the variable costs (crop costs and power & equipment costs) that seem to be attention getting when considering economies of scale in farming.

Let’s continue our thinking about the economies of size in three other areas of expense. This 2013 data again considers selected costs from three groups of farms – northern Illinois, central Illinois and southern Illinois.

Crop insurance costs vary between northern, central and southern Illinois as one might expect. Expected yield would be the chief driver of differences in crop insurance premiums and those yields would vary by soil type in the three regions. There is some variance between the acre groups in all three regions of the state, but crop insurance costs are more the same than they are different for the three different size groups within the three regions. General insurance costs vary a bit between regions; central Illinois shows the least cost presumably due to a lesser incidence of livestock buildings or grain handling facilities. Non-land interest is a calculated interest charge that represents an opportunity cost for all non-land assets of the farm operator. The non-land interest cost varied the least among the central Illinois groups of farms. There was a slight trend to a higher non-land interest cost on the larger farm groups in northern and southern Illinois. 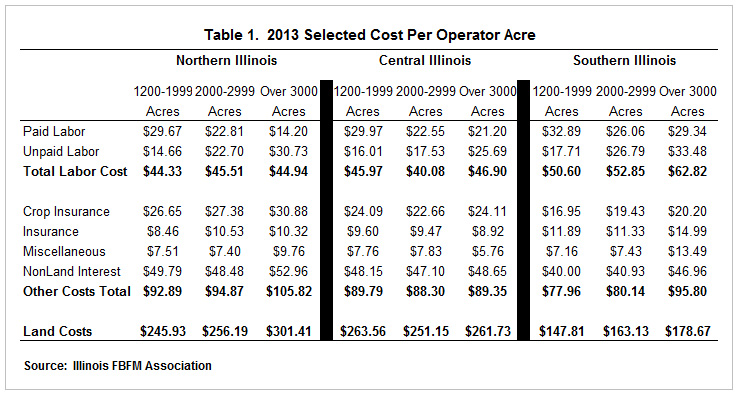 As represented by 2013 data and the factors selected for this article, the greatest economy of scale is present in the paid labor expense. The other costs show little indication that an increasing farm size in acres is linked to a lower cost per acre.

The authors would like to acknowledge that data used in this study comes from the local Farm Business Farm Management (FBFM) Associations across the State of Illinois. Without their cooperation, information as comprehensive and accurate as this would not be available for educational purposes. FBFM, which consists of 5,700 plus farmers and 60 professional field staff, is a not-for-profit organization available to all farm operators in Illinois. FBFM field staff provide on-farm counsel with computerized recordkeeping, farm financial management, business entity planning and income tax management. For more information, please contact the State FBFM Office located at the University of Illinois Department of Agricultural and Consumer Economics at 217-333-5511 or visit the FBFM website at www.fbfm.org.