Per acre state payment indicators are calculated for ARC-CO and PLC for barley, corn, oats, peanuts, long grain rice, medium (and short) grain rice, sorghum, soybeans, and wheat. Primary source of data are the January 12, 2015 WASDE (World Agricultural Supply and Demand Estimates) mid-price estimate and NASS’s (National Agricultural Statistical Service) crop production annual report. The calculations use state yield instead of county yield for ARC-CO and farm payment yield for PLC and thus are not payment estimates but payment indicators. Nevertheless, they help frame perspectives and questions regarding crop program choices as well as potential program cost vs. the direct payment program. The latter was eliminated by the 2014 farm bill. Other discussions of indicated 2014 crop year payments are contained in the farmdoc daily articles of August 13, September 18, October 14, December 18, 2014 and January 22, 2015.

ARC-CO makes a payment if county revenue is below 86% of the county’s benchmark revenue. Benchmark revenue involves multiplying 5-year Olympic moving averages (removes high and low values) of county yield times U.S. crop year price. ARC-CO payment is capped at 10% of benchmark revenue. PLC makes a payment if U.S. crop year price is below the crop’s reference price. Reference prices are specified in the 2014 farm bill. PLC payments are capped by the national loan rate. A Farm Service Agency payment entity can receive no more than $125,000 in payments from all crop programs, including ARC-IC (individual), for all program crops except peanuts, which has its own $125,000 payment limit per payment entity.

Because PLC is a U.S. price payment program, in a given year a payment is or is not received by all participants (states in this analysis). Payment differs only by farm program yield. In contrast, ARC usually makes payment to some, perhaps most, but not all participants unless U.S. crop year price is far above or far below the price benchmark for the most recent 5 years. As a revenue program, ARC payments depend on the variation of both yield and price. It is unusual for yield to be uniformly good or bad across the U.S. where good and bad is defined relative to yields for the most recent 5 years. In short, ARC and PLC have different, often quite different, payout structures. 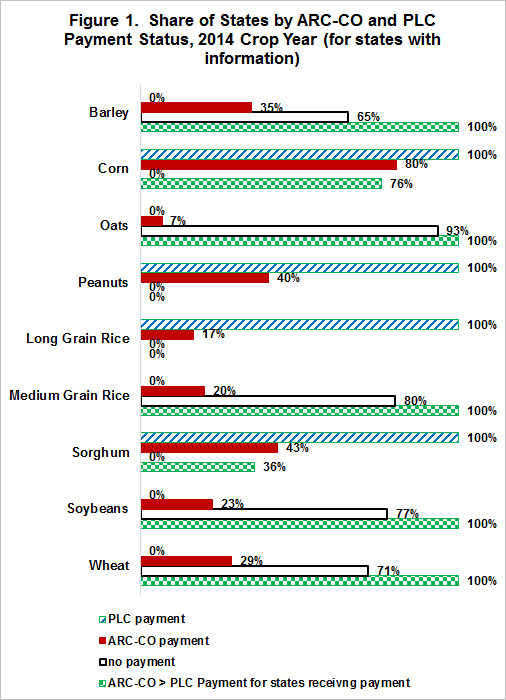 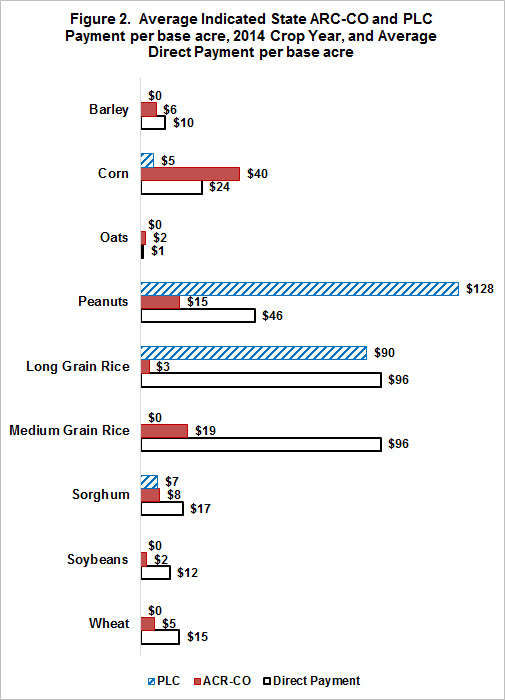 During the 2014 farm bill debate, Congress selected PLC reference prices for peanuts and long grain rice that were closer to 2008-2012 market prices than for other crops. A commonly cited reason for long grain rice was to use PLC to provide payments that would replace the $96 per base acre direct payment that rice gave up (see Figure 2). At least for the 2014 crop year, indicated PLC payments suggest Congress is likely to accomplish this objective. Note the stark difference that exists between long and medium (and short) grain rice. For the latter, no PLC payment is currently expected and only 1 state has an indicated ARC-CO payment (Texas). The policy driver for peanuts is less clear, but, in terms of only the 2014 crop year, peanuts is currently indicated to benefit the most among the crops analyzed from enactment of the 2014 farm bill. It gave up roughly $46 per base acre in direct payments with indicated 2014 PLC payments of $128 per base acre.