Farm Service Agency (FSA) farm operators have to elect their Title 1 crop program for the 2014-2018 crop years by March 31, 2015. At this deadline, good information will exist on 2014 crop yields for individual farms and counties for which the National Agricultural Statistics Service (NASS) reports yields. ARC-CO (Agriculture Risk Coverage – county) uses the latter yields while ARC-IC (ARC – individual) uses the former yields. By February 27, 2015, operators also will know their FSA farm program yield, which is used by PLC (Price Loss Coverage). All 3 options use crop year average price to calculate their payment, if any. Thus, a key question is, “How much uncertainty about 2014 U.S. crop year price remains on March 31, 2015?” This article examines this question. A related farmdoc daily article is “Resolution of U.S. Crop Year Price Uncertainly and Its Implications for the 2014 Farm Program Decision,” published August 28, 2014. Today’s article uses a somewhat different analytical approach and focuses on crop year price uncertainty as of March.

The U.S. Department of Agriculture (USDA) releases a monthly forecast for certain crops of crop year price. The forecasts are reported in WASDE (World Agricultural Supply and Demand Estimates). For a given crop year, forecasts begin with the May WASDE. For example, the May 2014 WASDE contained price forecasts for the now current 2014/2015 crop year. The forecast consists of a low – high price range, which is often averaged to create a mid-price forecast.

Crops examined in this analysis, along with their crop year, are barley, oats, wheat (June 1 through May 31); rice (August 1 through July 31); and corn, sorghum, soybeans (September 1 through August 31). The analysis period is the 1980 through the recently-completed 2013 crop years. Price estimates were not consistently reported by WASDE for the upcoming crop year in May until 1980. 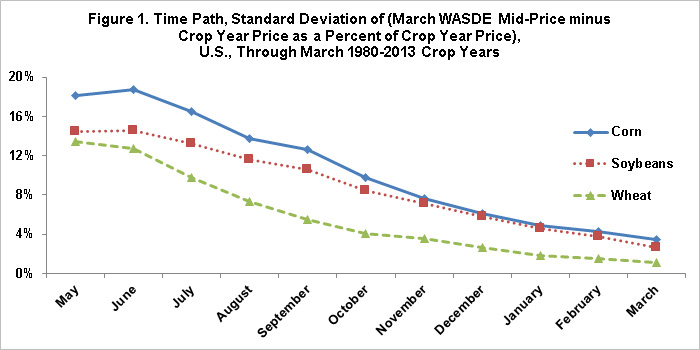 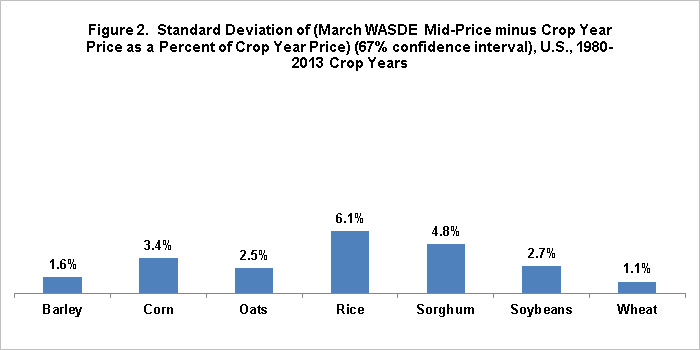 Assessing Crop Year Price Uncertainty as of March WASDE: Standard deviation has a useful attribute in assessing uncertainty. Specifically in this analysis, two-thirds of the final crop year prices will be within plus or minus one standard deviation if we assume the distribution of misses is a normal distribution. Thus, for example, 67% of the final crop year prices are within plus or minus 1.15% of the March WASDE price forecast for wheat. For corn and soybeans, the range is plus or minus 3.48% and 2.78%, respectively. However, 67% may be too small of a statistical confidence interval given the potential importance of the March 2015 WASDE for the crop program decision. A producer may want to know the 99% (instead of 67%) statistical confidence range. This range is plus and minus 3 times the standard deviation. For corn, soybeans, and wheat; the 99% confidence range is plus or minus 10.45%, 8.34%, and 3.45%, respectively (see Figure 3). Thus, the greater the desired forecast confidence, the greater the advantage of wheat in terms of crop year price certainty as of the March WASDE. As an aside, 2 times the standard deviation is used to generate the price range associated with 95% confidence. 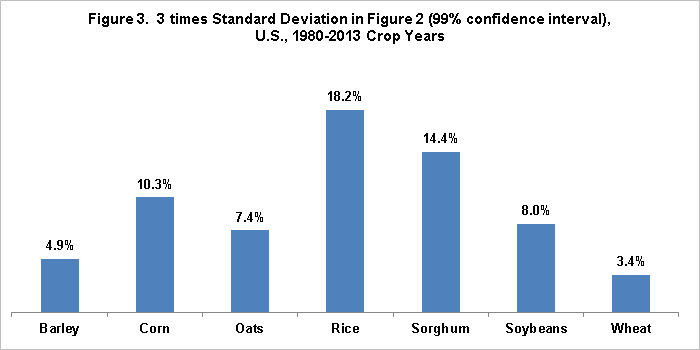