Each year, RMA resets the Projected Prices (PP) and Implied Volatility Factors (IV) that are used in the determination of crop insurance guarantee levels and premium costs. For much of the cornbelt, the Projected Prices are established based on the average of the settlement prices of the crop’s associated harvest-period futures contract during the month of February.1 Other regions with different growing seasons and different sales closing dates use different time intervals, but the principle is to average a set of the market’s estimates of future prices to establish an indemnification price that is intended to be highly correlated with expected revenue from the insured crop. The implied volatility factor, or IV plays a related role in that it is used to convey the market’s best information about the riskiness around the projected price, or in other words, the probabilities that the prices will deviate and by how much from the projected prices. The final IV factor, in contrast to the PP is determined by averaging the implied volatilities of near the money options over the final 5 trading days of the PP determination interval. High IVs indicate greater uncertainty, or higher likelihoods for larger price movements, and lower IVS signal more market confidence that the futures prices will remain in a smaller range. Taken together, the IVs and the projected prices imply a particular underlying price distribution that along with other features, is used to “price” crop insurance. The purpose of this farmdoc daily article is to help better understand the IV concept, demonstrate implications for pricing, and relate to the market’s information about potential price movements prior to harvest.

The IV comes from a basic idea in option pricing that relates a future uncertain price distribution to the price of insurance against price outcomes beyond some strike or trigger price. In the case of insurance, the idea is to identify the fair value today of insurance against prices dropping below the PP before insurance expires, and translated into the revenue distribution associated with correlated yield outcomes. A simplified example is provided to illustrate. Suppose the price of corn were determined by simply rolling two dice and the final price determined as $3.00 + $.10*(total showing on dice). Thus if two 1s were rolled (probability 1/36), the price would be $3.40; if a total of 3 were rolled (probability 2/36) the price would be $3.30, and so on. The likelihood of rolling a total of 7 is greatest at 1/6 and the average of all other prices creates an analog to the futures market would be that the futures price distribution under the dice rolling example would have an average of $3.70 and the volatility, or standard deviation of prices in this case would be about .24 or 6.5% of the average. If you were to calculate the “fair” or expected value of insuring that prices would not drop below $3.50 for example, the cost would be 1/36*(3.5-3.2) + 2/36*(3.5-3.3)+3/36*(3.5-3.4) = $.56 reflecting in each case the likelihood of the price decline below the floor price, and the cost of making up the difference. Any other price would indicate a disagreement with the component values of the guarantee.

Actual prices follow a somewhat more complex distribution, but the ideas extend rather naturally. The Black-Scholes model, which is the most commonly used option pricing model, uses a representation of prices that is referred to as lognormal and which can be completely identified by a mean and a volatility factor. The idea and terminology for the implied volatility comes from running the process in reverse. Given an actually traded option, there is one representation of the underlying price distribution that would have generated the price observed. If one takes the futures price as the estimate of the mean or average, the implied volatility is the value of that factor that would have resulted in exactly the observed price of the option traded. Its interpretation is often in the form of a standard deviation of prices, or sometimes as the percentage of the underlying price itself. In the case of crop insurance, the IVs are taken from a service that tracks the implied volatilities of traded options using options near the money that are expected to be heavily traded and contain accurate information. The remaining step in using in the insurance market is to scale the interval of time that the option trades to reflect the interval of time that actual insurance is in force. While a complex step algebraically, this conversion is fairly standard and common in option pricing applications.

After the final IV is determined, it is then used directly in premium setting along with the projected price and many other related factors. To appreciate the magnitude of the premium impact, consider a case farm in central Illinois in McLean County with a trend adjusted APH of 180. Assuming a projected price of $4.15 and IV of .20 results in premiums as shown below in table 1 for both RP and RP with Harvest Price Exclusion across the available coverage elections. 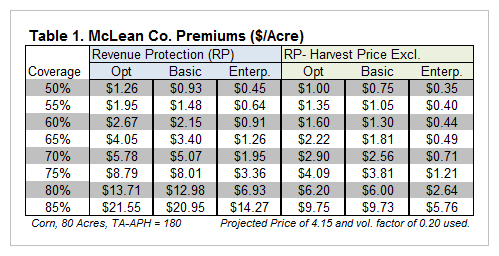 If instead the IV were 10% higher at .22, the premiums below in table 2 would have resulted. 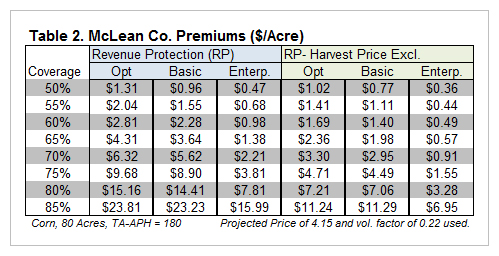 The percentage impacts of a 10% increase in IV are provided in table 3. Importantly, these differ by county and by APH, so results in other locations may differ.2 In general, the impact is greater at higher coverage levels and in cases where the underlying insurance product is less expensive to begin. Soybean results (not shown) follow virtually identical patterns, but at slightly lower levels of impact in terms of percentage changes.

To further understand the information contained in the IVs and projected prices as a complement, figure 1 below shows the distributions implied in the case of $4.15 PP and .20 IV. 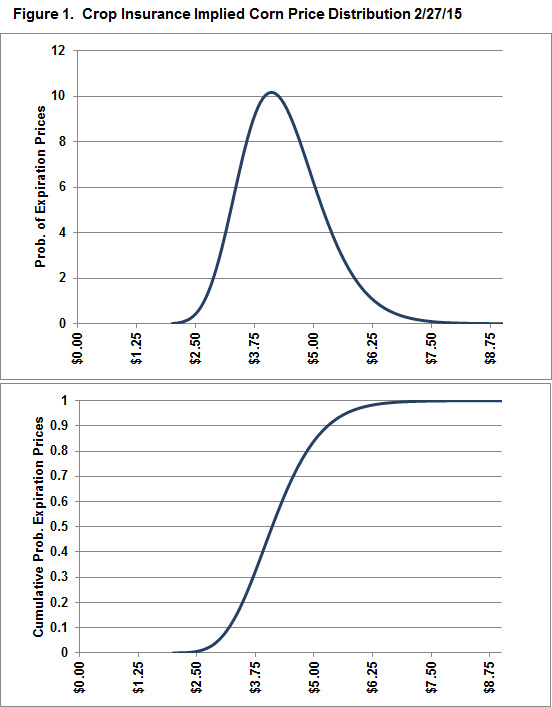 The same information is provided numerically in table 4 in two panels of related information. In the left panel, the prices are given and the implied probability of prices being below those levels in the associated rows of the second column. The right hand panel provides similar information, but with the associated price tabulated against the probability. 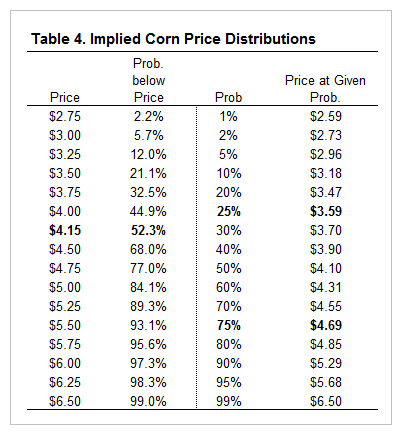 To interpret, the implied distribution has a 52.3% chance of being at $4.15 or lower at the end of the insurance period (as the distribution is not symmetric, the average and median differ slightly). There is 84% likelihood of being less than $5 and so forth. The interquartile range, highlighted in the right hand panel indicates a 50% chance of being between $3.59 and $4.69, again, based on the distribution implied by the crop insurance program parameters at this date. Other information can be similarly interpreted from the entries in the table. Final county and case farm estimates of the likelihoods of insurance payments and levels will be provided at the farmdoc website shortly after the final releases by RMA during the first week of March here.

Future posts will examine the evolution of the price distribution implied as the growing season unfolds and provide updated information about likelihoods of payments against the actual crop insurance factors used in 2015 as these move prior to harvest.

Note – The views expressed herein are solely the author’s opinions and do not necessarily reflect those of others or entities with whom professionally affiliated. All errors and omissions are the author’s alone.

1 For example, in 2015 corn uses the Dec15 futures contract and soybean PPs are determined by the Nov15 futures contract. RMA provides detail by crop and region at http://www.rma.usda.gov/policies/2014/14ceppcorn.pdf.

2 Complete results of the iFARM Crop Insurance Evaluation Model will be released with RMA final projected prices and IV factors at: http://www.farmdoc.illinois.edu/cropins/toolbox/Common_Files/evaluator_2015.asp.