After RP, the product with the next highest use was Area Risk Protection (ARP), a county-level revenue product with a guarantee increase. In 2014, 6.5% of the acres were insured with ARP, with almost all acres insured at the 90% coverage level (see Table 1). 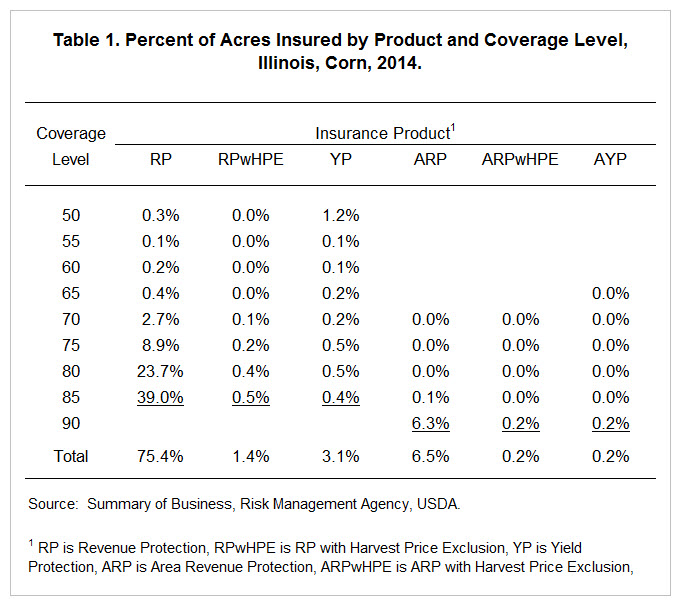 Overall, crop insurance use for corn in Illinois can be categorized into two categories:

The remainder of the products and coverage levels were used to insure only 9.1% of the planted acres, with 14.0% of planted acres not insured with any product.

Table 2 shows 2014 and 2015 RP premiums for a Champaign County example farm having a 184 bushel per acre Trend-Adjusted Actual Production History (TA-APH) yield. Premiums are for a 100 acre enterprise unit. The premium for an 85% coverage level increased from $15.02 per acre up to $16.20 per acre in 2015. Several factors influence rates: 1) changes in underlying rates (increased premium), 2) lower projected price (lowered premium), and 3) increase in volatility (increased premium). By far, the largest factor impact premium between 2014 and 2015 was the volatility increase. The volatility in 2014 was .19 while the 2015 volatility is .21. A .19 volatility in 2015 would have resulting in 2015 premiums being lower than 2014 for the example shown in Table 1. 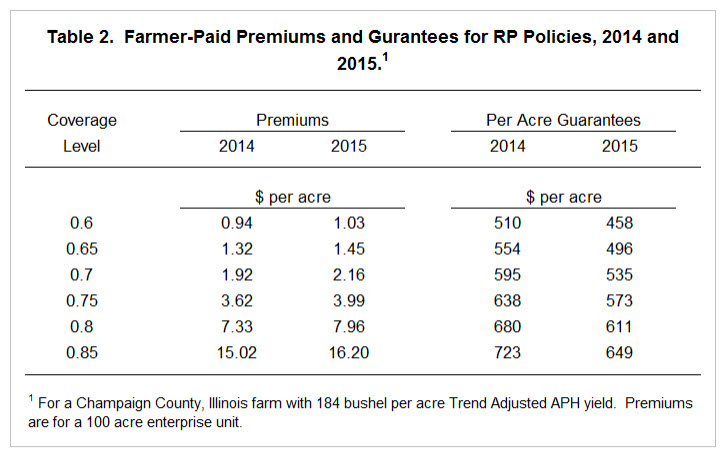 New this year is the Yield Exclusion. Yield Exclusion allows specific years to be dropped from the calculation of guarantee yields for crop insurance. For corn, 2012 can be excluded from APH calculation in many counties in central and southern Illinois, along with Jo Daviess, Stephenson, and Winnebago counties (See map in the farmdoc daily article of January 13, 2015).

Product recommendations have not changed from previous years recommendations, except for the use of YE (see the farmdoc daily article of February 11, 2014 for last year’s recommendation). In my opinion, the following basic product will be appropriate in most situations is:

This choice will provide cost effective protection based on farm yields. It has a harvest price increase provision, which provides useful protection to those farmers who hedge or price grain prior to harvest. The harvest price provision also is useful in widespread drought years, providing payments when yields are below guarantees at the higher harvest prices.

In certain cases, there will be deviations from this basic product.

When should the Area Risk Protection (ARP) be used?

Using a county-level revenue product may be appropriate in the following situations:

Generally, ARP should be taken at the highest coverage level of 90%. Premiums and payments can be varied by changing the protection factor. There are a number of features that farmers should be aware of if they take ARP:

RP-HPE provides a revenue guarantee that will not increase if the harvest price is above the projected price. RP-HPE may be appropriate in the following situations:

Who should take basic or optional units?

Who should not take the TA-APH Yield Endorsement?

The TA-APH yield endorsement is beneficial in the vast majority of situations. It will provide the same dollar guarantees for the same or lower price. The only situations TA-APH is not beneficial is when yields are extremely low and the APH yield is based on floors and other limits.

Who should take SCO?

Those individuals who take the COMBO product at lower coverage levels may find SCO beneficial. This could because of having high risk farmland or being in a county whose premiums increase greatly as coverage levels increase (e.g., Saline County, Illinois).

More details on 2015 crop insurance are available in the crop insurance section of farmdoc. There you will find access to online tools providing premiums and evaluations of crop insurance payouts. Also, a Microsoft Excel tool entitled the 2014 Crop Insurance Decision Tool is available for download from the website.