Commodity price expectations for the next five crop years are a big driver (farmdoc daily January 27, 2015) of the farm program decision. To assist with that decision, the Illinois-led coalition and the Agricultural Policy Analysis System (APAS) web-based tool are providing an additional price perspective that is based on Chicago Board of Trade (CBOT) futures market prices for corn, soybeans and wheat. This article further evaluates corn and soybean prices for producer decision making; it builds upon previous discussions about price forecasts and the web-based tools (farmdoc daily August 7, 2014; May 13, 2014; February 4, 2015; February 12, 2015; February 17, 2015).

The Price Loss Coverage (PLC) program in the 2014 Farm Bill provides payments when national marketing year average (MYA) prices are below the reference price. It is a revised version of the counter-cyclical payments program from the 2002 and 2008 Farm Bills, which date to the target price program of the Agriculture and Consumer Protection Act of 1973. The Agriculture Risk Coverage (ARC) programs (both county and individual) are revenue-based and use averages of historic MYA prices and crop yields compared with current crop year MYA prices and crop yields to determine the size of payments. The farmer’s decision is between two very different types of programs (fixed price vs. revenue), but price expectations over the next 5 crop years are a key component of both programs. Yields play in important role in both ARC programs and must also be factored into the final decision.

Any method used for forecasting prices into the future will be subject to considerable error, making it difficult to form price expectations for the program decision. Thus far, much of the public discussion of price expectations has focused on MYA price forecasts from the Congressional Budget Office (CBO), USDA and the Food and Agricultural Policy Research Institute at the University of Missouri (FAPRI). All three are well regarded with significant experience in developing price forecasts that typically rely on large models, large databases, and expert opinion. They are, however, most often used in policy discussions and to score (i.e., develop USDA and Congressional budgets) commodity programs and policy options being debated in Congress. When first conceived, the primary goal for these efforts was not to aid in producer decision-making for risk management or farm programs and they have had very limited use for such purposes. Each has produced different price forecasts and made adjustments as the marketing year unfolds. For example, the CBO forecasts produced in the spring of 2014 were much higher than USDA and FAPRI for corn and soybeans. In January 2015, CBO lowered its price forecast and then revised it slightly on March 9th (March 2015 Baseline). The change in CBO’s forecast for corn and soybeans from the April 2014 forecast to the March 2015 forecast is shown by Chart 1. 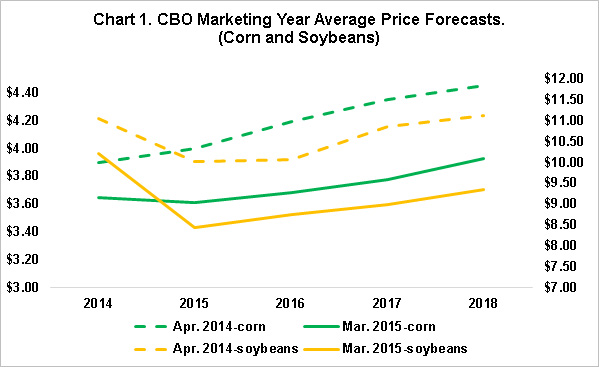 Given the vast unknown for prices in the future, the program decision is arguably best thought of (farmdoc daily October 16, 2014) in terms of price ranges (high vs. middle vs. low) than as an exercise in guessing what the exact MYA price for the 2014 through 2018 crop years will be. To provide another alternative for corn, soybean and wheat farmers, APAS has introduced CBOT futures prices for those commodities to create a hybrid price series. The CBOT futures prices have been adjusted to reflect the average historical differences between the futures price and the cash or MYA price (known as basis). Specifically, this alternative series uses December corn and November soybeans futures for the 2015 through 2018 crop years, adjusted for historic basis.

Charts 2 and 3 provide the most recent price forecast from the three policy models (CBO, USDA and FAPRI), as well as the March 6, 2015 futures prices for corn and soybeans respectively. 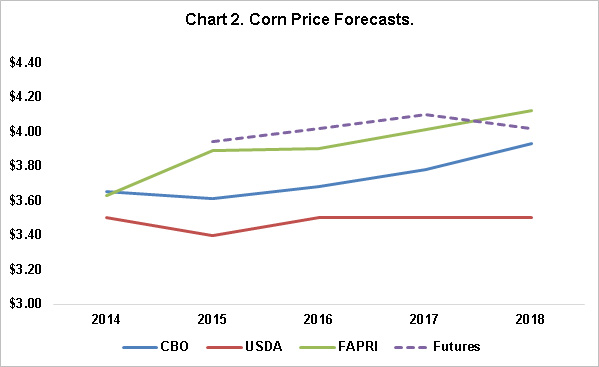 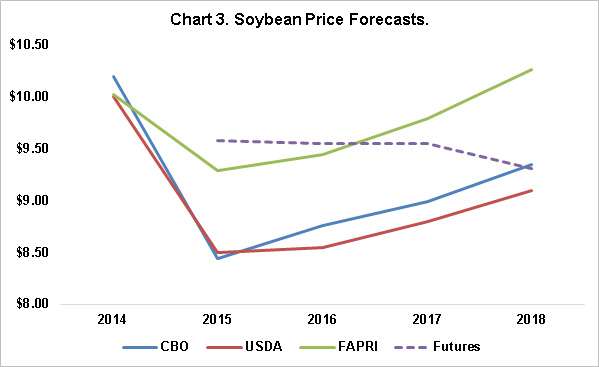 As discussed above, price forecasts have very limited accuracy – we can expect all forecasts to be wrong – which complicates the decision for farmers given the important role of prices. As discussed in previous articles, higher price expectations for the 2014 through 2018 crop years would tend to weigh in favor of ARC-CO for corn and soybean base, whereas very low price expectations would favor PLC.

In the face of that reality, another way to try and reason with price forecasts in the program decision is to compile them to get a picture of the area they are covering. Charts 4 and 5 make those compilations for corn and soybean prices by creating a price band between the highest and lowest price point for each crop year. The mid-point between the highest and lowest is calculated and included, as are the reference price and the 5-year Olympic average price (calculated using the mid-point prices). Importantly, this Price Band does not reflect historical forecast errors or accuracy, as is often done when constructing a statistical range of prices built around standard deviations and probability. It is simply the difference between the highest and lowest prices available in APAS to add perspective on all of the prices available in the web tool for the farmer’s decision. 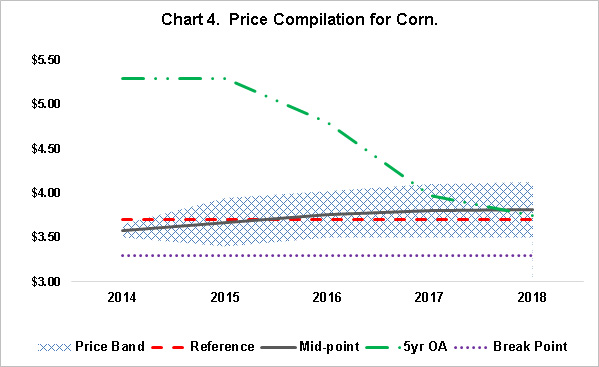 Chart 4 highlights the moderately difficult decision for farmers with corn base. The reference price runs close to the mid-point price while the low end of the Price Band is below the reference price in every year (compare to soybeans in Chart 5). Given the prices shown here, we would expect the best chances for PLC payments in the 2014 and 2016 crop years, however, it appears that overall more of the Price Band is above the reference price for the entire five-years. To compare ARC-CO and PLC, Chart 4 also includes the Break Point price ($3.30), which is generally where PLC would be expected to average more in per acre payments than ARC-CO over the five-year expected life of the 2014 Farm Bill. If the farmer’s price expectations fall within the Price Band there would be some expectation for assistance from PLC but overall ARC-CO would be expected to provide more assistance and be more effective. In other words, price expectations for corn within the Price Band would tend to weigh in favor of ARC-CO. 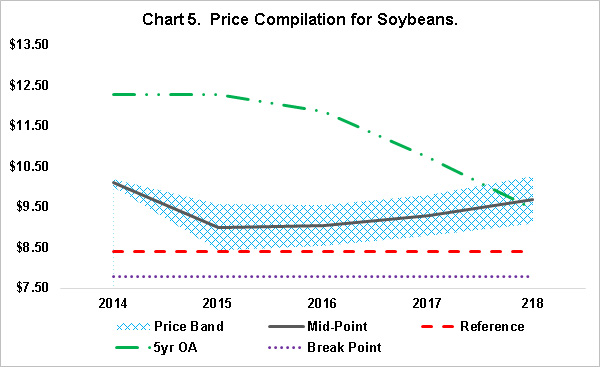 The perspective for soybean base is different as seen in Chart 5. All current price information creates a Price Band where even the low end is above the reference price. The mid-point price is also consistently well-above the reference price, and all remain far above the Break Point price ($7.80). Chart 5 adds weight to the conclusion that ARC-CO would be more effective than PLC for soybean base. A farmer’s price expectations for soybeans would have to be significantly lower than any of the forecasted prices to weigh in favor of PLC.

As mentioned above, the missing elements in Charts 4 and 5 are county yield estimates for future crop years. This is an important factor for the farmer to consider in making the program decisions. The ARC-CO provides some assistance for yield losses at the county level but PLC does not. High county yields like those experienced in many counties in 2014, however, could reduce or even eliminate ARC-CO payments. The farmer’s decision should include how much weight to give to yields.

The farm program decision is particularly challenging given the substantial unknowns about prices and yields in future crop years. As farmers close in on the March 31st deadline, sorting out how the PLC and ARC programs will work under different price scenarios remains important. To assist with this decision, APAS now includes prices based on Chicago Board of Trade futures for corn, soybeans and wheat (adjusted for historic basis) in addition to the price forecasts by CBO, USDA and FAPRI. All of these prices are charted to provide possible high and low price expectations that can be compared to key program components. Actual prices, however, can and will vary from those forecasts. Nevertheless, the band or area between the high and low prices can be a valuable perspective to help guide farmers in choosing the programs that work best for their specific farm operations.