Most of the 2014 insurance payments on COMBO products have been entered into Risk Management Agency’s Summary of Business, allowing us to calculate loss performance for individual products accurately. This article describes loss performance for Revenue Protection (RP), a revenue insurance plan used to insure most acres in the United States. Corn, soybeans, and wheat had loss ratios of 1.04, .54, and 1.12, respectively. Loss ratios were above 1.0 in many counties of Iowa and Minnesota for corn and soybeans. Counties in the southern Great Plains had loss ratios above 1.0 for wheat. In Illinois, RP loss ratios were .40 for corn and .24 for soybeans. 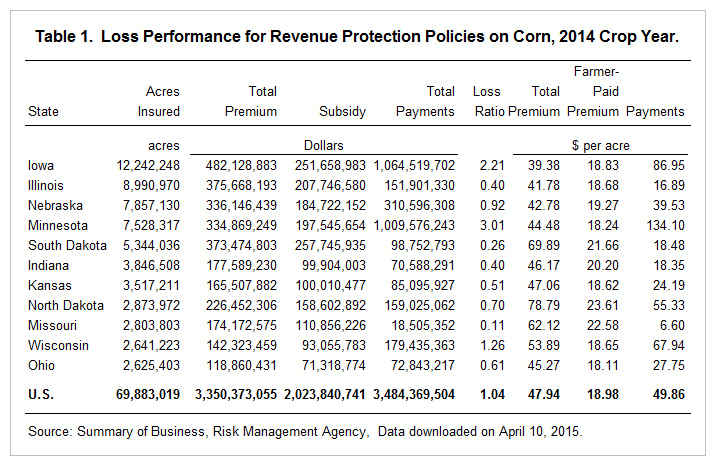 Loss experience varied tremendously across states. For the eleven states with the most insured acres, RP’s loss rate was the highest for Minnesota at 3.01 and the lowest for Missouri at .11 (see Table 1). Iowa had a loss ratio of 2.21 while Illinois had a .40 loss ratio.

For Midwest states, the 2014 projected price was $4.62 per bushel while the harvest price was $3.49 per bushel. The harvest price was 75% of the projected price, meaning that coverage levels of 80% and 85% would have crop insurance prices if the actual yield did not exceed the guarantee yield. While much of the country had above average corn yields, there were areas of the country where yields were at or below guarantee yields. These areas included northern and central Iowa, Minnesota, and Wisconsin. As a result, RP products had high loss ratios in these areas, as illustrated in Figure 1 which shows RP loss ratio by county (see Figure 1). In most other areas of the country, loss ratios were well below 1.0. As one would expect, loss ratios were higher in areas with lower relative yields. 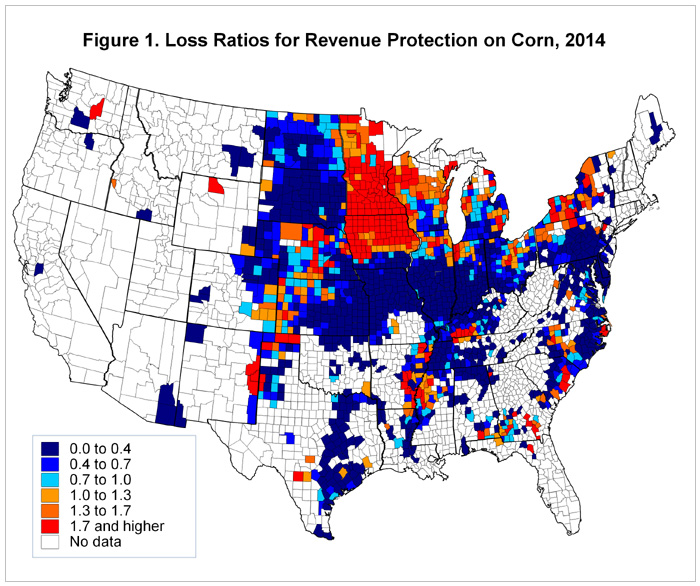 In 2014, RP was used to insure 65.2 million acres of soybeans in the United States, representing 88% of total acres insured with crop insurance. Total premiums were $2,092 million and total payments were $1,126 million (see Table 2). Total payments were far less than total premiums resulting in a loss ratio of .54. Since 2008, loss ratios for soybeans across all policies have not exceeded 1.00. On a per insured acre basis, insurance payments equaled $17.27 per acre. 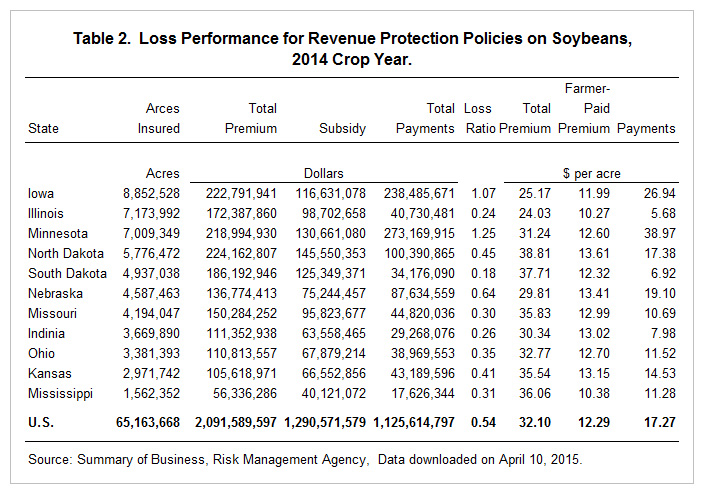 Loss experience for soybeans had less range than those for corn. For the eleven states with the most insured acres, RP’s loss ratio was the highest for Minnesota at 1.25 and the lowest for South Dakota at .18. Iowa had a loss ratio of 1.07 while Illinois has a .24 loss ratio.

Most counties across the United States had loss ratios well below 1 (see Figure 2). Areas with loss ratios above 1.00 included counties in northern and central Iowa, Minnesota, northern Wisconsin, and some counties in Michigan, and New York. 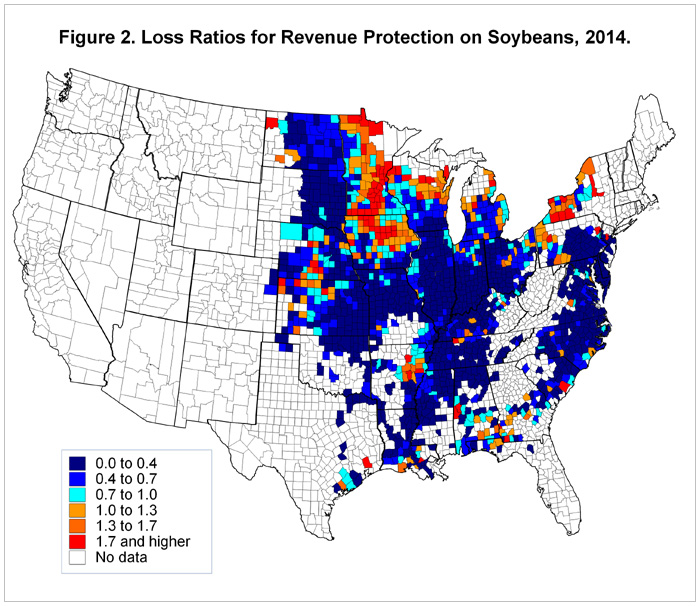 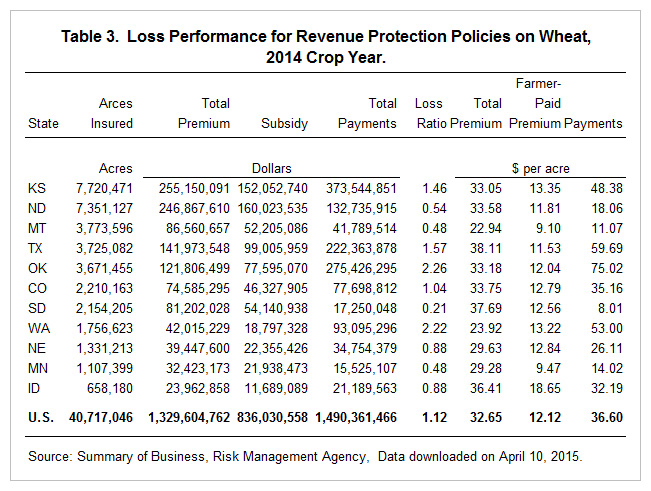 Figure 3 shows a map of county loss ratios for wheat RP polices. As can be seen, many counties in Texas, Oklahoma, and Kansas had loss ratios above 1.00. Many farms in this area had low yields. Other areas of payments occurred in Washington, Wisconsin, Illinois, and along the Mississippi Delta. Large areas with low loss ratios include Montana, North Dakota, South Dakota, Virginia, North Carolina, and South Carolina. 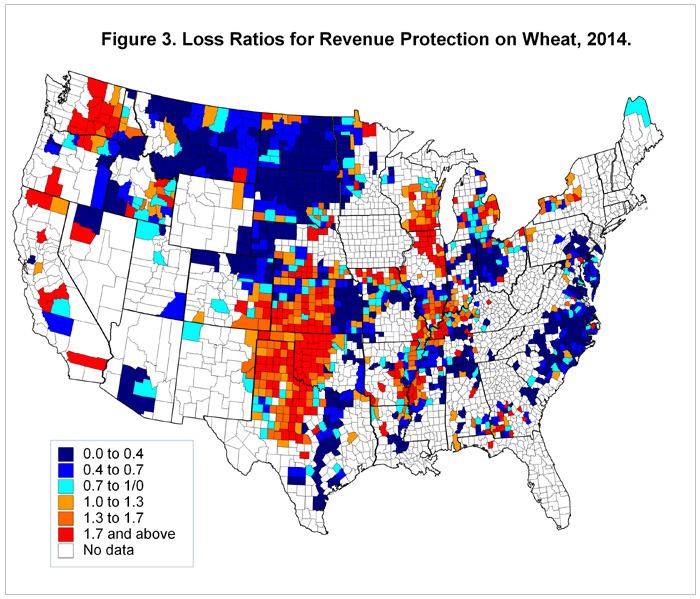