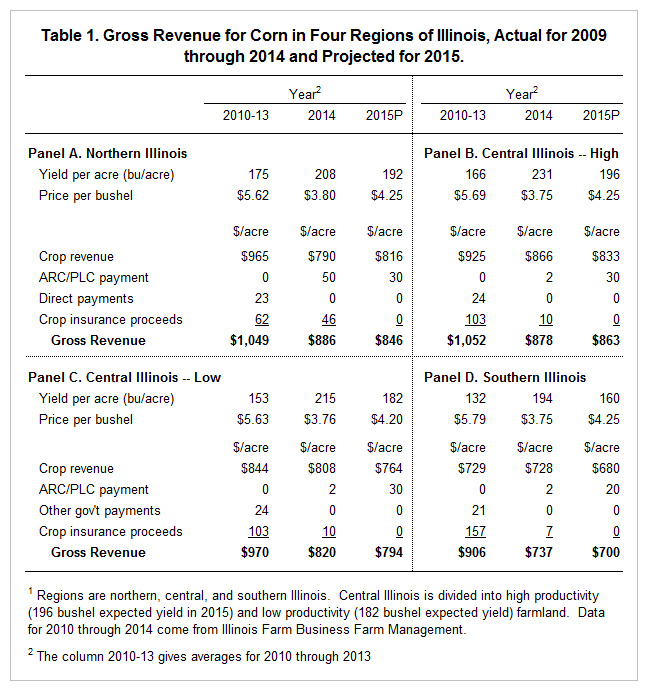 Panels A through D in Table 1 show gross revenues for four regions of Illinois: Northern, Central – High, Central – Low and Southern Illinois. Central Illinois is divided into two categories based on land productivity: Central – High has an expected corn yield of 196 bushels per acre in 2015 while Central – Low has a 182 expected yield. Table 1 shows actual results from 2010 to 2014. These actuals come from summaries of farms enrolled in Illinois Farm Business Farm Management (FBFM), supplemented with data from the Risk Management Agency on crop insurance payments and estimates of ARC/PLC payments for 2014.

Yields were exceptional over much of Illinois in 2014. As a result, the 2015 yields — based on trend yields — are projected to be lower than 2014 yields. Offsetting lower projected yields are higher projected prices. The projected 2015 corn price used in Table 1 is $4.25 per bushel. This projected price is based on an analysis of price implications resulting from 2015-16 corn balance sheet (see April 16th farmdoc daily article).

For 2015, ARC/PLC payments are projected to occur in Illinois. A $4.25 price is well above the $3.70 reference price, resulting in no PLC payments. ARC payments are projected to occur in all regions of Illinois in 2015. Payments are estimated at $30 per acre in Northern and Central Illinois and $20 per acre in Southern Illinois. However, a $4.25 price could result in significantly lower ARC payments than those shown in Table 1In many counties, a $4.25 market year average price would result in no ARC payments, particularly if county yields are above average.