The USDA’s March 31, 2015 Prospective Plantings report indicated that 12.969 million acres of spring wheat other than durum would be seeded this year. That is 56,000 fewer acres than seeded last year. The size of the 2015 spring wheat crop will depend on the magnitude of harvested acres and the average yield. A forecast of harvested acreage will be revealed in USDA’s June 30 Acreage report. 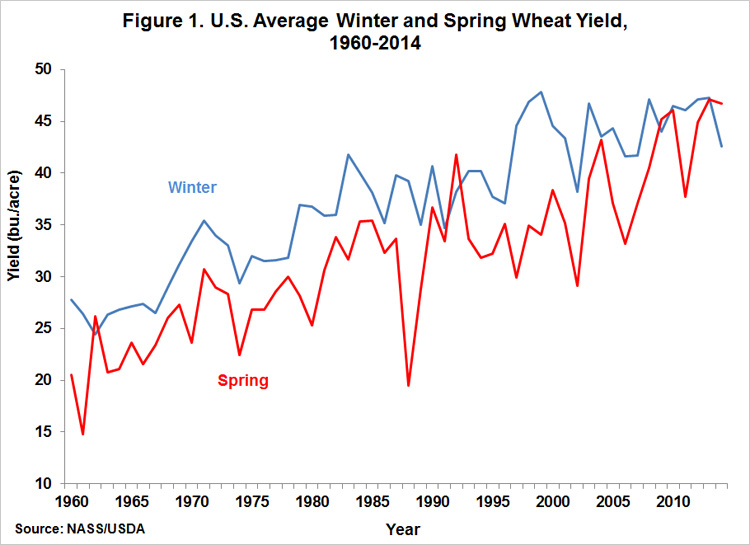 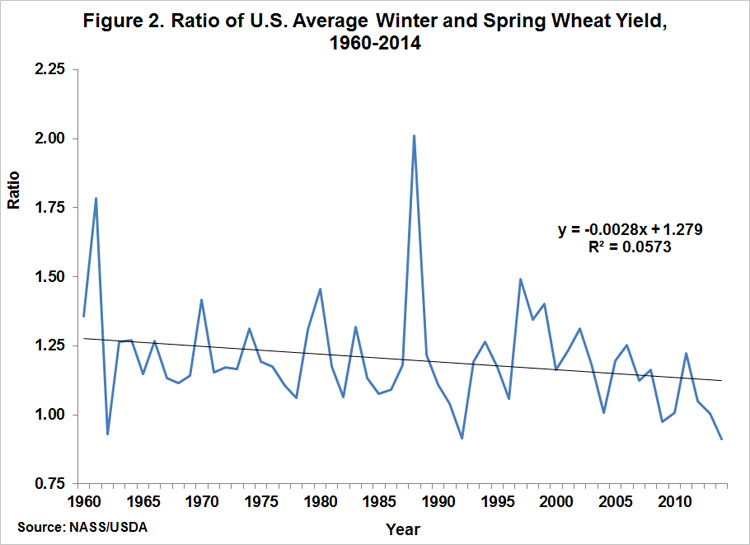 As shown in Figure 3, U.S. average spring yields have trended higher since 1960. Note that the spring wheat yield used here is actually designated by the USDA as “other spring wheat,” and it is a weighted-average of the different types of spring wheat grown in the U.S. except durum. By a wide margin, the largest class of spring wheat in the U.S. is hard red spring. A linear trend of actual average yields over that period explains 73.7 percent of the variation in annual average yields and estimates that yields have increased at a rate of 0.4034 bushels per acre per year. The trend increase has been about 0.02 bushels higher than the trend increase in winter wheat yields. An alternative to a linear trend that is sometimes considered is the log-linear trend model (take the natural logarithm of yield before regressing on a time index), but this model also implies that the range of trend yield deviations in bushels should expand across time which clearly has not happen. It should also be noted that an important property of the linear trend model is that the percentage change in trend yields declines over time as the same bushel increase in trend yield is divided by a larger and larger base. This is consistent with the history of U.S. average spring wheat yields since 1960. The linear trend of actual yields explains a smaller portion of the annual variation in yields than is the case for corn (88.6 percent), soybeans (88.4 percent), and winter wheat (84.2 percent). 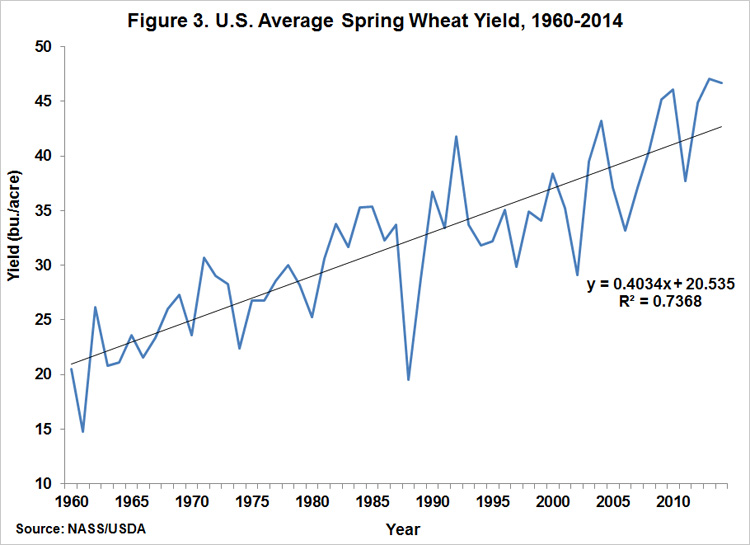 Figure 4 shows the deviations of actual yields from the estimated 1960-2014 trend in yield. Obviously, there has been substantial deviation from the trend yield in individual years. Over the 55-year period, the average yield was above the trend yield in 49 percent of the years and below the trend in 51 percent of the years, similar to the split found for winter wheat (51/49), but a much more even split than found for corn (58/42) and soybeans (60/40). Since all deviations from a linear trend must sum to zero, this means that in the 49 percent of years with an above trend spring wheat yield the deviations were on average about equal the deviations in the 51 percent of years when yields were below trend. Specifically, the average deviation above trend was 3.0 bushels while the average deviation below trend was 2.9 bushels. The largest deviation above trend was 8.0 bushels (1992) while the largest deviation below trend was 12.7 bushels (1988). The frequency and magnitude of positive and negative yield deviations for spring wheat have been markedly different than for corn and soybeans. The pattern of deviations of spring wheat yields from trend is similar to that for winter wheat and does not reveal the asymmetric impact of good (normal) weather and poor weather that was found for corn and soybeans (except in 1988). The frequency of good (normal) and poor weather conditions for wheat production appears to have been more evenly divided than has been the case for corn and soybeans. 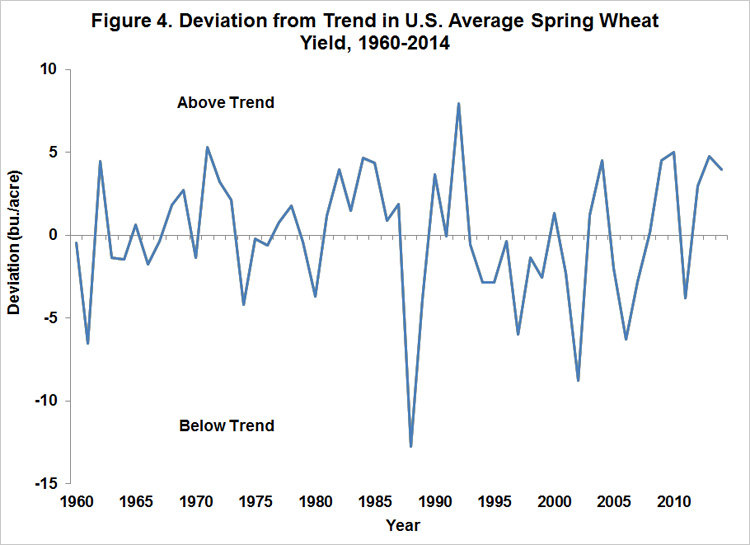 The 49/51 split between above and below trend yields discussed above is a general statement that applies to any year in the sample. A different, but related, question is whether there is a marked correlation between deviations from year-to-year. In other words, is there a tendency towards continuation or reversal of deviations? Figure 5 shows that there is a very small positive correlation (0.0171) between the yield deviation in the previous year and the current year (correlations can vary between -1 and +1, with zero indicating no relationship). The magnitude of the correlation is smaller than for winter wheat (0.0956) and similar to that found for corn (-0.0159) and soybeans (-0.002). There is a very slight tendency for a positive spring wheat yield deviation to be followed by a positive deviation in the next year and vice versa. 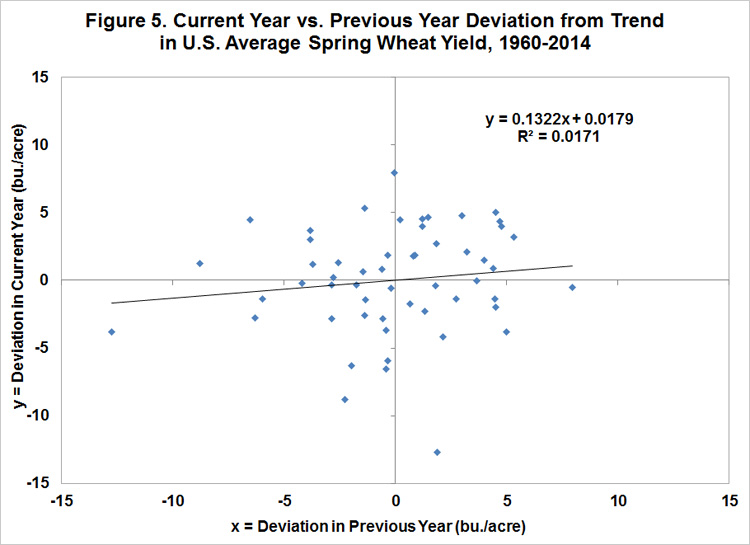 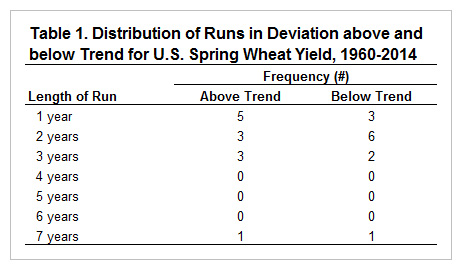 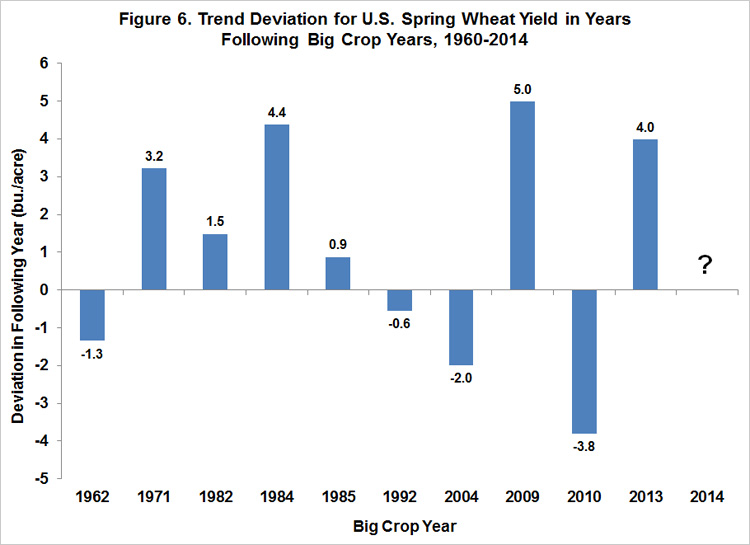 The analysis of spring wheat yields presented to this point reveals considerable diversity in yield patterns since 1960, most clearly depicted in Figure 4. Average yields have shown large positive and negative deviations from trend, the duration of consecutive years with above- or below-trend yields has varied considerably, the correlation between yield deviations in consecutive years is relatively small, and the pattern of yield deviations following years of very large positive deviations (like 2014) is quite mixed. This diverse and largely random set of patterns suggests that the most objective early-season yield expectation for any year, including 2015, should be based on the trend of actual yields.

We maintain that current 2015 spring wheat yield expectations should be based on the longest sample of data with a stable trend yield component and argue that a linear trend over 1960-2014 best meets this criterion. The 2015 “unconditional” trend yield based on the 1960-2014 linear trend is 43.1 bushels. In our recent farmdoc daily articles on corn and soybean trend yields (February 26, 2015; March 19, 2015), we argued that this methodology actually results in a slight under-estimate of the true trend yield due to the asymmetric effect of weather on actual yields. That is, poor weather reduces corn and soybean yields more than good weather improves yields so that the impact of technology (trend) is under-estimated due to sharp reductions in yield from poor weather years. Consequently, we used our previous research on crop weather models to adjust for the downward bias in unconditional corn and soybean trend yield estimates associated with the asymmetric effect of weather on yields. We did not make a similar bias adjustment to the unconditional 2015 winter wheat trend yield estimate because: i) the trend deviations in winter wheat yield did not appear to exhibit the type of asymmetric good versus bad weather effect that is so evident in corn and soybeans, ii) we had not developed the crop weather models for winter wheat needed to make the bias adjustment. For the same reasons, we do not make a bias adjustment to the 2015 spring wheat trend yield estimate.

It is clear that alternative trend yield projections are plausible, depending on the sample period used and the functional form of the trend model and that substantial yield risk exists when considering trend projections. We argue that the distribution of expected yields around the trend should reflect the distribution of actual annual deviations from trend yield for the period 1960 through 2014. The resulting distribution of likely yields, with a mean (expected value) of 43.1 bushels, is shown in Figure 7. Note that each interval refers to the frequency of yields greater than the previous interval yield but less than or equal to the indicated yield level. For example, the 40 bushel interval indicates there is a 7.3 percent chance of yields being more than 38 bushels and less than or equal to 40 bushels. The outcomes range from a low of 30.4 bushels to a high of 51.1 bushels, with a higher probability of a below-trend yield than an above-trend yield. The historic yield distribution suggests a 9.1 percent probability of an average yield equal or below 38 bushels and a 5.5 percent probability of an average yield above 48 bushels. The middle 50 percent of the expected yield distribution is 41 to 46 bushels. 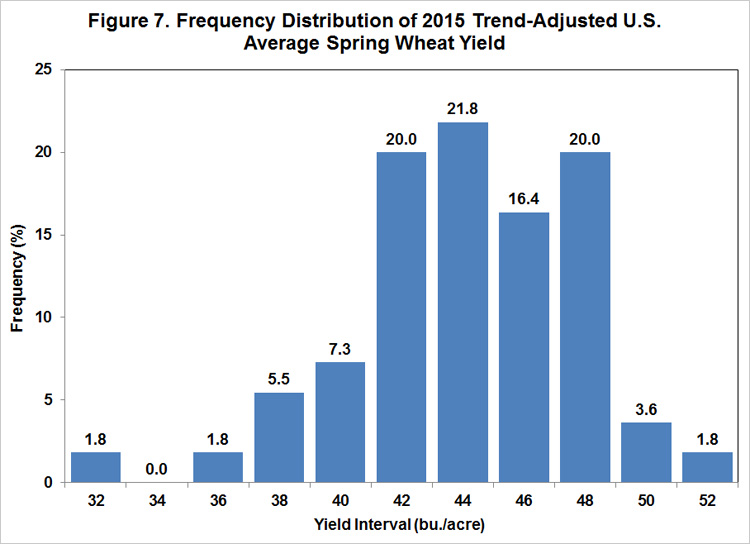 The U.S. average spring wheat yield since 1960 has shown: i) large positive and negative deviations from trend, ii) the duration of consecutive years with above or below trend yields has varied considerably, iii) the correlation between yield deviations in consecutive years is relatively small, and iv) the pattern of yield deviations following years of very large positive deviations (like 2014) is quite mixed. This diverse and largely random set of patterns suggests that the most objective early-season yield expectation for any year, including 2015, should be based on the trend of actual yields. A range of trend yield projections is plausible depending on the sample period and the functional form of the trend model. Given the various alternatives, we maintain that yield expectations should be based on the longest sample of data with a stable trend yield component and argue that a linear trend over 1960-2014 best meets this criterion. The best linear fit of actual yields in the U.S. from 1960 through 2014 results in a trend yield projection for 2015 of 43.1 bushels per acre. Regardless of which trend projection is considered, there is, as usual, large risk of deviations from the projection. For example, we estimate there is roughly a one-in-eleven chance of the U.S. average spring wheat yield falling below 38 bushels and a one-in-nineteen chance of yield being above 48 bushels.

Irwin, S., and D. Good. "Forming Expectations for the 2015 U.S. Average Winter Wheat Yield: What Does History Teach Us?" farmdoc daily (5):56, Department of Agricultural and Consumer Economics, University of Illinois at Urbana-Champaign, March 26, 2015.

Irwin, S., and D. Good. "Forming Expectations for the 2015 U.S. Average Corn Yield: What Does History Teach Us?" farmdoc daily (5):36, Department of Agricultural and Consumer Economics, University of Illinois at Urbana-Champaign, February 26, 2015.