The release of the USDA’s Prospective Plantings report on March 31 initiated the annual ritual of trying to account for all the U.S. crop acreage. The primary purpose of that exercise is to anticipate potential differences between planting intentions and actual plantings, both for all crops and for individual crops. We outlined the acreage accounting process in two previous farmdoc daily articles last spring (April 4, 2014; April 9, 2014). Our analysis showed that it is very difficult to explain the variation in total acreage of crop land from year-to-year. Even so, acreage accounting based on planting intentions estimates may provide some insight into how the final estimate of crop acreage may differ from intentions, at least directionally. Last year, for example, we concluded that planted acreage of principal crops might turn out to be 2 to 4 million acres larger than intentions. The final estimate of planted acreage was only 0.9 million larger than intentions. The increase may have been larger if not for more than expected prevented plantings. In this article, we expand and update the acreage accounting process of last year.

The logical starting point for the analysis is the total acreage planted to principal crops in the U.S. Principal crops include planted acres of corn, sorghum, oats, barley, rye, winter wheat, durum wheat, other spring wheat, rice, soybeans, peanuts, sunflower, cotton, dry edible beans, potatoes, canola, proso millet, and sugarbeets as well as harvested acreage for hay, tobacco, and sugarcane. The total should also include double-cropped acres and unharvested acreage of small grains planted as cover crops. The acreage data based on these definitions for 2007-2015 is presented in Table 1. The estimates for 2007-2014 are from the USDA’s Crop Production Annual Summary report, as later revised. The estimate of this overall total for 2015 from the just released Prospective Plantings report is 324.8 million acres (Figure 1). The estimate is based on the USDA’s March Agricultural Survey of approximately 84,000 producers that was conducted between February 27 and March 18, 2015. 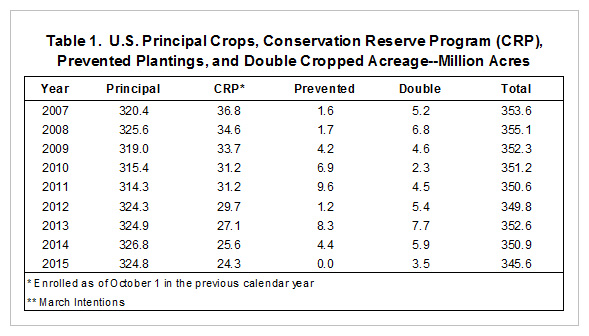 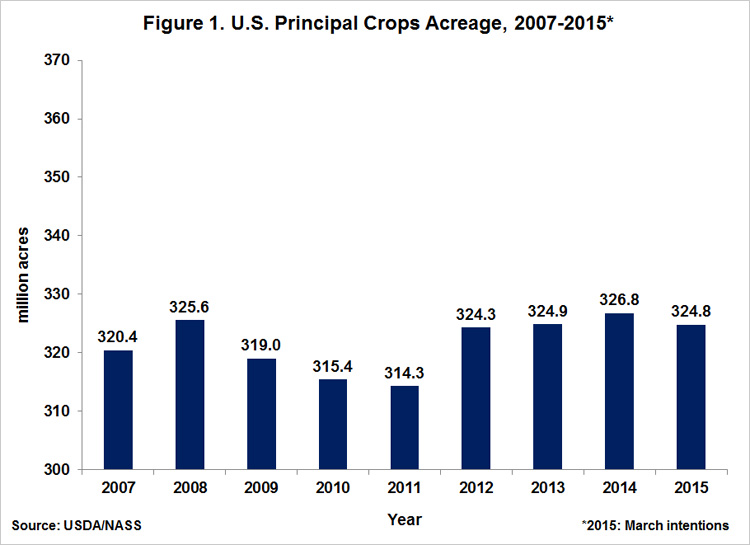 The second step in the acreage accounting process is to add the acreage enrolled in the Conservation Reserve Program (CRP), as reported by the USDA’s Farm Service Agency (FSA). All enrolled land was presumably in crop production in some previous time period and land for which contracts are not renewed is presumably suitable for crop production the following year. The total of planted acreage of principal crops and CRP enrollment as of October 1 in the previous calendar year is shown in Figure 2, with 2015 planted acreage based on March intentions. That total for 2015 is 3.3 million acres less than last year’s total, 11.1 million less than the recent high in 2008, 3.6 million above the recent low in 2011, and 3.5 million less than the average of the previous eight years. 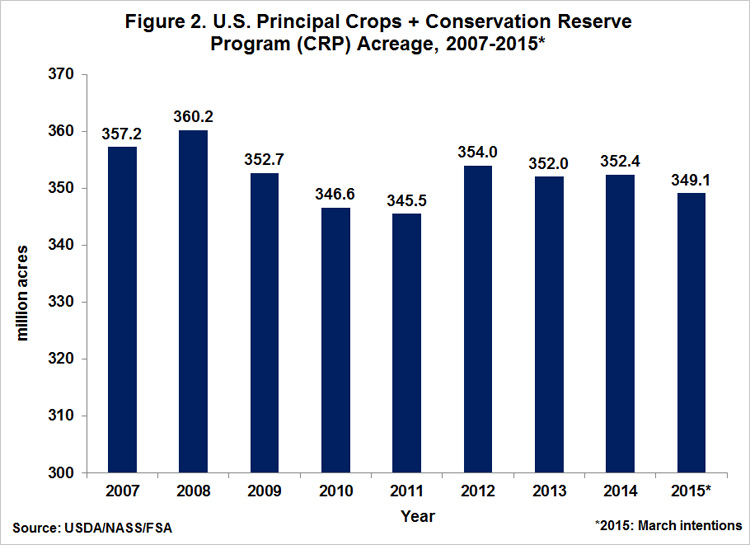 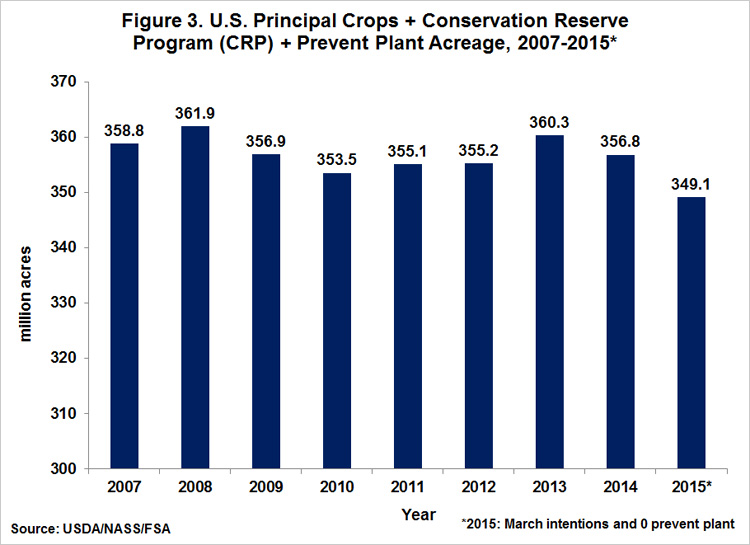 The final step to the acreage accounting process, which is an addition to our previous analysis, is to account for double-cropped acreage. Since double-cropping does not change the crop land base, variation in the amount of double-cropped acreage from year to year may explain some of the variation in the total acreage as presented in Figure 3. The predominant double-cropping is soybeans following the winter wheat harvest. While the USDA does not make official estimates of double-cropping of soybeans, some data on the percentage of soybean acres which are planted following another crop are provided for selected states and the United States in the annual June Acreage report. The USDA describes those estimates as follows:

“Data as obtained from area frame samples. These data do not represent official estimates of the Agricultural Statistics Board but provide raw data as obtained from survey respondents. The purpose of these data is to portray trends in soybean production practices” [NASS Acreage report, June 30, 2014, pg. 16]. 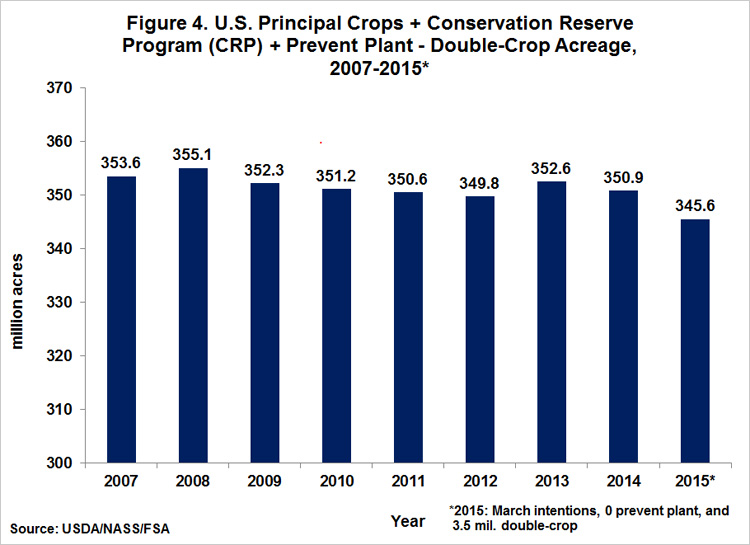 Two issues stem from the analysis of the recent large annual variation in crop land totals. First is how to explain the variation and second is to draw implications, if any, for the likely level of actual planted acreage in 2015. As for the first issue, a number of factors may contribute to the variation in estimates of total crop land from year to year. One factor might be the impact of price levels on total acreage planted. We have not done a formal analysis of long-term relationships between crop price levels and total acreage, but recent observations suggest there is some impact of the level and direction of new crop prices in the run-up to planting and the magnitude of planted acreage of principal crops plus prevented acres. High and/or increasing prices tend to result in larger acreage and vice versa. This year, the lower level of prices of some commodities prior to the survey for March planting intentions may have discouraged crop planting intentions in some areas.

A second factor that may contribute to annual variation is some “noise” in non-principal crop acreage. The CRP acreage used here, for example, is the acreage enrolled in the program as of October 1 in the year prior to spring planting. Actual CRP enrollment may have differed slightly from those estimates in some years. Additionally, planted acreage of non-principal crops is not included in the planted acreage shown in Table 1. Acreage of those crops varies some from year-to-year, which could account for a very small part of the differences in total planted acreage from year-to-year. Finally, the total may vary from year-to-year due to issues associated with the estimates of prevented planted acres. Those estimates reflect mandated self-reporting by producers enrolled in federal programs and should be a near-census estimate, but the data may well reflect some level of non-sampling errors. The issue could be similar to when annual acreage reduction programs were in place. In some years when those programs were in place, the total of planted and set-aside acres did not seem completely logical.

The third and most likely factor that explains a significant portion of the annual variation in the total crop land acres is that of sampling error associated with the estimates of planted acreage. The USDA’s National Agricultural Statistics Service included the following statements relative to sampling error in the March 31, 2015 Prospective Plantings report:

“The acreage estimates in this report are based primarily on surveys conducted during the first two weeks of March. The March Agricultural Survey is a probability survey that includes a sample of over 84,000 farm operators selected from a list of producers that ensures all operations in the United States have a chance to be selected.”

“The survey used to make acreage estimates is subject to sampling and non-sampling errors that are common to all surveys. Sampling errors represent the variability between estimates that would result if many different samples were surveyed at the same time. Sampling errors for major crops are generally between 1.0 and 3.0 percent, but they cannot be applied directly to the acreage published in this report to determine confidence intervals because the official estimates represent a composite of information from more than a single source.”

Similar statements are included in the USDA’s June Acreage reports. Since sampling errors of some unknown magnitude may be reflected in estimates of planting intentions, the true value may differ from the point estimates that are published. With a sampling error of as little as two percent, for example, the 95 percent confidence interval for the estimate of plantings and planting intentions for principal crops would be 6.0 to 6.5 million acres.

The presence of sampling errors in the estimates of planted acreage and planting intentions means that one should be cautious in drawing conclusions when comparing acreage in one year to acreage in the previous year(s). It is not uncommon for market analysts to treat last year’s estimate of planted acreage and this year’s estimate of planting intentions as being completely free of sampling errors. It is likely that the true difference between those observations is larger or smaller than implied by the point estimates.

As for implications for 2015 acreage, the presence of sampling errors means that current crop land calculations probably should be viewed in relation to an average of previous year totals. For example, the average of total crop land in Table 1 over 2007-2014 is 352 million acres, 6.4 million acres higher than the projected total for 2015. An even more conservative benchmark is to consider the lowest total during 2007-2014, which was 349.8 million acres in 2012. That is still 4.2 million acres above the 2015 total calculated here.

There was not much reaction to the USDA’s March estimates for 2015 showing intentions to plant two million fewer acres of principal crops than were planted in 2014. Some decline was expected due to lower commodity prices than experienced a year earlier. However, the calculation of likely total crop land in 2015 based on March planting intentions, current CRP enrollment, zero prevented plantings, and small double-cropped acres of soybeans is surprisingly low. The total is 6.4 million less than the average of the previous eight years and 4.2 million acres below the lowest total during that period. This analysis suggests that one might anticipate slightly larger estimates of planted acreage in June, particularly if conditions point to minimal prevented planted acreage. One needs to be cautious in reaching such a conclusion, however, primarily due to the sampling variability that is inherent in the planted acreage estimates. If acreage estimates for principal crops do increase in the future, we expect the magnitude to be relatively small, in the range of 1 to 3 million acres, with the increase likely to be for soybean acreage.

Good, D. and S. Irwin. "The Relationship between Planting Intentions, Actual Plantings, and Prevented Plantings over 2007-2013." farmdoc daily (4):64, Department of Agricultural and Consumer Economics, University of Illinois at Urbana-Champaign, April 9, 2014.

Good, D. and S. Irwin. "Are There Acres Missing from the USDA's Prospective Plantings Report?" farmdoc daily (4):61, Department of Agricultural and Consumer Economics, University of Illinois at Urbana-Champaign, April 4, 2014.