An often overlooked component of MPP-Dairy is that it creates a new index by which USDA will measure the average feed costs associated with producing 100 pounds of milk. As part of this measurement USDA specifies the quantity of feed ingredients used in a generic ration for feeding milking cows, hospital cows, dry cows, and replacement heifers (National Milk Producers Federation, 2010). The MPP-Dairy feed ration consists of 1.0728 bushel of corn, 0.00735 tons of soybean meal, and 0.0137 ton of alfalfa hay per 100 pounds of milk produced. Actual feed ingredients and ration quantities likely differ from the MPP-Dairy ration. As evidence, USDA’s Risk Management Agency identifies a number of alternative dairy feed ingredients based on protein and energy content per ton (USDA Risk Management Agency, 2010).

Not including alternative feed ingredients or ration allocations, an analysis of USDA Crop Production and Milk Production statistics reveals that two-thirds of U.S. states do not produce enough corn, soybeans, or alfalfa hay to fulfill the feed requirements of MPP-Dairy. In order to provide some perspective on the source of MPP-Dairy feed ingredients relative to the concentration of U.S. milk production, today’s article uses 2014-15 marketing year crop production to map the deficit (or surplus) of corn, soybeans, and alfalfa hay relative to the MPP-Dairy feed ration.[1] For corn and soybeans the marketing year runs from September through August, while alfalfa cutting can occur several times per year depending on climate conditions, plant maturity, and calendar date.[2] 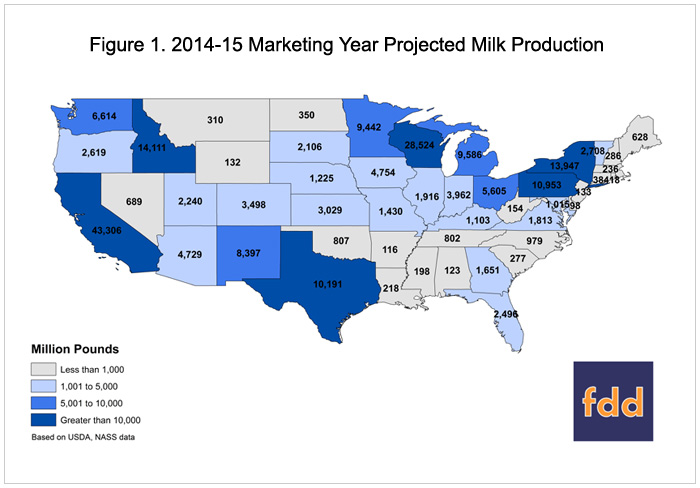 As evidenced by the USDA Crop Production report and based on the MPP-Dairy ration, many states do not produce enough livestock feed to satisfy the demands of their state-level milk production. For example, California requires 465 million bushels of corn to produce 43 billion pounds of milk. However, during the 2014-15 marketing year California produced only 16 million bushels of corn grain, approximately 3 percent of the total MPP-Dairy amount required. This leaves California 449 million bushels short of the amount of corn needed to meet the MPP-Dairy ration, Figure 2. For states deficit in corn production, these bushels must be shipped into the state or offset through modifications in the feed ration. 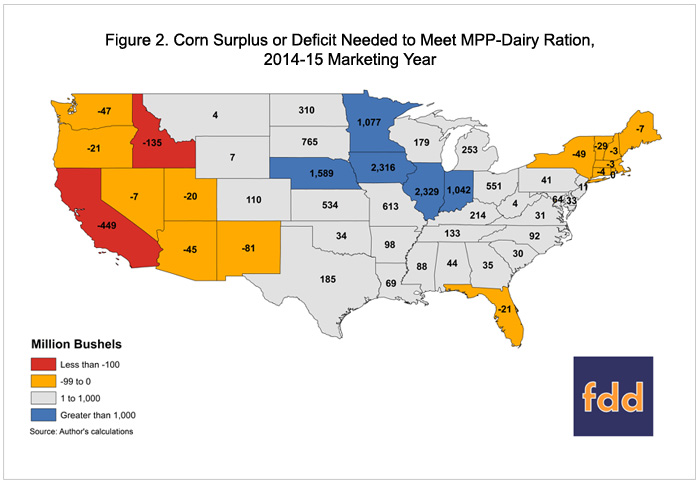 Similar analyses can be done for soybean meal and alfalfa hay. As demonstrated in Figure 3, a similar pattern to the one observed for corn emerges for soybeans in that Western states are deficit soybean producing regions relative to the MPP-Dairy ration.[3] This is partially to be expected as states such as Illinois, Indiana, and Iowa have competitive advantages for crop production, while states such as California, Idaho, and Texas generally enjoy greater economies of scale in milk production. 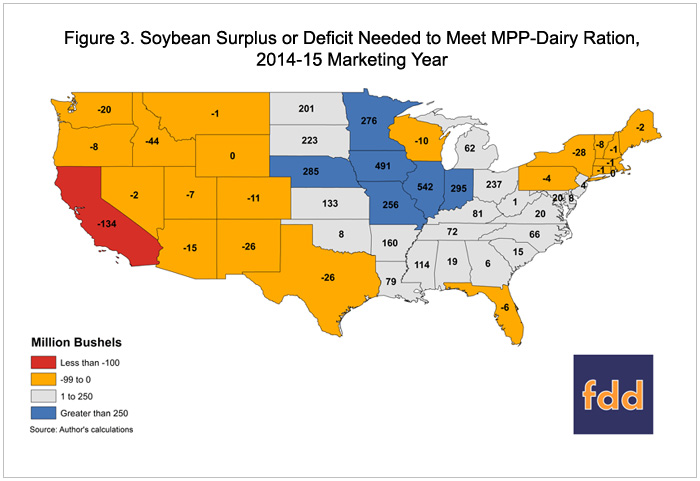 The leading states for alfalfa hay production are California, South Dakota, and Idaho. These and other states in the Upper Midwest and Western portions of the U.S. account for the majority of the alfalfa production. Accordingly, except for California, many of these states are surplus alfalfa producing regions. Deficit regions for alfalfa hay production include large portions of Southern U.S. and the Northeast. New York is the largest deficit state at 1.2 million tons of alfalfa. 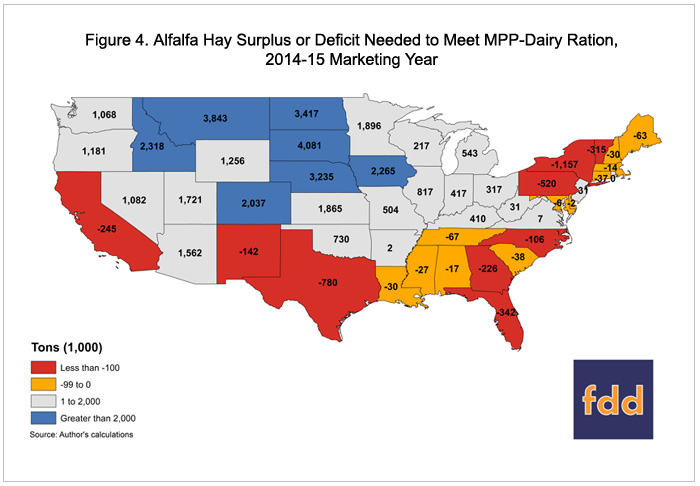 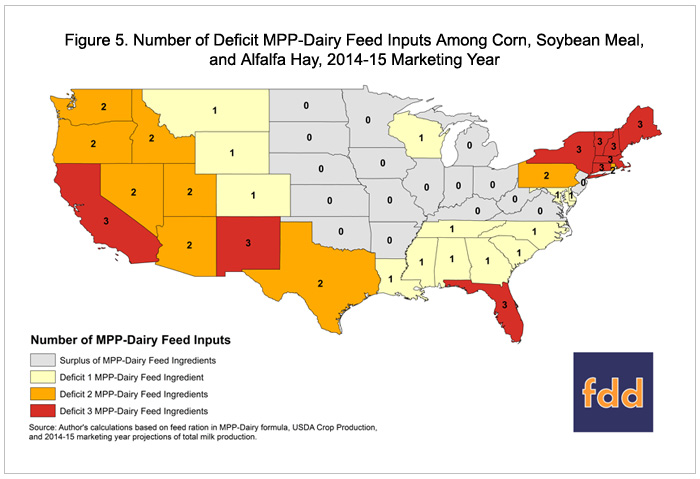 This shortage of MPP-Dairy ration ingredients is not a recent development. To compliment this analysis, supplemental data online shows state-level ration requirements for MPP-Dairy using 2006-07 to 2013-14 marketing year data: Tableau Public. States such as California, Idaho, New York, Texas, and even Wisconsin are consistently short in the production of MPP-Dairy livestock feed ingredients.

Financially, the need to import livestock feed can represent a significant portion of total feed costs. USDA’s Milk Cost-of-Production Estimates indicated that on average purchased feed costs represented more than 50 percent of U.S. dairy farmer total feed costs. Obviously, for states appreciably deficit in feed production this percentage is even greater. Using California as an example, given the low levels of corn and soybean production, on average for the current marketing year 74 percent of the MPP-Dairy feed ration must be purchased and imported into the state. With marketing year average prices for corn at $3.70 per bushel and soybean meal at $370 per ton reported in USDA’s April 9 World Agricultural Supply and Demand Estimates, for California these MPP-Dairy purchased feed costs represent nearly $3 billion dollars (not including local basis).

The observation that principle milk producing regions are (and have historically been) feed deficit was not unanticipated. In fact, the impressive milk production growth rates in states like California, Idaho, and Texas was largely facilitated by land availability for large-scale dairy operations and the low costs of sourcing feed ingredients. Transporting livestock feed is a cost-effective way of outsourcing the production of water-intensive row crops. Given that one acre of corn can require as much as 670 thousand gallons of water this pattern is unlikely to reverse. Instead, it is more likely that weather related shocks to the feed supply will continue to negatively impact the profitability of these dairy operations. Even farmers more dependent on home-grown feed are exposed to supply shocks in livestock feed (e.g. 2012). Consequently, as demonstrated in this article, the deficit of MPP-Dairy feed ingredients in several milk producing regions underscores the importance of farmers utilizing income-based risk management tools.

[3] Figure 4 does not reflect soybean crushing locations or volumes.