In our previous farmdoc daily posts “The Dairy Safety Net Debate of 2013: Parts I and II” (see here and here) we offered an independent analysis of the dairy margin protection programs put forth and passed by the U.S. House of Representatives and the U.S. Senate. This research demonstrated that a safety net program encompassing both the milk price and the feed price in the form of an income-over-feed-cost margin would succeed in providing need financial relief to dairy farmers during times of low milk production margins. We also identified and discussed three significant issues: (i) adverse gaming, (ii) functional equity of dairy market stabilization, (iii) and the distribution of program benefits.

Since our last post The Agricultural Act of 2014 (here) was passed by both Houses of Congress and signed into law by President Obama on February 7, 2014. In today’s post we will demonstrate how The Agricultural Act of 2014, through the Margin Protection Program for Dairy Producers, has partially addressed our earlier concerns by (1) excluding the dairy market stabilization program and (2) altering the premium schedule for both small and large dairies. First, we review the margin protection provisions in the new law, and second we examine to what extent adverse gaming incentives and distributional effects may still exist. In addressing these issues we will demonstrate that the distribution of program benefits no longer follows closely the distribution of milk production and is more aligned with the benefit distribution of the Milk Income Loss Contract (MILC) program. We will also explain that adverse gaming incentives still exist, and in the absence of formal rate making procedures can be significantly reduced by instituting a gap between the sign-up date and the beginning of the coverage period.

What is the Margin Protection Program for Dairy Producers?

The dairy title of The Agricultural Act of 2014 would repeal a number of existing dairy safety net programs and replace them with two new programs: Margin Protection Program for Dairy Producers and a Dairy Product Donation Program. Both programs will become effective by September 1, 2014. The focus of this post is the margin protection program to replace MILC. The margin protection program is a voluntary program which pays indemnities when the average difference between the USDA national All-Milk price and a ration index reflecting the national cost of feeding dairy animals falls below a user selected coverage level. Over the 2000-2013 years the dairy production margin has ranged from a low of $2.25 to a high of $14.65 and averaged $8.26 per hundredweight (cwt). Margin protection is available from $4.00 to $8.00 per cwt in 50¢ increments and offers protection on up to 97% of the historical average margin.  Enrolled producers may receive coverage on 25-90% of their milk production history.  The production history is to be determined at sign-up in the first year of the program and is defined as the highest level of annual milk production during 2011, 2012, or 2013 calendar years. In subsequent years a farm’s production history will be updated by USDA to reflect only the increase in national average milk production. Individual milk production base growth above the national average will not be reflected in the updated production base.

In order to participate in the margin protection program and receive no cost $4.00 coverage dairy operations must annually pay an administrative fee of $100. Additional margin protection (strike price) on levels above $4.00 per cwt can be selected by a participating dairy at supplementary costs with premium rates depending on a farm’s production history. Premiums range from $0.01 for $4.50 coverage to as high as $1.36 for $8.00 coverage.  The premium schedule is fixed for the life of the Farm Bill, but premium discounts of 25% are specified for the 2014 and 2015 calendar years for all but the $8.00 level. For a more detailed discussion of the specific dairy title provisions of the new 2014 Farm Bill see here.

Revisiting the Distribution of Expected Benefits

Contrary to the existing MILC safety net program for dairy producers, the margin protection program does not include adjusted gross income limitations or fixed caps on production and therefore on the magnitude of potential benefits.  In the final compromise the margin protection program was modified to be more accommodating to small and medium sized dairies by reducing the premium rates by as much as 50% for the first four million pounds of production history. Finally, the premium rates for production history in excess of 4 million pounds were increased by 20¢ to 30¢ for the $7.00 to $8.00 coverage options. Using average milk production of 21,806 lbs per cow per year the 4 million pound cap represents a 183 cow dairy, and just shy of 85% of U.S. dairies are below this threshold.

To evaluate the distribution of margin protection benefits following these premium adjustments, and using data on milk production provided by USDA, we compared simulation results of MILC, Dairy Freedom Act, Dairy Security Act, and the Agricultural Act of 2014, Figure 1.Under MILC, we estimated that dairies with less than 100 cows (approximately 70% of farms) account for about 39% of net expected benefits and dairies over 1,000 cows (3% of farms) account for 9% of net expected benefits. Under the Dairy Freedom and Security Acts we projected that farms over 1,000 cows would account for 36% of benefits during low margin outcomes (see here). Now, under the margin protection program in the Agricultural Act of 2014, we find that the distribution of net expected benefits closely aligns with those simulated under MILC. Farms with fewer than 100 cows would continue to receive approximately 38% of the expected benefits, and farms with over 1,000 cows would account for approximately 15% of benefits during low margin outcomes. For larger dairies this allocation represents an improvement over MILC considering that not only does the relative proportion of benefits increase (9% to 15%) but at the same time total outlays are also anticipated to be higher than MILC given the lack of payment limitations or hard eligibility constraints. 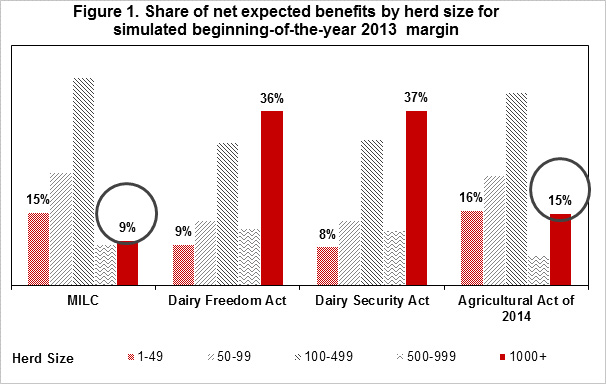 Through the altered premium structure, and given 2013 expected margins, the distribution of expected benefits no longer mirror the distribution of milk production and instead provide more coverage on a per cwt basis to smaller dairy operations. For example, during the simulated 2013 margins the average net payment for farms below 100 cows was $0.80 per cwt under $7.50 coverage.  Meanwhile, for the herds with 1,000+ head the average net payment was only $0.14 per cwt under $6.50 coverage. The difference in per cwt net payments is due to the higher premiums rates applied to the largest dairy operations. Thus, by design the per cwt benefits are higher for small producers by means of the premium reductions and discounts but also due to higher premium rates effectively deterring participation at higher coverage levels for the largest dairy operations.

Only when the margin coverage levels of $7.00 and above are expected to be deeply “in-the-money” would a larger producer find it financially beneficial to purchase such protection. Under such a scenario, when margins are catastrophically low as was the case in 2009, and using data provided by USDA, we found indemnities with $8.00 coverage could exceed $6 million dollars per farm for some of the nation’s largest dairymen. When factoring in participation costs net payments were over $3 million dollars for some of the larger dairies in the simulation. Additionally over 10% of the 1,072 dairies in the 1,000+ head category had net payments above $1 million dollars given the 2009 margin simulation. Thus, we conclude that only when higher coverage levels are deep in-the-money will payments per cwt be more consistent across participating farm sizes and result in the distribution of net benefits following closely to the distribution of milk production.

As an example, consider in Figure 2 the expected production margins at the beginning of 2009, the beginning of 2014, and in October 2008 for the 2009 calendar year. Beginning-of-the-year 2009 expected margins were deeply in-the-money such that $8.00 coverage had the highest average intrinsic value of $2.85 per cwt.  As a result, the expected benefits of participation would have warranted coverage as high as $8.00 per cwt for the largest dairy operations – despite paying premiums as high as $1.36 per cwt.  Alternatively, given favorable 2013 crop production and robust demand for dairy products, expected margins for 2014 indicate a very low probability of indemnity payments and are categorized as out-of-the-money.  Aside from opting completely out of the program, the lowest coverage level of $4.00 would have zero intrinsic value and would provide the greatest expected net benefits because it carries only the administrative fee of $100.

While a six-month gap may not be politically feasible, a 60- or 90-day gap may be acceptable given that the term structure of income over feed cost margins exhibit mean-reverting behavior.  The effect of a 90-day gap on the intrinsic value and moneyness is demonstrated in the third panel of figure 2. In this example a 90-day gap between the sign-up and coverage start date carries no intrinsic value at $8.00 and is closer to at-the-money thereby reducing the potential for strategically timed positive expected benefits of margin protection. When margin protection coverage is closer to at-the-money the adverse gaming incentives are reduced as future indemnities are less certain. As a result, the decision to participate in the program, and at what coverage level, would be made based on a farm’s appetite for risk and not on the ability to strategically game the program to one’s financial advantage.

The new dairy farm safety net program places an emphasis on protecting farm income over feed cost margins. By focusing on margins, and not milk price or countercyclical revenue support, dairy producers across the U.S. regardless of location and management style are better protected against severe downturns in the milk price, rising livestock feed prices, or a combination of both.

In today’s post we’ve demonstrated that except during times when margin coverage is deep in-the-money the distribution of program benefits will follow closely the distribution of benefits under the previous MILC program while simultaneously providing additional income support for the nation’s largest dairy operations. We also show that adverse gaming incentives still exist with the Dairy Margin Protection Program but can be mitigated by specifying an earlier sign-up date for coverage decisions, specifically we propose 60 or 90 days.

With the Agricultural Act of 2014 becoming law, the Secretary of Agriculture is provided the authority to define many of the rules by which the dairy programs will operate.  At the time this farmdoc daily article is posted many of these are not known.  As the rules and regulations become known to us we will provide more information and insight in future farmdoc daily posts and webinars.