This article is a companion to the March 13, 2015 farmdoc daily article, “Some Key Trends in the World Soybean Market.” As with the article on soybeans, objective of this article is to examine strategic consumption and production trends that underlie the current U.S. and world corn market.

The analysis starts with the 1996 crop year and ends with the 2014 crop year. The analysis revolves around comparing annual change between average consumption, production, harvested acres, and yield for the 1996-2000 and 2010-2014 periods. Use of averages for the two periods mitigates the impact of weather upon the annual change in variables of interest. The two 5-year periods bookend a period of explosive growth in U.S. corn ethanol production (see Figure 1). Sources of the data used in this article are (1) the U.S. Department of Agriculture (USDA), Foreign Agriculture Service “Production, Supply, and Distribution Online“; and (2) USDA, Economic Research Service “Feed Grains Database“. 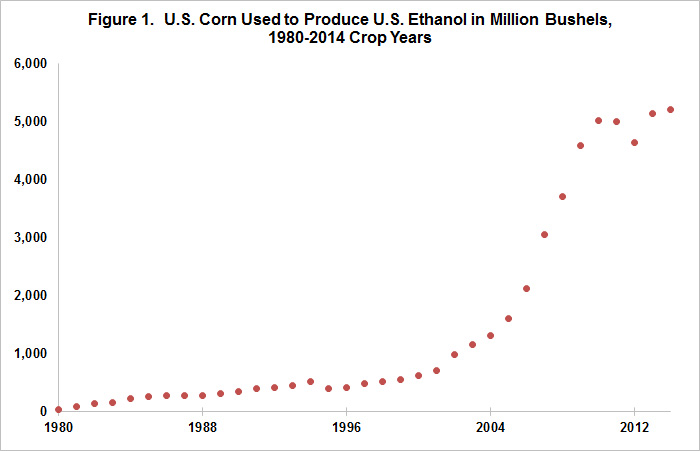 Consumption is examined by both including and excluding U.S. corn used to produce U.S. ethanol. Note that U.S. consumption includes exports of corn and that corn used to produce ethanol is reduced by 29.5% to adjust for the distillers dried grain byproduct. DDGs are largely fed to livestock. The 29.5% adjustment factor is from the Iowa State University Ethanol Profitability website.

For the world, annual growth of corn consumption declined from 891 million bushels per year to 665 million bushels per year when DDG-adjusted U.S. corn for ethanol is removed. DDG-adjusted U.S. corn for ethanol accounted for 30% of the world’s growth in corn consumption between 1996-2000 and 2010-2014. While a notable component of world consumption growth, U.S. ethanol was not the largest contributor. Feed and residual use accounted for 43% of the growth in world consumption of corn between the two periods.

Not surprisingly given their interrelationship, the annual increase in production and consumption, including ethanol, of corn are similar for both the U.S. and world (see Figures 2 and 3). Growth in production was highest for the U.S., followed closely by China, with Brazil third among the countries listed in Figure 3. Taken together, the U.S. and China accounted for 51% of the world’s increase in production between 1996-2000 and 2010-2014. Adding Brazil brings the three-county share to 63%. 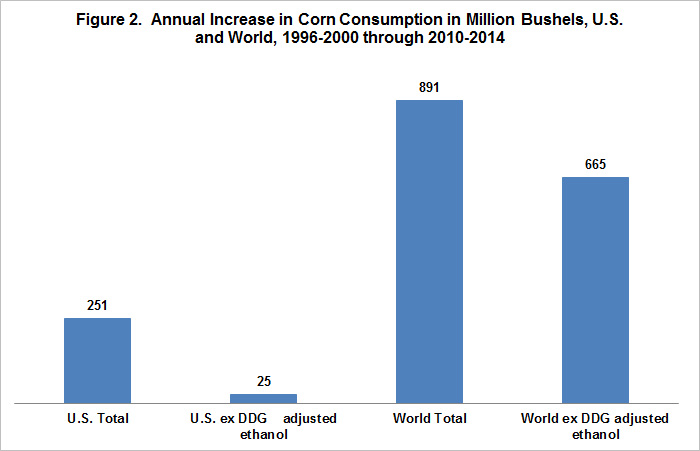 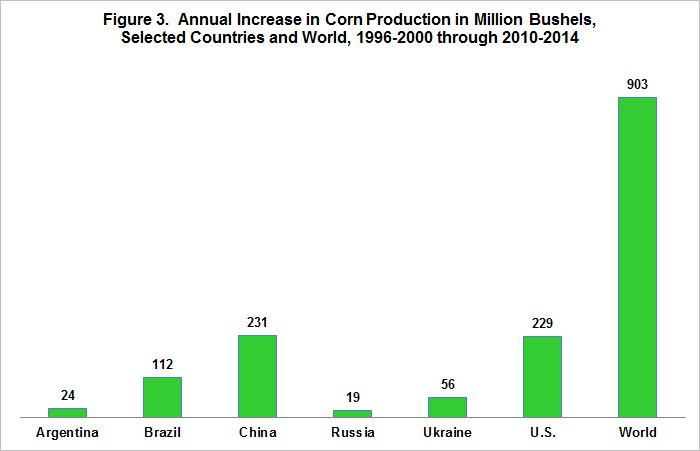 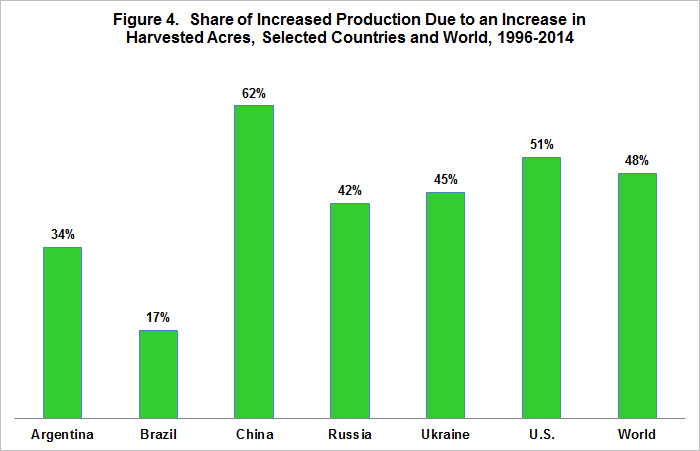