In a farmdoc daily article last week (June 3, 2015), we analyzed whether the ethanol mandates recently proposed by the EPA for 2015 and 2016 were high enough to provide a “push” for biofuels use beyond the E10 blend wall. The analysis confirmed that the proposed mandates do indeed imply pressure towards higher ethanol blends or non-ethanol biofuel, but this depends on assumptions about growth in gasoline use and ethanol inclusion rates. Relatively modest increases in the rate of growth in gasoline use and slightly higher ethanol inclusion rates largely eliminated the push above the blend wall. Our analysis assumed that the EPA targeted fixed volumes of ethanol when proposing RFS standards. There is some uncertainty on this point given that the standards are actually enforced in a fractional manner. The purpose of today’s article is to examine how estimates of the push above the blend wall implied by the 2015 and 2016 ethanol mandates change depending on whether the EPA targets a fixed volumetric or fixed fractional standard.

We begin with a brief introduction to the process used by the EPA in setting annual RFS standards. While almost all of the attention is focused on the volumetric RFS standards set by the EPA, the annual standards are actually enforced in a fractional, or percentage, fashion. In other words, obligated parties under the RFS must demonstrate that their blending of biofuels as a percentage of total firm production of transportation fuel (petroleum gasoline + petroleum diesel) meets or exceeds the percentage standard established by the EPA. The percentage standard for a given year is simply the mandated national biofuels volume divided by total national use of transportation fuel. This approach allows final mandated volumes to adjust to changes in the total production of transportation fuel after the EPA finalizes standards for a given year. So, if total production of transportation fuel for a given year is under-estimated (over-estimated) then the mandated volume of biofuels will be greater than (less than) the projected level of the mandate. This, of course, assumes that the standards are finalized before a calendar year begins, which has not always been the case in recent years.

It would certainly be logical for the EPA to target fractional standards rather than volume standards given that the mandates are enforced fractionally. However, this was not the case for 2014, the most recent data point one can use to infer EPA policy in this regard. In the first preliminary proposal for 2014 standards, released in November 2013, the EPA projected total gasoline and diesel use for 2014 at 165.27 billion gallons. The conventional ethanol mandate was set in this proposal at 13.01 billion gallons, which resulted in an (implied) fractional mandate of 7.87 percent (13.01/165.27) for conventional ethanol. In the just-released proposal, the EPA estimated total gasoline and diesel use in 2014 at 176.68 billion gallons, a substantial increase from the forecast in the first proposal. The conventional ethanol mandate was increased to 13.25 billion gallons in the latest proposal, but this resulted in the (implied) fractional mandate dropping to 7.5 percent (13.25/176.68). The EPA, in essence, “reset” the volumetric standard to a lower percentage of total transportation fuel use. If the EPA had maintained the fractional mandate from the first proposal, the conventional ethanol mandate for 2014 would have been set in the latest proposal at 13.91 billion gallons (0.0787 X 176.68) instead of 13.25 billion.

Given the wide potential swing in mandated volumes for 2014, it is not surprising that the magnitude of the push above the E10 blend wall also varies substantially. For example, there is no push in the latest conventional ethanol mandate for 2014, 13.25 billion gallons, because this volume is essentially fixed at the level of conventional ethanol use for 2014. In contrast, if the fractional ethanol mandate had been maintained from the earlier proposal at 7.87 percent and the volumetric ethanol mandate was allowed to rise to 13.91 billion gallons with the increase in total transportation fuel use, then the estimated push in 2014 would have been at least 600 million gallons. So, whether the EPA targets fixed volumetric mandates or fixed fractional mandates certainly can have important consequences for the degree of push above the E10 blend wall in the RFS standards. We investigate these consequences for the EPA’s proposed 2015 and 2016 conventional ethanol mandates in the next section.

Table 1 contains our analysis of the push contained in the EPA’s proposed ethanol mandates under assumptions in the EPA proposal and alternatives with higher gasoline and diesel use for 2015 and 2016. The format of the table is similar to Table 2 in the farmdoc daily article last week (June 3, 2015), except we added lines for diesel use (2), total gasoline and diesel use (3), and the (implied) fractional standard for conventional ethanol (12). See our article last week for details regarding assumptions about ethanol inclusion rates and the components of total ethanol use. The gap between the proposed ethanol mandates and conventional ethanol use is reported in row (11) of Table 1. Under the EPA proposal, we estimate the gap to be 322 million gallons in 2015 and 946 million gallons in 2016 (same estimates as in last week’s article). If one assumes no drawdown in RINs stocks and no change in ethanol inclusion rates, these volumes would have to be met by increasing the use of higher ethanol blends, such as E15 or E85, or increasing the use of non-ethanol biofuels, presumably biodiesel. For example, if obligated parties under the RFS determined that E85 was the least cost alternative for filling the “conventional gaps,” the total gap of 1.268 billion gallons for 2015 and 2016 would require consumption of 1.71 billion gallons of E85 (assuming E85 averages 74 percent ethanol). If obligated parties determined that biodiesel was the least cost alternative, the total gap of 1.268 billion gallons for 2015 and 2016 would require additional consumption of 823 billion gallons of biomass-based diesel (1.268/1.54). 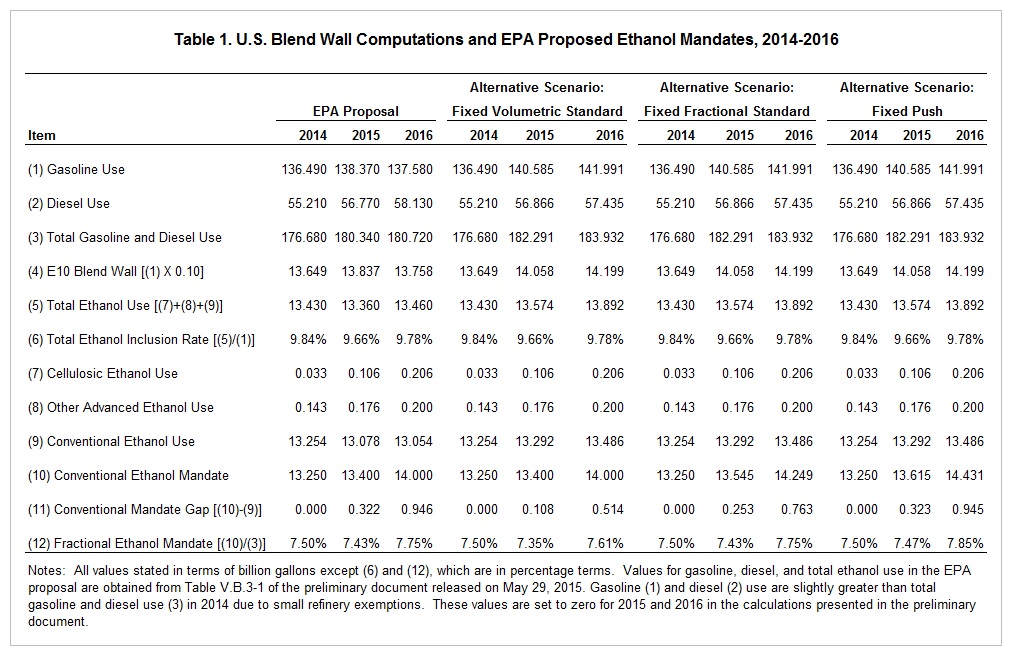 In the first alternative scenario (“Fixed Volumetric Standards”) in Table 1, the conventional ethanol mandate in 2015 and 2016 is fixed at the same level as in the EPA proposal even though projected gasoline and diesel use increases. The combination of fixed volume standards and rising overall fuel use reduces the fractional ethanol mandates in 2015 and 2016. More consequently, the push in the mandates falls by slightly more than 50 percent, from a total of 1.268 billion gallons for the two years to 0.623 billion gallons. This happens because rising gasoline use expands the E10 blend wall, which in turn reduces the amount of the conventional mandate gap.

Our analysis highlights the sensitivity of estimates of the push in conventional ethanol mandates to the policy target of EPA. It does indeed matter whether the EPA targets fixed volumetric standards, fixed fractional standards, or a fixed push in the standards. The most recent data point one can use to infer EPA intentions in this regard is 2014. Compared to the first preliminary proposal released in November 2013, the EPA, in essence, “reset” the volume for the 2014 conventional ethanol mandate to a lower percentage of total transportation fuel use in the latest proposal released on May 29, 2015. This behavior suggests the EPA leans towards a fixed volumetric standard; however, one should use considerable caution before reaching this conclusion since the May 2015 proposal was released well after calendar year 2014. The language in the most recent proposal suggests the EPA currently leans more towards a fixed fractional standard, or even a fixed push in the standard, “The standards we are proposing for 2015 and 2016 in particular would drive growth in renewable fuels by providing appropriate incentives to overcome current constraints and challenges to further the goals of Congress in establishing the RFS program.” (p.7) Given the collapse in D6 RINs prices since the release of the EPA proposal (farmdoc daily, June 3, 2015), RINs market participants appear to believe that the EPA is targeting a fixed volumetric standard and the degree of push in the conventional ethanol mandates will largely disappear if, as expected, gasoline and diesel use increases more rapidly. If these expectations are incorrect the RINs market could be setup for a major surprise when the EPA finalizes the standards for 2014-2016. The bottom-line is that the EPA needs to much more clearly communicate the target it is currently using in setting the RFS standards. Much may hang in the balance for biofuels producers, feedstock suppliers, obligated parties under the RFS, and RINs market traders.