On May 29, 2015, the EPA announced the long-awaited RFS standards for 2014, 2015 and 2016 and the biomass-based diesel volume for 2017. As outlined in a farmdoc daily article last week (May 28, 2015), market expectations for the proposal were: i) relatively large biomass-based diesel mandates; and ii) ethanol mandates above the E10 blend wall but not returning immediately to statutory levels. These expectations were reflected in RINs market prices last week. The proposal largely confirmed expectations for biomass-based diesel (“biodiesel”) but did not appear to do so for ethanol. The EPA retained the highly controversial “inadequate domestic supply” waiver arguments that first appeared in November 2013, and based on this waiver argument, proposed reductions in the renewable (ethanol) mandates for 2014-2016 compared to levels specified in the RFS statutes. Criticism from ethanol supporters was swift and severe. For example, Chip Bowling, president of the National Corn Growers Association, made this statement shortly after release of the EPA proposal, “We are evaluating our legal options for defending the law and protecting the rights of farmers and consumers. We will fight to protect and build profitable demand for corn, which is of fundamental interest to NCGA and our farmers.”

In light of this criticism, it is interesting to consider how the EPA characterizes the standards in the proposal:

“Our proposal includes volumes of renewable fuel that will require either ethanol use at levels significantly beyond the level of the E10 blendwall, or significantly greater use of non-ethanol renewable fuels than has occurred to date, depending on how the market responds to the standards we set. The standards we are proposing for 2015 and 2016 in particular would drive growth in renewable fuels by providing appropriate incentives to overcome current constraints and challenges to further the goals of Congress in establishing the RFS program. The approach we propose taking for 2015 and 2016 is forward-looking and consistent with the purpose of the statute to significantly increase the amount of renewable fuel used as transportation fuel over time, particularly renewable fuels with the lowest lifecycle GHG emissions, in the transportation fuel supply.” (p.7)

It is particularly striking that the EPA claims the proposed ethanol mandates are high enough to require levels of ethanol use beyond the E10 blend wall or the use of significantly more non-ethanol biofuels. This is the “push” that was implicit in the RFS standards when passed by the U.S. Congress. The purpose of today’s article is to examine whether this claim by the EPA is supported by the data. More specifically, we review the methodology used by the EPA to formulate the ethanol mandates for 2014-2016 and then analyze whether the proposed mandates are likely to provide incentives for ethanol use beyond the E10 blend wall or significantly higher use of non-ethanol biofuels. Our previous work on implementation of the RFS in light of the challenges presented by the E10 blend wall can be found in several farmdoc daily articles (May 24, 2012; September 26, 2012; November 2, 2012; February 13, 2013; April 10, 2013; September 5, 2013; December 4, 2013; February 19, 2015).

The RFS statutes required the EPA to establish biofuel volume requirements in four categories for each year from 2008 through 2022: cellulosic biofuel, biomass-based diesel, total advanced biofuel (which includes biomass-based diesel), and renewable fuel. The difference between the total advanced mandate and the total of the cellulosic and biodiesel mandate is referred to as the undifferentiated advanced mandate and can be satisfied by a combination of qualified advanced biofuels. Renewable biofuels is generally assumed to be corn-based ethanol but this is actually not explicitly required by the RFS legislation. Instead, corn-based ethanol has been the cheapest alternative for this category that also meets the environmental requirements of the RFS. In addition, the renewable portion of the mandate can also be satisfied with discretionary blending of advanced biofuels, so we refer to the renewable mandate as an implied mandate. Cellulosic biofuels have been in very limited supply, so the EPA has written down the cellulosic mandate to very low levels relative to statutory levels each year. The biodiesel mandate was established as a minimum of one billion gallons per year from 2012 through 2022, with larger amounts subject to EPA approval.

The fact that ethanol (renewable) mandates were reduced below statutory levels in 2014-2016 does not necessarily imply that the proposed standards will not provide incentives to push ethanol use beyond the E10 blend wall. This obviously depends on the level of the E10 blend wall relative to the mandates in each year. We focus on this important comparison in the next section.

Ethanol Mandates and the Blend Wall 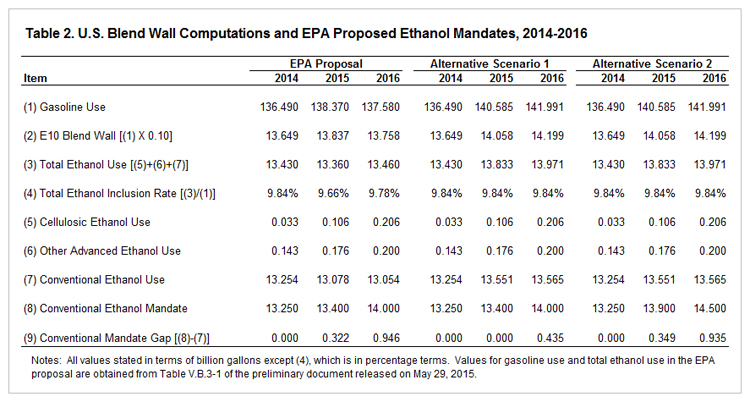 The analysis, then, indicates the 2015 and 2016 ethanol mandates in the EPA preliminary proposal do imply some push above the E10 blend wall. However, as noted above, this assumes no change in ethanol inclusion rates, which signify how close actual use of 10 percent ethanol blends is to the theoretical maximum. Comparing entries for row (2) and row (3) for the EPA proposal in Table 2, we can see that the entire conventional gap for 2015 could, in theory, be eliminated by increasing the inclusion rate to 10 percent. Almost 300 million gallons of the 946 million gallon conventional gap in 2016 could be eliminated doing the same thing. It is likely unrealistic to assume that the inclusion rate can ever be pushed all the way to 10 percent, but, higher inclusion rates for 2015 and 2016 would not be unreasonable, particularly given that the 2015 and 2016 rates assumed by the EPA decline relative to 2014. So, from this perspective there is not as much of a push in the proposed conventional mandates as it may first appear.

A second critical assumption with respect to the size of the conventional gap is the level of gasoline consumption, which determines the level of the E10 blend wall. As we noted earlier, the EPA projects that gasoline use will increase 1.4 percent in 2015 and then drop by 0.6 percent in 2016. Available data for the first five months of 2015 suggest these assumptions may turn out to be too conservative. For example, the Department of Transportation reported that miles driven in the U.S. was up 4.9 percent in January, 2.8 percent in February, and 3.9 percent in March on a year-over-year basis. An increase in gasoline use of about 3 percent for 2015 would be consistent with a drop in gasoline prices of 30 percent and a short-run gasoline demand elasticity of -0.10. This is one of the assumptions used in projections listed under “Alternative Scenario 1” in Table 2. Other assumptions include a constant ethanol inclusion rate, 9.84 percent, across 2014-2016 and gasoline use increasing 1 percent in 2016 on top of the 3 percent increase assumed for 2015. Under these alternative assumptions the conventional gap is eliminated for 2015 and is more than halved for 2016. Pushing up the ethanol inclusion rate above 9.84 percent would reduce the conventional gap even further in 2016.

Our analysis shows that the EPA’s proposed ethanol mandates have very little push beyond the E10 blend wall if gasoline consumption increases at higher rates than assumed by the EPA and the ethanol inclusion rate is only slightly higher. An interesting question, then, is the level of ethanol mandates that would result in a push above the E10 blend wall near the 1.268 billion gallons under the EPA proposal, but with the higher gasoline demand and inclusion rates assumed under the first alternative scenario. These results are shown in Table 2 under the heading “Alternative Scenario 2.” The assumptions for this second alternative scenario are identical to the first except the conventional ethanol mandate is set at levels that approximately reproduce the conventional gaps estimated for the EPA proposal. With the higher gasoline use and inclusion rates, ethanol mandates of 13.9 billion gallons in 2015 and 14.5 billion gallons in 2016 result in gaps very close to those under the assumptions of the EPA proposal. This suggests the EPA could potentially increase the 2015 and 2016 ethanol mandates fairly substantially in the final rulemaking based solely on updated usage projections. This would not require any change to the waiver arguments used by the EPA in the preliminary proposal since the 2014-2016 ethanol mandates would still be less than the (implied) statutory levels.

As demonstrated by the results in the previous section, one can draw quite different conclusions about the degree of push in the proposed ethanol mandates depending on assumptions about gasoline use and ethanol inclusion rates. Taken at face value, the assumptions used in the preliminary EPA proposal imply substantial pressure for biofuels use above the E10 blend wall, while on the other hand, increasing gasoline use in line with the large drop in gasoline prices and slightly higher ethanol inclusion rates largely eliminates the pressure. It is interesting to consider which way the RINs market voted. More specifically, if expectations of RINs market participants were similar to assumptions in the EPA proposal then the price of D6 ethanol RINs should have remained high both in absolute terms and relative to D4 biodiesel RINs after the EPA proposal was released (see the farmdoc daily article on May 28, 2015 for further details). If expectations of RINs market participants were closer to those under first alternative scenario in Table 2, then D6 ethanol prices should have declined sharply after the EPA report was released last Friday.

Figure 1 shows the prices of 2014 “vintage” D6 ethanol and D4 biodiesel RINs prices over July 12, 2013 through June 2, 2015. A 2014 vintage RIN indicates the RIN is generated within the 2014 calendar year and can be used for RFS compliance in 2014 and 2015. Using a constant vintage series of RINs prices eliminates jumps in prices that can occur across calendar years due to changing vintages. Also note that any prices reported in 2013 for 2014 vintage RINs are forward contract transactions rather than spot transactions. Figure 1 clearly shows the “cliff diving” seen in the D6 RINs market since last week and this should make it obvious which way the RINs market voted with regard to the degree of push in the EPA proposal. On Tuesday, May 26 the D6 price was $0.705 per gallon and then dropped to $0.415 by Tuesday June 2, a total decline in value of 41 percent (the proposal was obviously leaked in advance of the official release on Friday, May 29). The magnitude of the loss in value of D6 RINs is further highlighted in Figure 2, which shows the ratio of the D6 and D4 prices. This ratio averaged 0.93 for most of the year preceding the release of the EPA proposal, but subsequently plunged to 0.49 on Tuesday, June 2. This is close to the lowest ratio observed since July 2013. 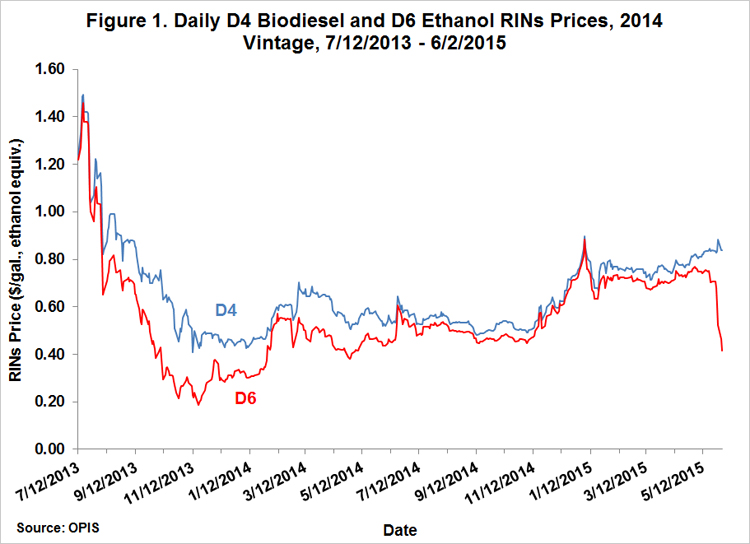 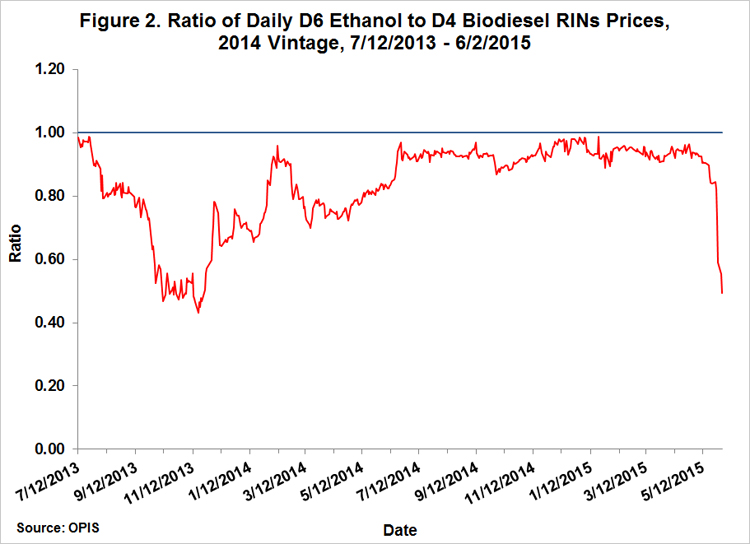 The long-awaited EPA proposal for 2014, 2015 and 2016 RFS mandates was released last week. The proposal largely confirmed expectations for large increases in biomass-based diesel but ethanol mandates were smaller than many expected. Despite the substantial cuts to the ethanol mandates, the EPA maintains that the mandates are high enough to provide a “push” to biofuels use beyond the E10 blend wall. Our analysis confirms that the ethanol mandates proposed by the EPA for 2015 and 2016 do imply some degree of pressure for biofuel volumes above the E10 blend wall, but this depends crucially on assumptions about growth in gasoline use and ethanol inclusion rates. Relatively modest increases in the rate of growth in gasoline use and slightly higher ethanol inclusion rates largely eliminate the push above the blend wall. The huge decline in D6 ethanol RINs prices in the last week suggests the market believes the EPAs assumptions are too conservative and the proposed ethanol mandates provide little pressure for breaching the blend wall. Assuming higher gasoline use and inclusion rates, we estimate that ethanol mandates of 13.9 billion gallons in 2015 and 14.5 billion gallons in 2016 would restore the pressures to increase biofuel use beyond the E10 blend wall that the EPA apparently intended in its proposal.