In November 2013, EPA proposed volume requirements under the Renewable Fuel Standard (RFS) for the 2014 calendar year. In December 2014, it announced that it would not be finalizing the standards for 2014 during that calendar year. In April 2015 it provided a timeline for proposed standards by June 1, 2015. On Friday, May 29, 2015, EPA released a proposed rule to set the volume requirements for the 2014, 2015 and 2016 years. Previous articles (farmdoc daily, November 6, 2013; January 16, 2014) evaluated EPA’s authority to waive the RFS requirements and the new proposed rule returns to that issue. This article further evaluates EPA’s waiver arguments.

Briefly, Congress passed an ambitious goal for increasing the production of renewable fuels in the Energy Independence and Security Act of 2007, known as the Renewable Fuels Standard (RFS). The 2007 version, however, was the second RFS; the initial mandate was included in the Energy Policy Act of 2005 Included within the original RFS statute and unchanged by the 2007 bill is waiver authority allowing EPA to adjust the statutory requirements if there will be severe economic or environmental harm, or there is “an inadequate domestic supply” of the renewable fuels (42 U.S.C. §7545(o)(7)(A)(ii)) (see farmdoc daily November 6, 2013 and June 3, 2015 for additional background).

As previously discussed, EPA is Constitutionally-bound to follow the statute and the clear intent of Congress; where there is ambiguity about what Congress intended, EPA is permitted a reasonable and permissible interpretation of its authority to which a court must give deference. Legal precedent on these issues was discussed in the previous articles and will not be revisited in detail. The focus in this article, however, will center around basic principles of statutory interpretation (See e.g., Whitman v. American Trucking Assn., Inc., 531 U.S. 457 (2001)) to evaluate EPA’s arguments in light of the provisions in the Clean Air Act.

The statute states that “regulations promulgated” for renewable fuels, as well as the obligation itself, are “applicable to refineries, blenders, distributors, and importers, as appropriate.” While these directives contain no mention of consumers, they clarify that the regulations shall not “restrict geographic areas in which renewable fuel may be used” nor “impose any per-gallon obligation for use of the renewable fuel.” (42 U.S.C. §7545(o)(2)(A)). The explicit wording here appears to indicate that Congress was limiting application of the statute to blenders and refiners, and that the use of the blended fuel was not to be a consideration.

The RFS is a technology-forcing mandate on the renewable fuel producers, as well as the oil refining and blending industries: Congress intended “the RFS program to compel the industry to make dramatic changes in a relatively short period of time.” (EPA, p.41). The significance is clear in a comparison with other provisions of the Clean Air Act pertaining to transportation fuels. The different components of these regulatory provisions undermines EPA’s waiver authority argument. Table 1 provides a comparison of the waiver provisions that EPA discusses in the proposed rule along with the provisions applying the regulation or instructing EPA to promulgate regulations. 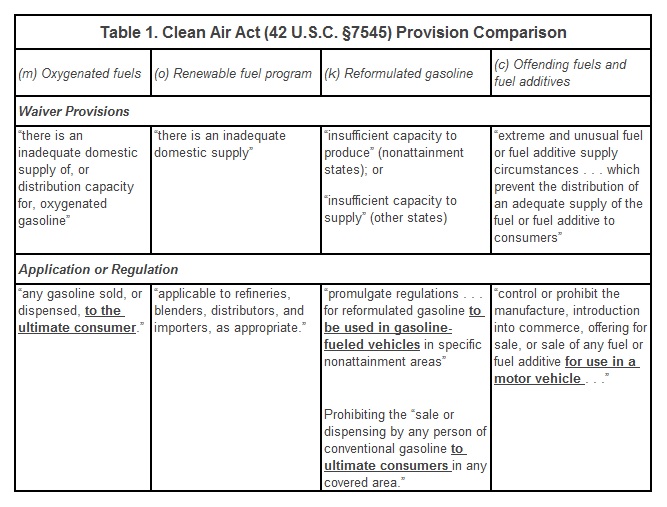 The legislative history for the RFS adds further perspective. The original version of the RFS as reported from the Committee and introduced in the House on April 18, 2005, contained the following waiver language: “that there is an inadequate domestic supply or distribution capacity to meet the requirement.” (H.R. 6 §1501(a)(8)(A)(ii)). The provision remained unchanged in the version that passed the House. The version of the bill that passed the Senate, however, contains modified waiver language that does not include that phrase and reads: “that there is an inadequate domestic supply.” (H.R. 6 (Engrossed Amendment Senate) §211(a)(2)). The original Senate amendment that served as a substitute to the House language contains similar waiver language (§204(h)), stating “that there is an inadequate domestic supply to meet the requirement.” (Senate Amendment SA775, by Senator Domenici, June 14, 2005; agreed to by unanimous consent). The legislative history therefore indicates that either the Senate intentionally removed the phrase “or distribution capacity” or that the two chambers disagreed on the issue. Either way, the final conference agreement between the two and the resulting legislation signed into law indicates that the final statement by Congress on the waiver authority did not include the “distribution capacity” phrase. This also lends support to the argument made by the ethanol industry that Congress intentionally removed the phrase so that it would not be a consideration in the waiver decision (reported here).

Finally, reading the statute in this way would also seem to align with reality about the renewable fuel mandate. The RFS is designed only for the refiners and blenders of ethanol, not the consumer of transportation fuel. The ultimate consumer is not an obligated party under the mandate; they do not purchase ethanol directly from the ethanol producer nor are they required to purchase Renewable Identification Numbers to prove compliance. In short, the mandate is not on the consumer. While EPA claims that the “waiver provision does not specify what product is at issue” in the RFS, that seems specious given the statutory wording and a comparison with other provisions in the same section. The RFS applies to renewable fuel supplied to the blenders and refiners, it contains no comparable provision applying it to the ultimate consumer. EPA fails to explain how a statute designed to put a mandate on refineries and blenders to compel them to make “dramatic changes” can also include a waiver provision to relieve them of the obligation if they do not get the product to consumers.

The very design of the statute, as EPA acknowledges, is as a mechanism to push industry. Taking into consideration that industry’s blended supply to the ultimate consumer as justification for waiving aspects of the RFS would appear to be in direct conflict with Congressional intent. Consider, for example, the discordance inherent in various components of EPA’s argument. First, it looks to the use of “factors [that] operate as practical and legal limits to how much renewable fuel can be distributed to and used by consumers” (EPA, p.34), yet acknowledges that “the renewable fuel volume targets” were developed with “the understanding that the growth . . . would be beyond any previously demonstrated ability of the industry to produce, distribute, and consume renewable fuels.” (EPA, p.41) And while “[i]t is apparent, therefore, that Congress intended to require changes that would be unlikely to occur absent the new program,” (EPA, p.41), EPA is using the waiver provisions even though “obligated parties have had years to plan for the E10 blendwall and that there clearly are steps that obligated parties could take to increase investments needed to increase renewable fuel use above current levels.” (EPA, p.34). If forcing the development of solutions to these entirely foreseeable challenges was the very point of the RFS, using the failure to do so as justification for reducing the statutory requirements would seem to eviscerate the statute and Congressional intent, rewarding the failure with a release from the obligations.

It is very difficult to square the statute’s words with EPA’s reading of them, which is pointedly highlighted by one of EPA’s comments: “biofuel producers could also have taken appropriate measures . . . nothing precludes biofuel producers from independently marketing E85 or increasing the production of non-ethanol renewable fuels.” (EPA, p.34). The RFS was designed to push the renewable fuel industry to supply, and the blending/refining industry to purchase, renewable fuels. EPA admits that “there is no shortage of ethanol” but it feels that “[l]egal requirements limit[ing] ethanol content of most gasoline to 10%” and “marketplace and infrastructure constraints” are sufficient to justify the agency’s revision of the Congressional mandate. Under this proposed rule, EPA appears to be turning the statute upside down, switching it from one that was meant to force industry action to one that permits industry inaction to override the statute.