On May 29, the World Trade Organization (WTO) announced its latest decision against the U.S. in a long-running dispute with Canada and Mexico over country of origin labeling (COOL). The WTO is the international group responsible for the rules of trade between nations, and its decision opened the door to retaliatory tariffs and other actions against the U.S. This announcement received wide coverage in the press, but left out many of the details necessary to fully understand the impact of this decision. Today’s article reviews the history of COOL for cattle and hogs, and looks at potential impact of the WTO decision on these and other markets.

As the name suggests, COOL requires meat sold in the U.S. to be labelled with information about the country or countries in which the animal was born, raised, and slaughtered. Only meat from animals for which all three steps occurred exclusively in the U.S. are eligible for the “Product of the U.S.” designation.

Interest in COOL for beef and pork got a jump-start in the 1990s, during an extended period of weak cattle prices (Figure 1). This occurred at the same time as an extended period of weakness in the Canadian dollar (Figure 2), which encouraged Canadian cattle feeders to sell their cattle across the border for U.S. dollars. These cross-border sales became much easier beginning in 1994 with the implementation of the North American Free Trade Agreement (NAFTA). NAFTA eliminated most barriers to the movement of livestock and other products within the U.S., Canada, and Mexico. 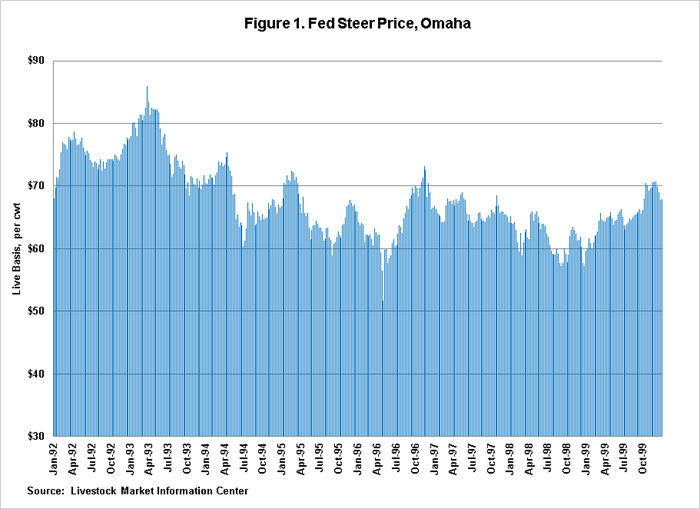 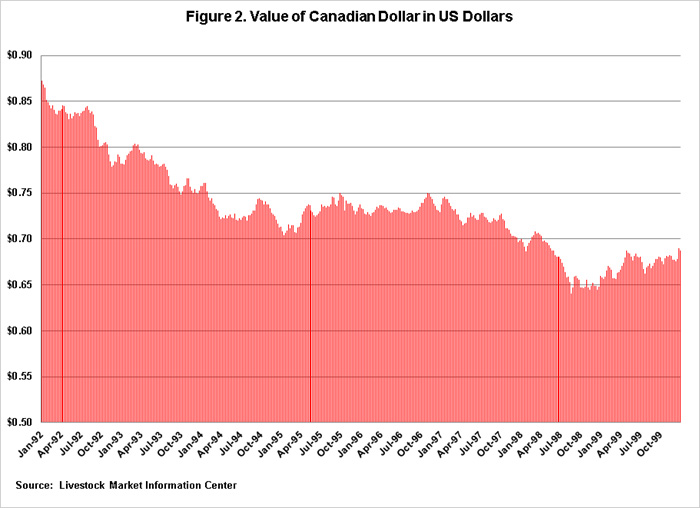 Some in the cattle industry equated the influx of Canadian cattle with weak cattle prices. Likewise, some in the hog industry blamed part of the 1998-99 price collapse (Figure 3) on Canadian hogs sold to U.S. packing plants at a time when the market was already flooded. These views helped to bring about a COOL mandate in the 2002 Farm Bill, but support for COOL within the livestock industry was far from unanimous. Among those opposing COOL were segments of the cattle industry that relied on feeder cattle from Canada and Mexico, and segments of the hog industry that relied on Canadian-born feeder pigs.

The first U.S. case of BSE (bovine spongiform encephalopathy, or “mad cow”) was discovered in a Washington state dairy cow 2003. When that cow was later traced to a farm in Alberta, the driving force behind COOL shifted from economics – propping up livestock prices by keeping out non-U.S. supplies – to food safety and the idea that consumers should know where their food comes from. These notions persist today, despite the fact that there is no inspection component within COOL, nor is there any type of traceback ability.

What COOL Covers and Who Benefits

Developing a workable COOL program was a time-consuming process because of the need to work around so many existing laws and regulations. For example, COOL applies only to ground and muscle cuts of meat, but not to cooked or processed (including cured, smoked, or spiced) products. Likewise, COOL applies only to meat sold by grocery stores and similar retail outlets, and not to restaurants or other food service establishments, despite the fact that more than half of all meat is consumed away from home.

Cost-benefit analyses found that the benefits of COOL are small and flow almost exclusively to consumers, while the costs are large and are borne by all steps in the production chain. One such study found that the net cost of COOL would be $9 per head to cattle producers and $1 per head to hog producers. Consumer surveys indicated that shoppers would like to know more about the sources of their food, but more detailed studies found that consumers are not willing to pay higher prices to cover the costs of collecting that information.

Much of the direct cost of COOL has been borne by the packing industry, which purchases animals from multiple sources and processes the resulting carcasses into hundreds of different cuts of meat. Individual cuts from many animals are then combined, packaged into boxes, and sold to retailers and food service establishments. Maintaining the identity of each piece throughout this process requires packers to segregate and process animals from the same “born and raised” countries at the same time.

The more animals there are in a particular “born and raised” category, the simpler and more efficient they will be to process under COOL. Because most animals are U.S. born and U.S. raised, these “all U.S.” animals have a cost advantage over other the other “born and raised” categories. Stated differently, animals from other countries have a cost disadvantage relative to “all U.S.” animals. This economic fact lies at the heart of the WTO dispute.

The first set of proposed rules were published for public comment in October 2003, but for various reasons it took nearly five years – until September 2008 – before COOL was implemented. All COOL supporting documents and related information are available here. In addition, detailed descriptions of the COOL development and implementation process are available here for beef and here for pork.

Once COOL went into effect, the backlash from other countries was almost immediate. To date there have been four rounds in this battle, and the U.S. has lost all four.

Round 1: In December 2008 Canada filed a complaint with the World Trade Organization (WTO), and within days was joined by Mexico. Both countries argued that COOL provided less favorable treatment to imported Canadian and Mexican cattle and hogs than to similar U.S. livestock. This “less favorable treatment” reflects the cost advantage of “all U.S.” vs. other categories discussed above. In November 2011 a WTO panel agreed with Canada and Mexico, and also found that “the COOL measure does not fulfill its legitimate objective of providing consumers with information on origin.”

Round 2: in March 2012 the U.S. appealed, and in July 2012 the WTO Appellate Body upheld the earlier decision regarding less favorable treatment to Canadian and Mexican cattle and hogs. In particular, it found that COOL had a “detrimental impact on imported livestock because its recordkeeping and verification requirements create an incentive for processors to use exclusively domestic livestock, and a disincentive against using like imported livestock.”

It also found that the burden on Canadian and Mexican livestock producers, and on U.S. meatpackers that processed Canadian and Mexican livestock, was “disproportionate” compared to the information conveyed to consumers. Although “a large amount of information must be tracked and transmitted by upstream producers for purposes of providing consumers with information on origin, only a small amount of the information is actually communicated to consumers in an understandable or accurate manner… because a considerable proportion of meat sold in the United States is not subject to the COOL measure’s labeling requirements at all.” This latter point refers to the fact that COOL applies only to meat sold by grocery stores and similar retail outlets, and not to restaurants or other food service establishments.

In August 2012, the U.S. informed the WTO that it would implement the recommendations but required “a reasonable period of time” to do so. Canada asked WTO to define “reasonable period,” and in December 2012 the WTO Arbitrator announced that the U.S. would have until May 23, 2013 to comply.

Round 3: The U.S. tweaked its COOL labeling requirements and issued new rules on May 23, 2013 – the day that the “reasonable period’ expired. Canada felt these tweaks only made matters worse and did not address the problems outlined by the WTO Appellate Body, so in August 2013 it requested WTO to establish a Compliance Panel to review this matter. The Compliance Panel announced in October 2014 that the “amended COOL measure increases the original COOL measure’s detrimental impact” because it “necessitates increased segregation of meat and livestock according to origin, entails a higher recordkeeping burden, and increases the original COOL measure’s incentive to choose domestic over imported livestock.”

Round 4: The U.S. appealed again in November 2014, and on May 29, 2015 the Appellate Body rejected the U.S. arguments and upheld the panel’s original conclusions. In its decision, the Appellate Body said that the “recordkeeping and verification requirements of the amended COOL measure impose a disproportionate burden on producers and processors of livestock that cannot be explained by the need to provide origin information to consumers” and “support a conclusion that the detrimental impact of that measure on imported livestock does not stem exclusively from legitimate regulatory distinctions.” In these statements, the WTO makes it clear that COOL has very little to do with informing or protecting consumers, and very much to do with keeping out Canadian and Mexican livestock.

Canada and Mexico immediately announced plans to impose $3 billion per year in tariffs on imports of U.S. goods. Half of this amount is expected to fall on meat products, which is important because these two countries together buy 29% of U.S. beef exports and 40% of U.S. pork exports, and are the top two customers. In addition to fruits, vegetables, and various other food products, certain high-value goods such as furniture, jewelry, and California wines have mentioned as potential targets. Canada and Mexico have said that they are prepared to impose tariffs on different items over time, including products that are totally unrelated to livestock, so no commodity area will be “safe” once this begins.

The WTO must approve any tariffs – the dollar amount, not the particular products – proposed by Canada and Mexico. But based on the language in its May decision, the WTO is likely to approve almost anything because it is tired of being strung along by the U.S. Approval is expected by the end of June, and the U.S. is likely to file an objection. The final step in this process will be WTO arbitration, which the U.S. has little chance of winning, and then the tariffs will go into effect. Complete details on the WTO dispute are available here.

On June 10, the House of Representatives voted 300-131 to repeal the livestock and meat-related sections of COOL. The Senate has not acted yet, but Canada and Mexico have made it clear that they will accept nothing short of repeal.

In 2014, 10% of all beef and 21% of all pork was exported, the result of many years of effort by the U.S. livestock industry to develop export markets as a way to boost demand and increase prices. Now these gains are in jeopardy because of an unnecessary fight with our two best customers, who also happen to be our next-door neighbors. No one wins in a trade war, so everyone should hope this issue is resolved as quickly as possible.