Net incomes on Midwest grain farms are likely to be low in 2015, potentially lower than levels experienced from 1998 to 2002, the last time commodity prices fell after a period of higher prices. Currently, most farms have strong financial positions, built as a result of higher incomes between 2006 and 2013. This financial strength presents many farmers with options in dealing with low incomes. One danger, however, is that some farmers will use this financial strength to postpone making tough decisions about cutting 2016 production costs and cash rents, potentially leading to financial stress in future years.

Beginning in 2006, corn and soybean prices increased as a result of more use of corn in producing ethanol. This new ethanol demand, coupled with grain crop supply issues in various places around the world, led to very high corn and soybean prices from 2010 through early 2013. As a result, grain farm net incomes were high in 2010, 2011, and 2012, averaging over $200,000 for Illinois grain farms enrolled in Illinois Farm Business Farm Management (see Figure 1). These 2010 through 2012 incomes were significantly above prior years’ net incomes (see July 21th farmdoc daily article for more detail). Because commodity prices likely will not sustain the 2010-2013 levels soon, the 2010 to 2013 period likely will be known as a golden age in agricultural incomes, similar to that in the 1910s and 1970s. 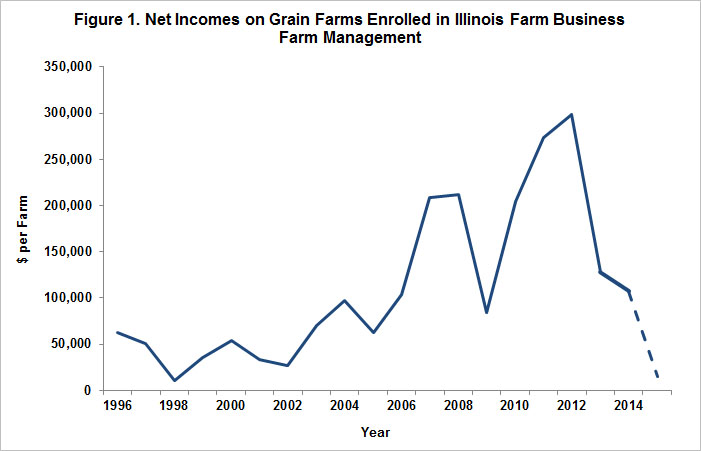 During the period of higher incomes, balance sheet improvements occurred on many farm. These improvements include:

Working capital often provides the first line of defense against cash shortfalls (see the June 9th farmdoc daily article for more discussion). A measure of working capital is the current ratio. A current ratio equals current assets divided by current liabilities and measures a farm’s abilities to pay back short-term liabilities with short-term debt. Between 1995 and 2006, the average current ratio on Illinois farms enrolled in FBFM was 1.76. The current ratio increased from 1.76 to a high of 2.86 in 2012. This increase indicates that farmers built a cash cushion for meeting obligations. Note that the current ratio decreased in 2013 and 2014 as a result of lower incomes caused by lower commodity prices (see Figure 2). 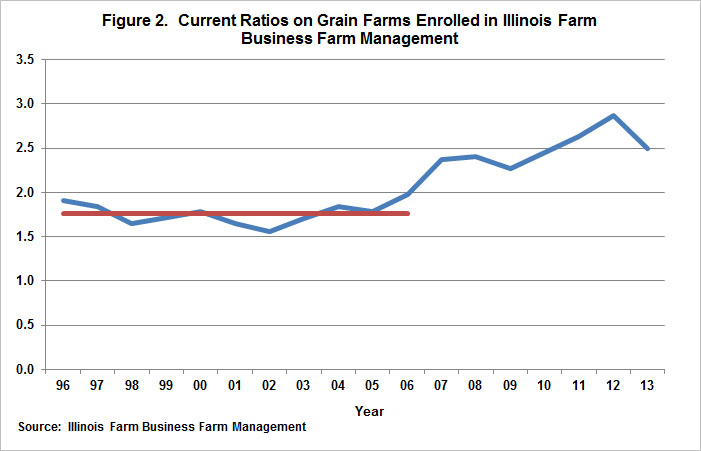 Net farm incomes in 2015 are projected much lower than in recent years. These low net incomes will lead to cash shortfalls. One way to deal with this cash shortfall is to use working capital to meet cash shortfalls resulting in reductions in cash and other current assets. Many farms should expect a significant decrease in working capital and the current ratio by the end of 2015.

On many farms, 2015 cash shortfalls will result in current ratios near or below the 1.76 average from 1996 to 2005. In essence, the 2015 cash deficit will bring these farms back to a current position similar to that prior to the 2006 increase in commodity prices. Farms in this position are more likely to have a higher proportion of their farmland cash rented at above average cash rents or began their operations relatively recently. These farmers will not have a choice. They will need to reduce cash flows related to 2016 production.

Other farms will have a current position cushion even after meeting likely 2015 cash shortfalls. These farms will have alternatives. They could postpone reducing cash flows till later, potentially hoping that commodity prices increase into 2016. At this point, current futures prices do not point to increasing commodity prices in 2016, leading to projections of 2016 returns being near the low levels projected for 2015.

The decision then is to cut costs. As most 2015 production costs have been incurred, decisions will revolve around 2016 production inputs and cash rents. Candidates for cutting include:

More on these cost-cutting decisions will be dealt with in the August 4th farmdoc daily article.

Schnitkey, G. "Working Capital: Preserve It or Use It?" farmdoc daily (5):106, Department of Agricultural and Consumer Economics, University of Illinois at Urbana-Champaign, June 9, 2015.