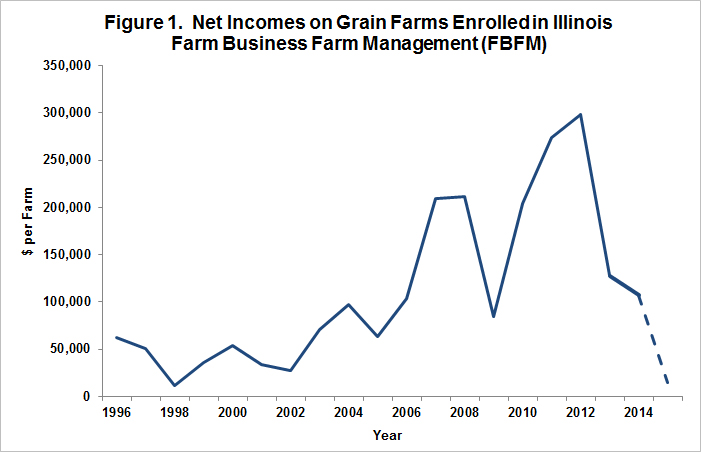 What do incomes in Figure 1 represent?

Historical values in Figure 1 are average net farm incomes of grain farms enrolled in Illinois Farm Business Farm Management (FBFM). These farms are located throughout Illinois and represent a variety of farm sizes, tenure relationships, and debt positions. Farms have increased in size over time. In 2014, average farm size was close to 1,500 acres, but the sample included many smaller farms and may larger farms. There were a relatively large number of farms of over 5,000 acres.

How was the 2015 net farm income projected?

Commodity prices, yields, input costs, and cash rents were projected for 2015. More detail on these projections are contained in the 2015 budgets which are summarized in the July 7th farmdoc daily article. Key items impacting projections are:

Can 2015 net incomes vary from projections?

Of course. Differences in prices and yields from those used in projections will change incomes. For example, corn price could easily be $.50 per bushel different from the $4.20 price used in projections. With higher prices or higher yields, 2015 net incomes could be above $50,000. However, it is difficult to build a case where 2015 incomes are not considerably lower than 2014 incomes.

Why are 2015 net incomes projected so much lower than 2014 net incomes?

These lower incomes suggest the need for continuing financial adjustments. More on the financial strength and need for adjustments will be covered in the July 28th farmdoc daily article.

Schnitkey, G. "Marketing Gains Impacts on 2014 and 2015 Net Incomes on Grain Farms." farmdoc daily (5):97, Department of Agricultural and Consumer Economics, University of Illinois at Urbana-Champaign, May 27, 2015.