The first version of the 2016 Illinois Crop Budgets is available for download from the management section of farmdoc (click here for budgets). As is detailed in the “Commentary” section of this paper, three implications are drawn from 2016 projections. First, cash flows will need to be reduced even if corn prices are above $4.00 per bushel. Two, cash rent reductions of about 30% from average 2014 levels are needed to generate farmer returns roughly the same as from 2000 to 2005. Third, keys to watch will be announcements of 2016 input prices by seed, fertilizer, and chemical input manufacturers. If these prices are at 2015 levels, adjustments to lower commodity prices must predominately come by lowering returns to farmers and landowners.

Budgets are given for corn, soybeans, wheat, and double-crop soybeans grown in northern, central, and southern Illinois. Central Illinois is further divided into categories for high and low productivity farmland. Table 1 shows 2016 budgets for corn and soybeans grown in central Illinois on high-productivity farmland (history back to 2009 is provide here). The 2015 Crop Budgets break out corn production into corn-after-soybeans and corn-after-corn production. In Table 1, only corn production is shown, which is a weighted average of corn-after-soybeans and corn-after-corn production. Similarly, the 2015 Crop Budgets break out soybean production into soybeans-after-corn and soybeans-after-two-years-corn while Table 1 reports a weighted average of those soybean budgets. 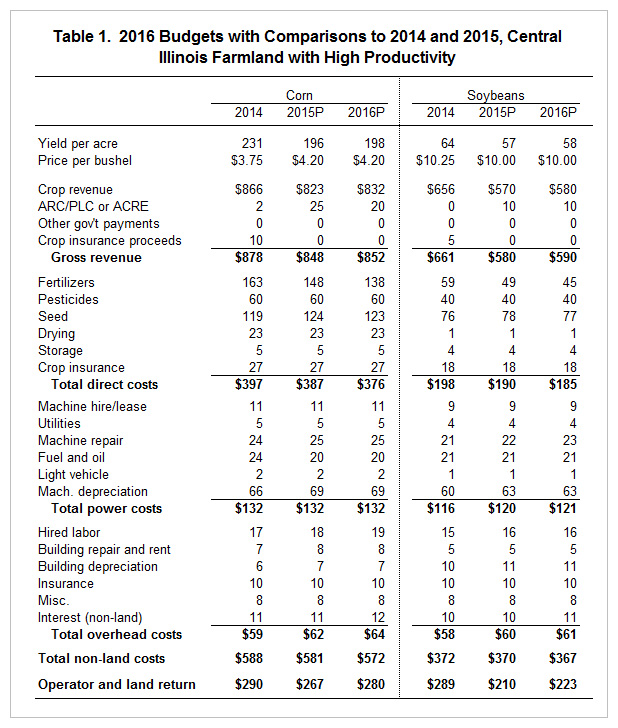 Several notes about the construction of 2016 budget:

If 2016 returns hold as projected in Table 1, farmers will have a third-straight year of losses on farmland that is cash rented at average levels (see Figure 1). In 2014, operator and land returns were below average cash rents by small amounts. In 2015, operator and land returns are projected below cash rents, indicating that farmers will have losses on cash rent farmland when rent levels are near average. Cash rent negotiations for 2016 rents will play a large part in determining farmer returns for 2016. 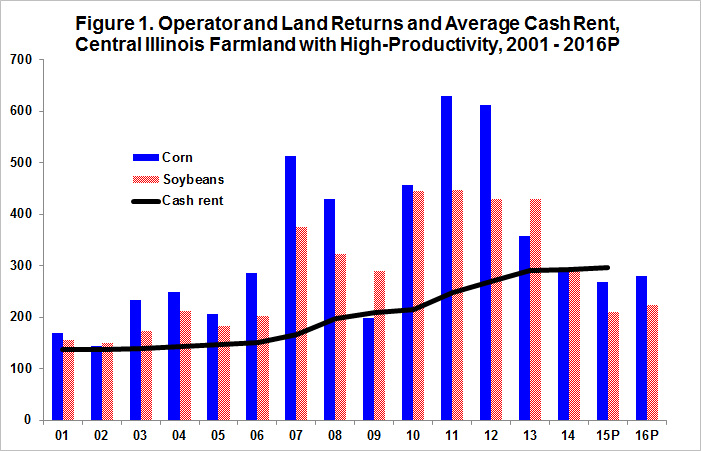 Commentary on Operator and Land Returns

The 2016 Illinois Crop Budgets will be updated as more information on commodity and input prices become available.

Schnitkey, G. "Revenue and Costs for Corn, Soybeans, Wheat, and Double - Crop Soybeans, Actual for 2009 through 2014, Projected 2015 and 2016." Department of Agricultural and Consumer Economics, University of Illinois at Urbana-Champaign, July, 2015.