This article continues a three-part series on the implications of the 2014 farm bill for (1) U.S. commitments on farm subsidies under the current World Trade Organization (WTO) Agreement on Agriculture and (2) current attempts to revitalize the Doha Round negotiations for new WTO trade rules. This article specifically addresses the fiscal costs of the crop insurance program, U.S. notifications of crop insurance to the WTO since 1995, and the potential notification of 2014 farm bill support to the WTO. These considerations take on meaning given the way the 2014 farm bill was materially affected by WTO decisions. Specifically, U.S. cotton does not have access to the ARC and PLC multiple year support programs due to resolution of the Brazilian WTO suit against past U.S. cotton support.

Information on U.S. notifications comes from submissions to the WTO Committee on Agriculture (series G/AG/N/USA, available at https://www.wto.org/). The most recent U.S. domestic support notification (G/AG/N/USA/100) is for crop year 2012, submitted December 4, 2014. More extensive information on U.S. crop insurance is at the website of the USDA, Risk Management Agency (RMA).

The first article in this series (farmdoc daily July 16, 2015) documents the growth in the U.S. crop insurance program since 1996 and notes some key domestic policy issues that will likely frame the debate on crop insurance for the next farm bill. In particular, the article notes that average annual net insurance payments to farms in excess of the premiums paid by farms (net indemnities) increased from $0.7 billion during the 1996-2000 crop years to $6.8 billion during the 2010-2014 crop years. Other key public costs of the crop insurance program are 1) the government’s share under the Standard Reinsurance Agreement (SRA) of underwriting gains and losses by private insurance companies and 2) reimbursement for private insurance administrative and operating costs (A&O) incurred to deliver the publically subsidized insurance products.

The most stable cost is A&O which is based on premiums written and is capped under the SRA negotiated in 2010 between the federal government and the private crop insurers. Over the 2010 to 2014 crop years, A&O costs averaged $1.4 billion, or 16% of total government costs. Almost all of the rest of government cost is reflected in the premium subsidies to farms. During the seven years, the government’s underwriting gains and losses resulted in a gain (i.e., reduced the public cost of the insurance program) in four. The one year in which underwriting losses were a major cost to the government over this period was the drought year of 2012. Crop insurance resulted in average underwriting losses to the government of around $0.3 billion over the seven crop years, summing to $2.4 billion. Underwriting gains of the insurance companies averaged $1.2 billion and summed to $8.3 billion (see calculation notes to Table 1). 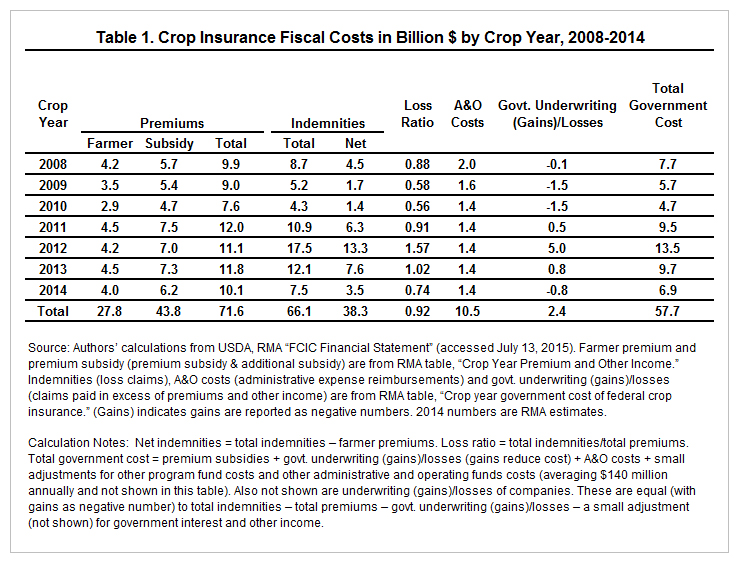 Under the current WTO Agreement on Agriculture, the U.S. faces a single limit of $19.1 billion per year on the sum of certain domestic support as measured by what is known as the “Current Total Aggregate Measurement of Support” (CTAMS). The WTO rules allow calculated “AMS” support to be excluded from counting in the CTAMS if it remains below 5% of the value of production of a product. A second so-called “de minimis” exclusion threshold of 5% applies to general support compared to the total value of agricultural production. The first exclusions are called “product-specific” de minimis; the second is called “non-product-specific” de minimis. Exceeding a de minimis threshold means all of the support (not just support above 5%) is counted. A country must watch each of these constraints, with the key being the limit on CTAMS. Exceeding the CTAMS limit would necessitate the U.S. reducing support to remain in compliance with its commitment, which it can under a “circuit breaker” provision in the 2014 farm bill.

Additional rules also determine what support counts in the CTAMS. So called “green box” measures are excluded because they are considered to “have no, or at most minimal trade-distorting effects or effects on production.” Government income insurance programs and relief from natural disasters can be counted in the green box, but only if losses exceed 30% compared to preceding years and if income payments compensate for less than 70% of a producer’s loss.

The U.S. has never claimed that its crop insurance payments fit in the green box. From 1995 through 2007, the U.S. notified its total net insurance indemnities as non-product-specific support. The argument was that crop insurance provisions were generally the same for all crops for which insurance was available. During these years, total U.S. non-product-specific support never exceeded the de minimis threshold and thus net indemnities never counted against the U.S. limit on CTAMS.

The U.S. made another change in its WTO notifications of crop insurance in 2014. Starting with the 2012 crop year, the U.S. began notifying crop insurance premium subsidies as product-specific support. While this more closely reflects the crop-specific and location-specific character of crop insurance policies, it also is a non-trivial change. To illustrate, for 2012, insurance premiums caused notified product-specific support to exceed the 5% de minimis threshold for 12 crops. Out of total premium subsidies of $7.0 billion, a total of $2.0 billion (mostly for cotton, sorghum and wheat) is thus counted in the CTAMS. Because other crops (except sugar) did not exceed their de minimis thresholds, and because non-product-specific support was below the de minimis threshold, the annual CTAMS was only $6.9 billion, well below the U.S. limit. As with the shift in 2008 to notifying premium subsidies instead of net indemnities, the change to notifying crop insurance as specific to individual crops may work in favor of U.S. farm policy supports staying within its WTO limit in some years and against it in other years. This change, as with the changes in 2008, alters the interaction of U.S. farm policy with WTO requirements.