The sharp drop in crop prices since 2012 has focused attention on the question, “Will input prices follow crop prices lower?” To provide historical perspective on this question, this article updates and recasts a November 14, 2014 farmdoc daily article, “U.S. Farm Input Price Dynamics, 1981-2013.” Input prices are found to change in the same direction as crop prices, but the relationship varies by input. The relationship grows over time, with the adjustment process taking around 5 years. However, changes in crop prices explain only part of the change in input prices.

This study uses indexes for all crop prices received by U.S. farms and prices paid by U.S. farms for 6 input categories – ag services and rents, chemicals, fertilizer, fuels, machinery, and seed. It would be nice to examine rent separately, but such data does not begin until 1990 while price indices for ag services and rents start with 1971. The price indices for rent, and ag services and rent have a high but not perfect correlation. Thus, findings can vary for these two input categories. Annual price indices end with 2014, but 2015 is included by averaging the monthly indices for January through July. The price data are from the U.S. Department of Agriculture, National Agricultural Statistics Service Quick Stats website. Because general price inflation likely impacts inputs differentially, price indexes are deflated by the Gross Domestic Product (GDP) implicit price deflator. This deflator is usually considered the best measure of general price inflation in a country’s economy. Source is the Federal Reserve Bank of St. Louis, Federal Reserve Economic Data (FRED) website. The deflated price indices have a benchmark value of 100 for 2011. 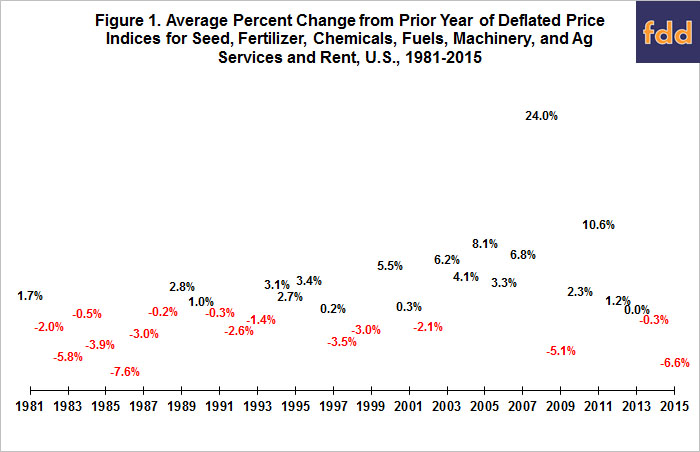 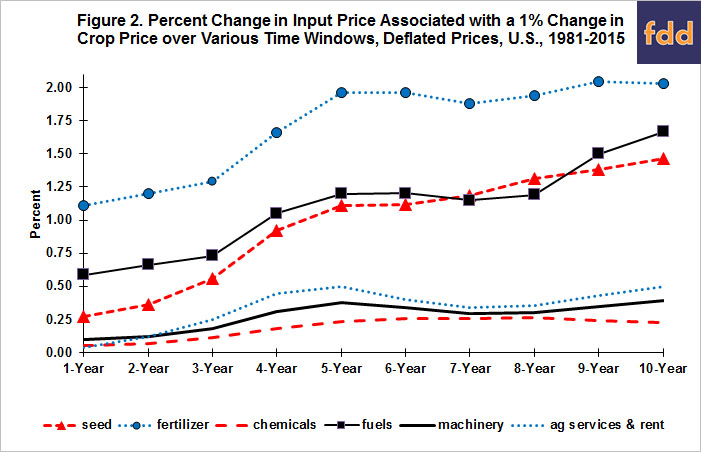 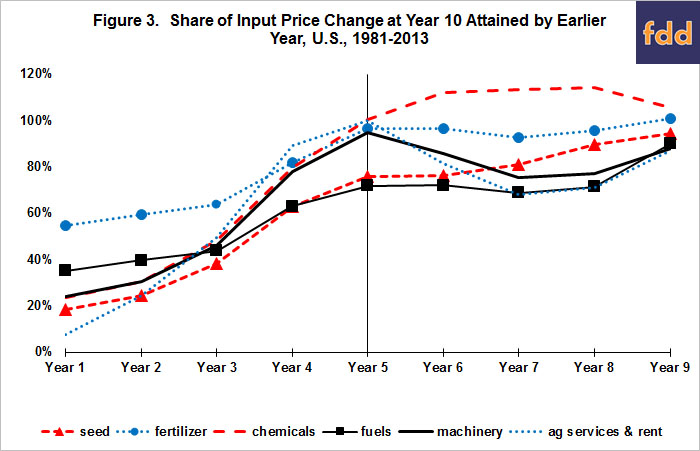 Factors other than change in crop prices affect the change in input prices over all time windows, but especially shorter time windows. To illustrate, the variation in percent change in real price index of an input explained by the variation in the percent change in real price index of crops at the 1 year time window is 1% (ag services and rent), 4% (chemicals), 13% (fuels), 15% (machinery), 19% (seed), and 41% (fertilizer). At the 10 year time window, the shares are 30% (chemicals), 39% (machinery), 42% (ag services and rent), 50% (fuels), 77% (seed), and 81% (fertilizer). While the shares are notably larger at 10 years, they tell us that even after 10 years and except for fertilizer and seed all other factors are as important as and usually more important than the change in crop prices.

This assessment is simple. Many potential factors that could affect input prices are not examined. In addition, the past never perfectly predicts the future. Each period has unique factors, although it is often not clear at the time what the current period’s unique factors are. Nonetheless, simple assessments using historical data can help draw the box that surrounds an issue; in this case the adjustment of crop input prices to changes in crop prices. Given the important caveats noted earlier in this paragraph, this simple assessment suggests the following implications.

This publication is also available at http://ohioagmanager.osu.edu

Schnitkey, G. "Parameters for a 2016 Cash Rent with Bonus. " farmdoc daily (5):165, Department of Agricultural and Consumer Economics, University of Illinois at Urbana-Champaign, September 9, 2015.